Scientists will soon be starting a new journey to find evidence of a new particle, the dark photon. These photons are believed to be the bridge between visible matter and dark matter. Visible matter is defined as the matter that makes up the things around us that we can see and observe, whereas Dark matter is thought of as the invisible matter lurking in the Universe. If such evidence of the existence of dark photons is found, then this might change our understanding of physics forever. It is a known fact that there is more gravity that holds the Universe together than can be accounted for by visible matter. From this information, physicists draw the conclusion that around 85% percent of our Universe is Dark and unaccounted for.

It is believed that the Dark matter doesn’t interact with the known electromagnetic spectrum and hence is invisible to us even through the different instruments that detect various waves. Now for the dark matter hypothesis to hold true, it is essential that another force exists that creates an interaction between the dark and the visible matter. This force according to researchers may be made up o ‘dark photons’ that transmit this new force in the same manner as light photons transmit the electromagnetic force. Sergei Gnineko from the European Organization for Nuclear Research (CERN) explained this using a metaphor and said, “To use a metaphor, an otherwise impossible dialogue between two people not speaking the same language (visible and dark matter) can be enabled by a mediator (the dark photon), who understands one language and speaks the other one.” 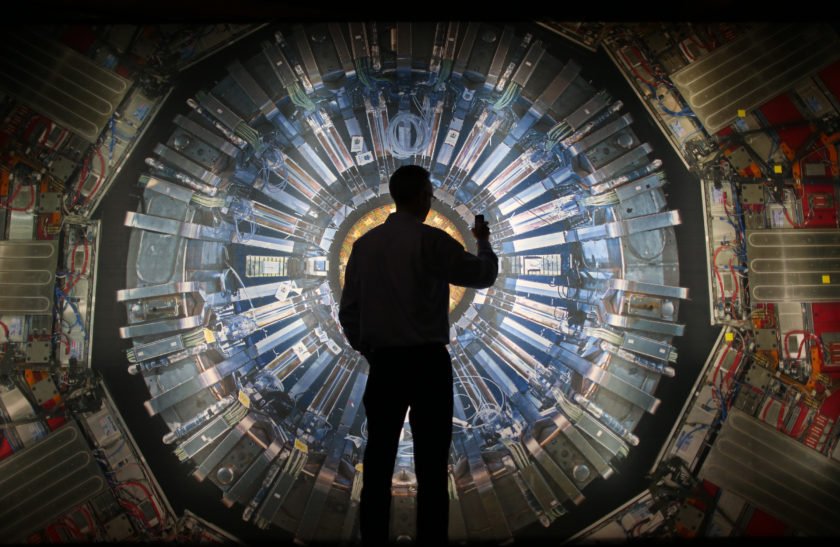 NA64 and the existence of Dark photons

Despite the fact that many researchers are in favor of this hypothesis, no one yet has found anything conclusive on the existence of dark photons. This might change soon enough because an international team of researchers from CERN, the same organization that discovered the Higgs boson are getting ready to perform experiments to look for the dark photon. This project is being referred to as the NA64 and it is going to observe interactions between the two forms of matter using the conservation of energy concept that the total energy of a closed system remains constant over time. The team is going to try and create an isolated system so that the amount of energy within that system can be accurately measured. Photons will be created from beams of electrons inside a particle accelerator and energy changes will be monitored. Energy changes inside a closed system will indicate that something ‘invisible’ is active inside the system, possibly dark photons.

The team explained, "A beam of electrons, whose initial energy is known very precisely, is aimed at a detector. Interactions between incoming electrons and atomic nuclei in the detector produce visible photons. The energy of these photons is measured and it should be equivalent to that of the electrons. However, if the dark photons exist, they will escape the detector and carry away a large fraction of the initial electron energy." Based on the amount of energy that is lost within the system, the team will ascertain a ‘signature’ of the dark photons as a suggestion that they actually exist. This signature is not exactly a confirmation of their existence; it is just a strong hint towards their existence. Until a photon is discovered the work will remain entirely hypothetical.
Understanding Dark matter is essential as it might alter the way we look at the universe. It will help us understand the different forces gravity. It isn’t yet announced when we will receive results from the NA64 project but we are eagerly waiting for the results.