You may consider the latest Bend-Gate or the troubling two iOS updates may be responsible for making this September quite a bad memory for Apple. However, it started well before these two with the leak of celebrities' private photos. It was discovered that a flaw in iCloud was responsible for this hacking attempt which targeted a number of female celebrities. Turns out, Apple has been much more responsible in this case as the company was aware of the loophole 6 months before the celebgate happened.

The onslaught of numerous nude photos or celebrities took the digital world by a storm. The buzz around it was just dying down with the latest - may we say more interesting to the end user - bend gate development and iOS 8 fuss-ups. However, the celebrity photo leak will take up some life again after it has been discovered that the flaw in Find My iPhone security feature was known to the Cupertino giant some six months back. The celebrity photo leak was followed by Tim Cook addressing the issue on how existing security problems led to the unfortunate hacking success.

London based security expert, Ibrahim Balic, has revealed today that he had discovered the aforementioned loophole more than 6 months ago back in March. He was able to test around 20,000 passwords and guessing the correct ones by the brute force attack. Balic claims, and proves his claims with screenshots of his communication with Apple security department, that he had reached up to Apple about his discovery of the flaw. The matter was first discussed on fixing this loophole but after a month, Balic received the response "Do you believe that you have a method for accessing an account in a reasonably short amount of time?" making the process stop.

It is unreal why would the security experts at Apple take a loophole with disregard. It is quite possible that the company will face increased probing from the celebrities' lawyers and activists' side after this discovery that Apple was indeed aware of the flaw before this unfortunate incident happened. May be take the submission forms a tad more seriously in future for the sake of users' privacy and security? We could only dream. 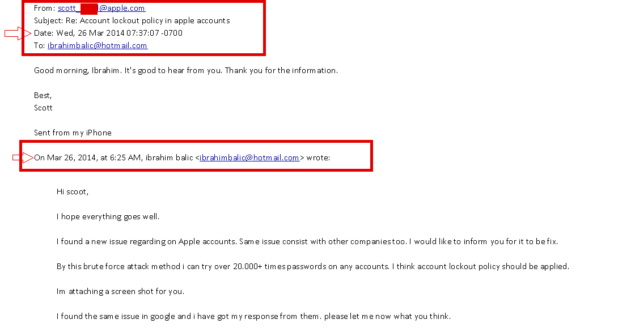 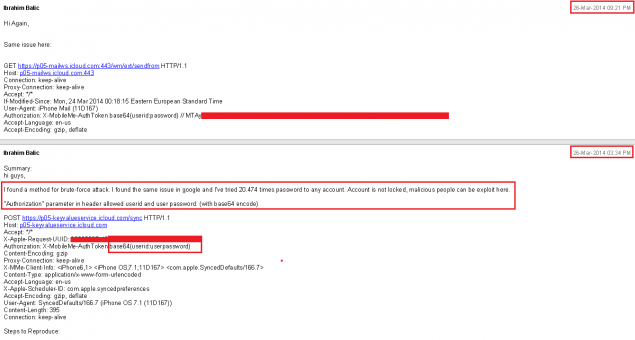