Carrier Billing Added To iTunes In Some Markets By Apple

Apple has introduced a new billing operation for the payment of its apps after the long inception of iTunes Store. The iTunes Store now includes carrier billing option that allows users to purchase apps and media through iTunes and have the charges billed via the mobile phone bill. This is a diversified process of payments and will hope to increase app purchases since the target market has been widened.

Currently, the new billing method is in works in Germany for iTunes customers who will integrate their phone number with their specific O2 carrier. Hopefully, Apple will add more markets to the new billing option in the coming days.

Let's see some additional details about the new billing method through carriers and how it may impact the overall payment procedure.

Apple has opened a new dimension in terms of paying for apps on various platforms like the App Store and Apple Music. More on this is yet to hear from Apple, but according to the owner of O2, Telefonica, the cooperation between the two has been confirmed relating to the carrier billing option. An O2 spokesperson provided a statement to TechCrunch,  “payment via the O2 phone bill is now available for Apple Music, iTunes, App Store and iBooks Store purchases.” 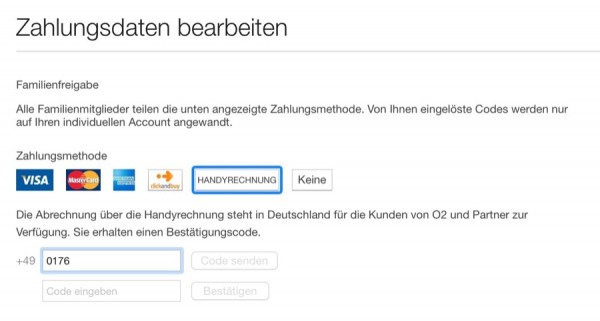 By the beginning of November, all prepaid and postpaid O2 customers will be open to avail the carrier billing service. The service is being gradually spread which will take a little while until the whole region is supported by carrier billing option for the purchases of apps and media on various platforms. Prepaid customers will adhere to their purchases in debit from their prepaid amount. As for the postpaid customers, the amount will be part of their phone bill directly and there will be no need for any credit or debit card.

As heard by TechCrunch, Bango and Apple may have partnered for the provision of this service. Bango deals in the provision of carrier billing service which has previously provided other companies with the same service, including Amazon. The carrier billing option is a viable service for users in emerging markets where there are restrictions in eligibility criteria to apply for credit or debit cards.

Apple has various methods of users' payments for apps and media, some of them being the direct integration of the iTunes Store with credit or debit card, Paypal and iTunes gift cards. Carrier billing will be another such method of payment for users.

This is it for now, folks. What do you guys think about carrier billing? Is it an easier way to pay for purchases on the iTunes Store? Let us know in the comments.