Does anyone remember the Carmageddon series of games? The homicidal vehicular homage to the 1975 cult-movie Death Race is finally making it's way back to our hearts. Carmageddon: Reincarnation has been living in Steam Early Access since March of 2014, but now that status is finally being swapped for a full-blown release. 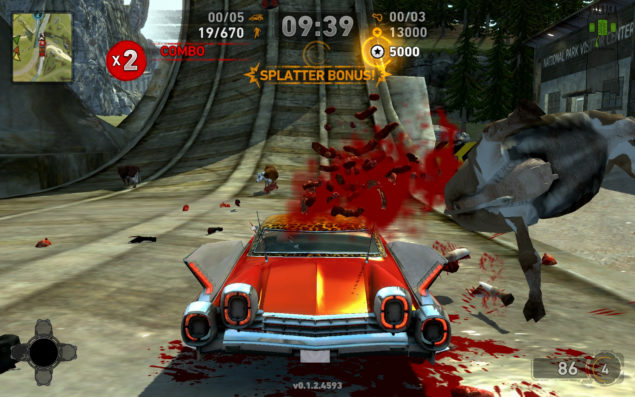 You can expect to see the new Carmageddon: Reincarnation game on sale on Steam on April 23rd, which is not too far away. If you've been a fan of the previous games, also re-released on PC, Android and iOS, then you may very well enjoy this reboot. All of the glorious brutality that you remember will be back and in higher resolution detail this time.

As a reboot of the series, Carmageddon: Reincarnation will capitalize on the previous installments success and implement a very similar style of play. You race a car against opponents in various environments with the ability to produce a tremendous amount of mayhem. There are four envionrments for your racing pleasure included, that of a snowy, an industrial, a bleak city and Dusty Trails National Park. A total of nine maps will be available on launch.

There will be a plethora of crazy and wild characters, some new and some old. The cars will be a part of their personas, adding a bit of flair to their personalities that does indeed hearken back to cult-classics like Mad Max and Death Race. Max Damage and Eagle R are back, as are Die Anna and Hawk R. You can also play as Val Hell and Cleaver, Kutter and Countslash, Don Dumpster and The Plow and many others as well with 25 in total. The names and bio's they've come up with for their characters are simply hilarious.

There should be 16 chapters within the solo career mode with a total of 50 separate racing events. Also included is a multiplayer mode that supports up to 8 players. Head on over to the Steam page to check out the game and enjoy the Early Access until the hard release, or just enjoy the trailer we have below.