NVIDIA's DLSS technology has gained a lot of traction in the past few months, landing in both major AAA gaming titles and gaming engines. The technology has now landed in Call of Duty Warzone and with it, brings a massive performance improvement of up to 70% in overall FPS.

NVIDIA Brings DLSS 2.0 Technology To Call of Duty: Warzone, Boosts FPS By Up To 70%

NVIDIA got the head start with its AI-based supersampling technology all the way back in 2018 when Turing based GeForce RTX 20 series was introduced. DLSS 1.0 had a pretty rough start & there weren't plenty of games that used the feature and while users got to see some impressive performance gains, those also came at a loss of image quality which was often too blurry when compared to playing at native resolution with standard AA methods.

That changed over time and DLSS 2.0 showed the true form of the feature with the still impressive gains while retaining almost similar image quality as the native resolution. As of now, the tech has seen major updates with The Medium and Cyberpunk 2077 being the latest highlight titles and enablement of gaming at 8K on a single graphics card.

For gamers, only GeForce RTX GPUs feature the Tensor Cores that power DLSS, and with DLSS now available in over 40 titles and counting, GeForce RTX offers the fastest frame rates in leading triple-A titles and indie darlings. - NVIDIA 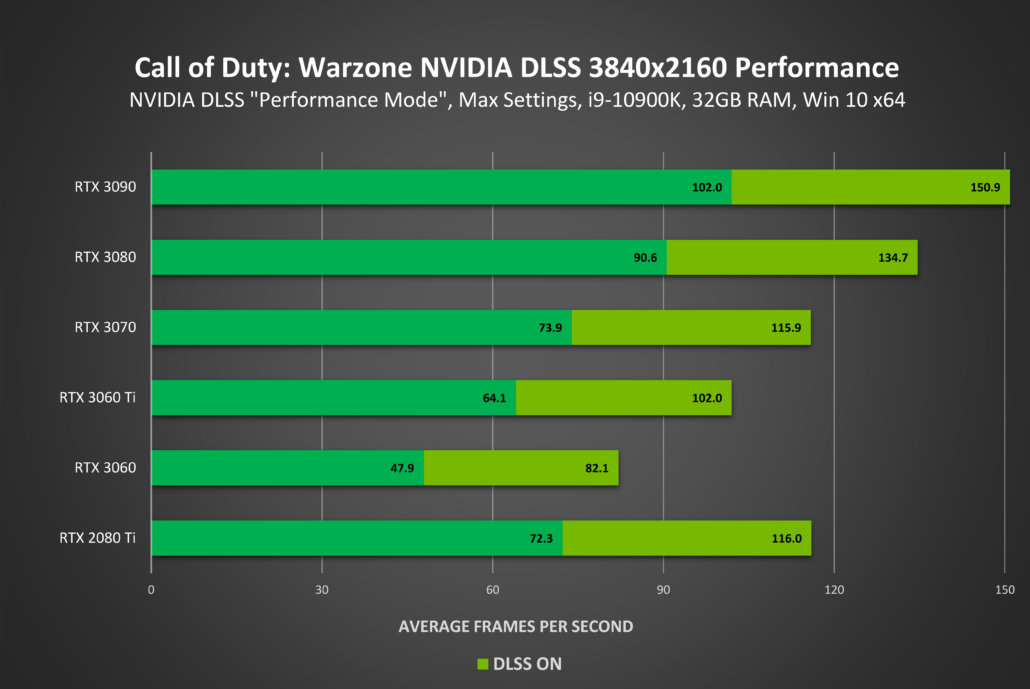 In the official performance metrics published by NVIDIA, it is shown that even with the NVIDIA GeForce RTX 3060, users are able to get more than 60 FPS at 4K resolution. For users running higher refresh rate monitors, they can expect over 100 FPS at 1440p and over 150 FPS at 1080p while playing the fast-paced battle royal shooter.

For those who are not interested in the battle royale mode of the game, the DLSS update is also available for Modern Warfare which shares the same engine so if you're planning to revisit the game, having DLSS enabled would lead to a much smoother gaming experience. Aside from the Warzone and Modern Warfare titles, the DLSS update is also available for Black Ops: Cold War's Zombie's multiplayer and campaign modes.