Gaming is a growing industry. I may say that a lot, but that's because it is. I've spoken at lengths about the growth in the games industry and this is certainly the case in the UK. Ukie, the trade body for both the UK's games and entertainment industries, have collated figures from a number of sources to generate this report that shows the UK games industry has grown by 1.2% to reach £4.33bn in sales.

Ukie have sourced and combined data from GfK for physical games as well as hardware. Superdata were used for digital, mobile and VR hardware. Kantar were used for pre-owned sales information. Everything else, ranging from books, soundtracks and even the events surrounding gaming are from either NPD, Nielsen, ABC, the official charts company or Ukie themselves. While only a reflection of the UK games industry, it does seem to fall in line with things we've already covered. 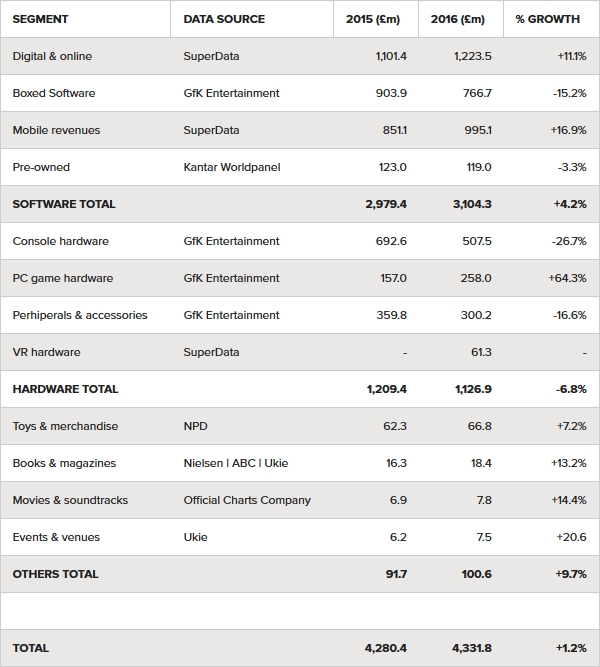 What should be immediately noticeable is the growth everywhere bar physical goods. Boxed Software, console hardware and peripherals and accessories all suffered from significant reductions in sales. Pre-owned sales also took a hit, though nowhere near the same extent as the rest. There is one large exception to this trend, which will be covered a little later.

The reduction in console hardware is to be expected as the current generation of consoles matures. People generally have the console they want which means the sales are from fans expanding into another format or from replacing older systems. The two things that propped up console hardware sales in 2016 was the release of the PlayStation 4 Pro by Sony (TYO:6758) and Microsoft's (NASDAQ:MSFT) Xbox One S, a slightly improved and smaller version of the Xbox One. 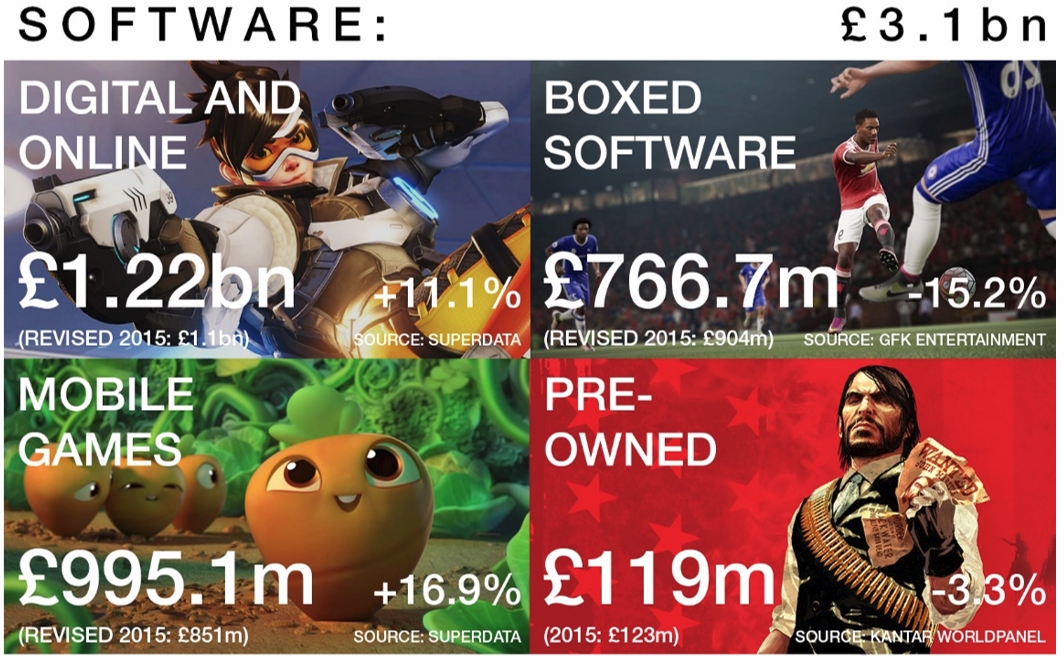 What seems interesting at first is the shrinking of pre-owned software. What is indicated in the report is that the number of units sold has actually increased. However, this was masked by the average price per unit falling. Games companies have long opposed pre-owned games. Numerous attempts have been made to profit from or actively stop them, but to no avail. With the number of games sold increasing, It's an area that doesn't look like it'll disappear for a long time.

The actual number of sales increasing for pre-owned diametrically opposes boxed software sales. Boxed software has lowered by a large amount, but this was more than made up by digital sales and mobile games. In all, video games sales passed the £3bn mark for the first time ever.

The Suffering of Stores

These figures highlight something I covered just two months ago; the retail sector need to diversify. Game (LON:GMD), the UK's leading retailer of video games, has already branched out in this regard. They own Multiplay, an eSports platform which is a growing area of the industry. They also own an augmented reality company called Ads Reality, which can be used to craft more enticing advertisements for consumers.

While these figures only cover the UK, there's enough indicating this same trend globally. Gamestop (NYSE:GME) are scheduled to release their Q4 figures this month, but trends from the first three-quarters indicated the same fall in physical console hardware and software sales.

Similarly, peripherals and accessories have fallen by a significant amount. This has impacted on retailers and companies alike. One such company is Mad Catz (NYSEMKT:MCZ) who are at almost certain threat of being delisted from the New York Stock Exchange. We previously covered this threat of delisting due to share price, but following on from that was a notice of noncompliance due to the company's stockholders' deficit. 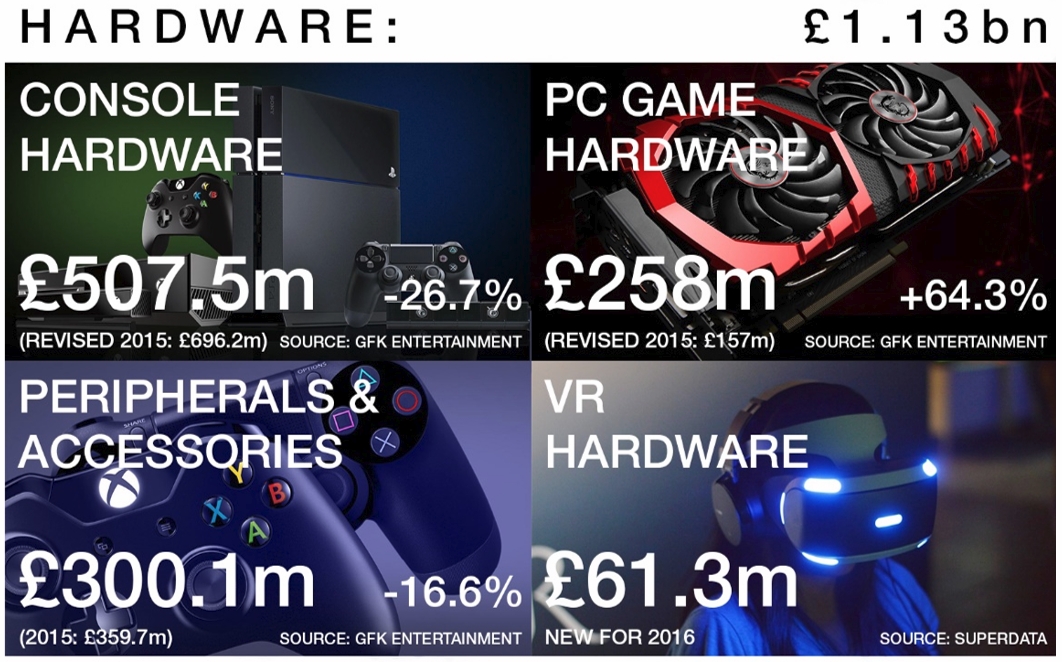 Merchandise, toys and other game related products have been a growing area for stores over recent years. As certain games take off, the rise of related clothing, toys and book sales also increases. The success of Minecraft and Pokémon Go, for example, has them with a host of related products that have literally occupied sections of stores. The increased sales of these has been one of the few, with pre-owned titles and digital goods, growing areas for gaming stores.

Of course the success of game related films also contributes to this growth. 2016 saw the release of Ratchet & Clank, Angry Birds and Warcraft movies at both the box office and on DVD/Blu-ray. Assassin's Creed was also released at the box office towards the end of the year. In the UK alone these titles breached $25m (£20m) in box office revenues, generating over $1bn worldwide according to Box Office Mojo. However, these aren't included in the figures, but related DVD/Blu-ray and soundtrack sales are.

The surprise area of the study comes from PC game-related hardware sales, where it saw a huge increase. VR Hardware sales, and the requirements of VR Hardware on the PC certainly had an impact on sales of upper-end graphics cards. Beyond that, the growth of the PC as a whole has pushed these sales.

Driving this move to the PC will also be the huge success of titles like League of Legends, World of Tanks and of course the subscription based World of Warcraft. While none of these require a more advanced PC, a player who actively plays games on the PC will invariably look at other titles and branch out. This has also combined with the ease of access that comes with Steam. As Valve have expanded the reach of their platform the number of users has grown in accordance. Adding onto this is the draw of titles that require a PC with more powerful components to get the best experience, at least visually, that the game can offer. 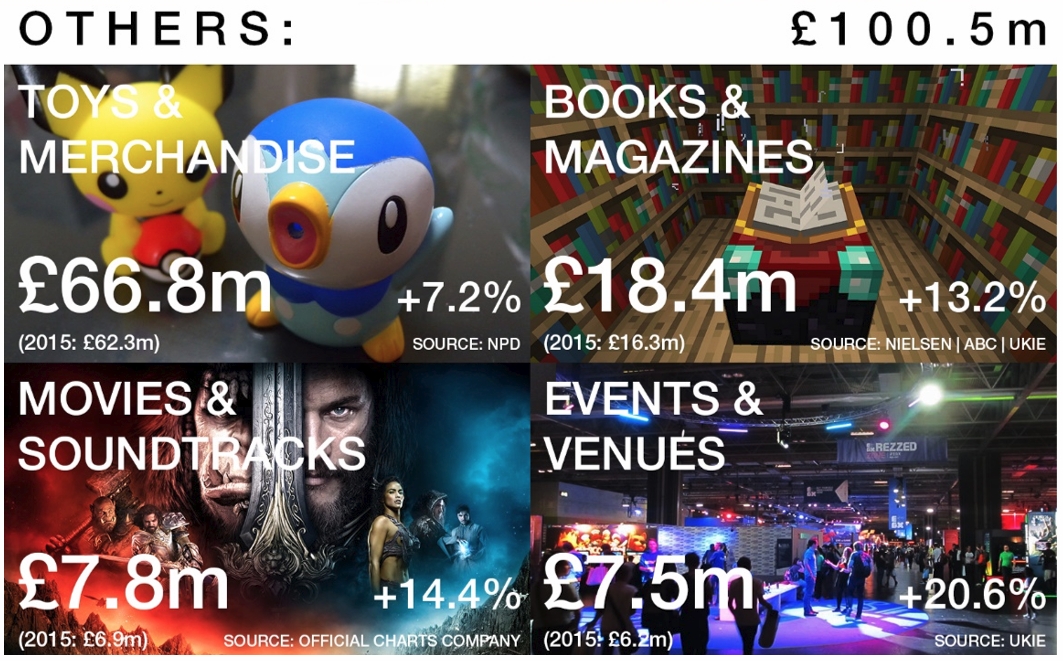 What shouldn't come as a surprise is the growth of mobile. Mobile gaming is now the biggest revenue earner for the games industry worldwide. This is largely driven in the Asian market, whereas here in the west we have a preference for home consoles and the PC. However, mobile is growing significantly. Mobile accounted for 32% of games revenues in 2016 and will likely expand beyond that in 2017 as companies like Nintendo release more and more large titles in their expansion to mobile. Nintendo, for example, will be releasing Super Mario Run on Android devices in just four days.

The Future of the Industry

Growth is expected this year, this much was revealed in a survey by TIGA. 2017 will likely see a year unaffected by Brexit or the ramifications that it may or may not have on the economy. Although spending power is lowered by inflation and low wage rises in the country, the games industry is something that has long shown a resilience to such factors.

The retail market hasn't shown the same resilience. Despite any new launches, the retail sector still desperately needs to expand. Game (LON:GMD) have been limited in their plans. As of now the expansion of events, venues and their links to the eSports sector offers their strongest position to capitalise on. Potentially taking the same route as GameStop and publishing selected games could be a strong move. Until stores embrace and make the transition into the digital market with the games themselves, they will struggle.

Console hardware has likely found itself a saving grace this year again with the launch of the Nintendo Switch. Nintendo (TYO:7974) has sold through an estimated 1.5 million consoles worldwide. 80,000 units were reportedly sold during the launch weekend in the UK. With the early success of the console, Nintendo are doubling intended production. This could result in a sizable boost to console hardware revenues. In addition, Microsoft also plans to release Project Scorpio during the holiday season, their competitor to Sony's PlayStation 4 Pro.

Just how much growth comes remains to be seen. The expansion of eSports and related events will certainly make an impact. There is also potential for the VR market to expand as new units become available. Shortage of the PSVR is well documented, due to underproduction and higher than expected demand. Should sales increase, this will also drive software sales as more VR games add to an already growing area. What seems certain is the move to digital software will increase and this can expect to continue. As the year progresses, this will be an interesting industry to watch.