The publication FanlessTech recently posted an exclusive piece on an upcoming Intel Broadwell NUC. This one is particularly special because it not only supports 4K resolution but also houses the Iris Pro 6100 Graphics, an iGPU from Intel of really awesome power.  This is great news for casual gamers because the presence of a DX12 capable iGPU in such a small package will definitely pack quite the (value) punch. 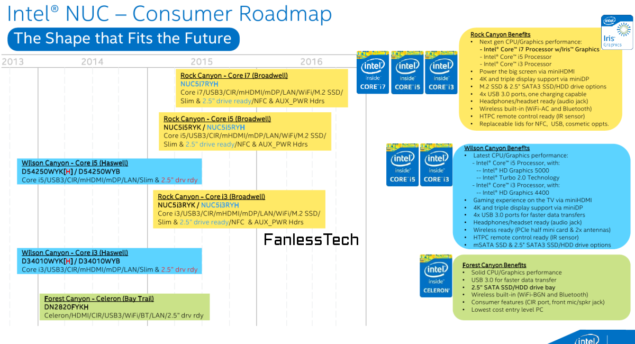 The NUC5i7RYH will feature an i7-5557U, dual-channel 1.35V DDR3L SODIMMs (1333/1600/1866 MHz, up to 16GB) one mini HDMI 1.4a, one mini DisplayPort 1.2 and four USB 3.0 ports (one charging capable). Interestingly, the TDP is actually 28W which is a bit higher than the average (15W). With almost double the TDP, this fanless NUC is going to need one hell of a passive cooler and will most definitely be the flagship SKU. According to the source, one such super case is in the works. 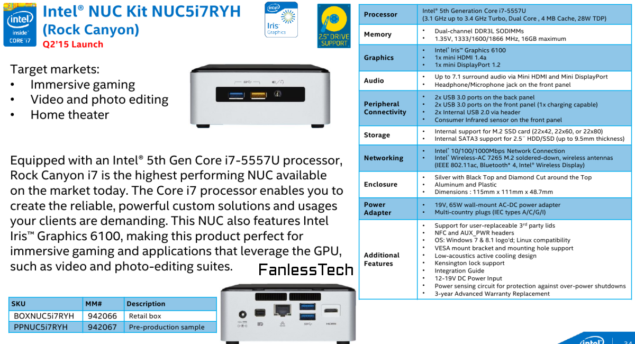 The NUC5i7RYH is part of the Rock Canyon flagship platform and will be the highest end part in Intel's offerings. It appears to be the only unit with TD of 28Ws, which can be excepted given the generous amount of graphical power on board. Another reason could be the fact that there had been reports suggesting that Broadwell was facing power problems with higher current needed to maintain high clocks. If that is true than the rest of the Broadwell offerings will clock in at 28W too, which seems unlikely to me.

The NUC will launch sometime in Q2 2015, before which the Pre Production sample will ship to reviewers. This little box will be ideal for a serious HTPC that should have the potential to not only offer seamless blue-ray playback but be able to run casual games as well. The ultra small form factor also makes it ideal for office applications allowing Intel to position itself against Apple's Mac Mini. The Next Unit of Computing platform has incredible potential and could turn out to be a major income source for Intel if they play their cards right.