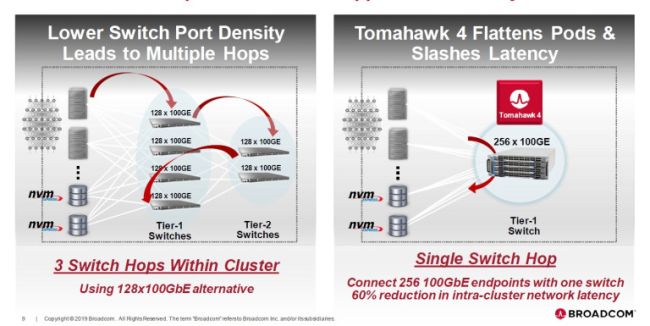 Broadcom has started sending out its Tomahawk 4 switch to cloud providers like Microsoft and Alibaba. The chip offers 31 billion transistors on TSMC's 7nm process and has 64 ports of 400 GbE switching.

Broadcom has officially started sending out its Tomahawk 4 switch to significant cloud providers!

This switch is currently the first that is capable of 25.6TBps. Many large cloud providers like Google, Microsoft, Uber, and Tencent are all early adopters which makes sense as these larger cloud providers utilize faster internet to make their cloud services faster. The speed is achieved by having 50G PAM4 SerDes, a monolithic 31 billion transistor chip using the 7nm process. The Tomahawk 4 has support for up to 256 ports of 100 GbE with the highest radix of 100 GbE solutions. There are a couple of new features like the feature of advanced load balancing mechanisms, Broadcom is opening up its switch API as open-source software with the introduction of Broadcom Open Network Switch APIs. With Broadcom allowing their API to be open source allows for altercations by programmers.

Broadcom has stated that the 25.6TBps performance is double the throughput of any other silicon/processors on the market currently. This switch also offers massive I/O density plus advanced in-band using four 1GHx Arm processors. This switch utilizes the "Single Switch Hop" feature, which, by using just one more giant switch with a vastly more powerful processor allows for up to a 60% reduction in the intra-cluster latency.

Broadcom did release a roadmap which shows how with this recent release of the 25.6 TBps switch, Broadcom is currently outpacing Moore's Law — showing that with each year, there is 40x Bandwidth Increase. Broadcom also offers efficient, scalable MMU and Leading-Edge process technology and IP; this switch also offers fantastic Physical Design Expertise.

With Intel's currently purchasing of the startup Barefoot Networks, whose 7nm process if now only capable of 12.8TBps and stopped the development of its Omni-Path fabric, launched its first 100GBps ethernet controller. This could lead to Intel trying to compete against Broadcom, but with how fast Broadcom can produce and create faster network switches, Intel seemingly is going to have a tough time standing up to this manufacturer.