Last week Breaking Benjamin's frontman Benjamin Burnley, literally destroyed a copy of Star Wars Battlefront when he was asked to talk positively about the game on social media. Now the singer has explained why the shooter from DICE "sucks". 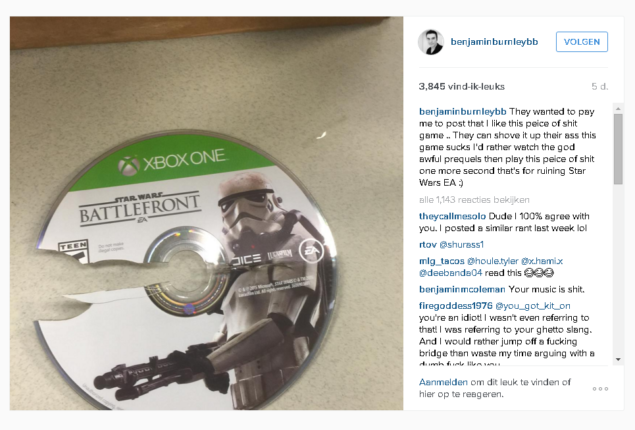 In an interview with radio station WCYY, the singer was asked why he destroyed his Battlefront copy. Burnley is a known Star Wars fan, but according to the singer he was asked by an EA representative to talk positively about the shooter on social media. According Burnley he would be happy to promote the game, if it was indeed a good game, which it isn't.

"For me to say that a Star Wars game sucks sh*t, it must really be a sh*tty game, and that it is", the singer said.

The singer continues by explaining why he thinks DICE's shooter is a sh*tty game.

"It f**king sucks. The gameplay sucks," he said. "All online games suck in their own kind of way, because you're relying on the Internet."

According the Breaking Benjamin frontman, the game just isn't fun. "Out of nowhere enemies spawn behind you in front of you", and "you get shot with one kill weapons that you don't have to earn". "All of sudden you die", the singer added.

"Who wants that?", Burnley asked the interviewer from WCYY.

Burnley didn't stop there though, as he further explained why he destroyed his copy of Battlefront. "There's no reward system, they're just hoping that you pick up". The hit detection in the game is horrible and the hero/villain gameplay sucks as well, according Burnley.

What are your thoughts on this 2.30 minute 'review' from Burnley?