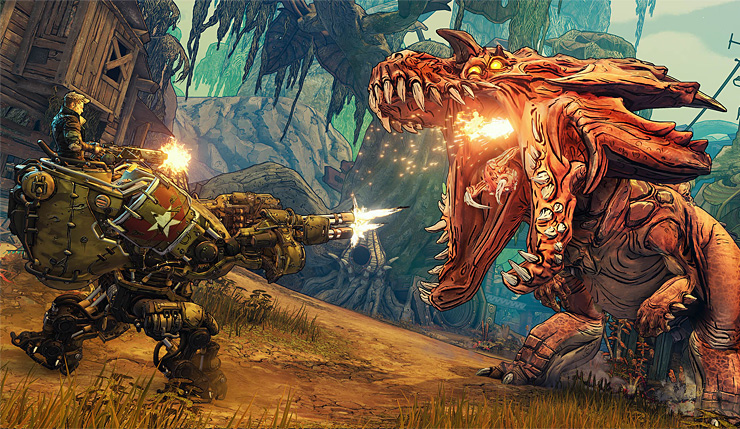 Borderlands 3 has landed on the Epic Games store and so far reception from long-time fans has been fairly positive and most critics that understand the jovial nature of the game tend to agree.  We haven't finished our game review yet so I can't link it yet, but we're here for the performance anyway. Borderlands 3 is powered by the Unreal 4 Engine and its lack of utilization of higher core counts shows that more than anything as you'll see shortly. On to the evaluation!

Testing Borderlands 3 was made a bit easier thanks to the built-in benchmark tool that is fairly representative of the actual gameplay performance while being able to keep results consistent between runs. While DirectX 12 is available in the game it is currently in a BETA state and I found its stability to be questionable at best, but capable of delivering slightly better performance when it wasn't crashing or stuttering, so because of that, we stuck to DirectX11 for our testing.

We used FrameView to capture the performance from the 105 second run of the benchmark while running at the Ultra preset.  Once we had the results from 3 runs, after discarding an initial burner run for loading purposes, we took the average of average frame rates as well as the 99th percentile results from the run.  I had been using 1% and .1% results but while working on an upcoming review, before starting this one, I had decided to move to a 99th percentile to represent the bottom end of the framerates for a simpler method of charting and reading for our readers.  For those uncertain of what the 99th percentile is, representing is easily explained as showing only 1 frame out of 100 is slower than this frame rate. Put another way, 99% of the frames will achieve at least this frame rate. The representation of the 99th percentile is much more consistent in my experience than the 1% and .1% lows, so this was ultimately done as a way to deliver better metrics to the audience. Below is the setting that is applied with the Ultra preset.

Borderlands 3 features Fidelity FX Sharpening through their partnership with AMD for this title, but the feature is available for everyone to use and isn't limited to Radeon cards. That said it's designed to sharpen the image, create a clearer final image and we've included a side by side comparison of it on and off.  This example really shows its benefit on the ground surface, but throughout the game so far it's a feature I would recommend you leave on as it does add a bit to the game itself that Radeon Image Sharpening and GeForce Freestyle Sharpening don't, but combining the two is even better.

Testing presets at 4K gives us a couple of quick metrics before diving into the game too deeply.  First off, it shows us how the game looks at various presets as well as how performance scales with those settings.  If there's one major takeaway from Borderlands 3 and it's preset options it's that you can see there's a difference, but the performance scales accordingly.  As we move from the somewhat bland, but high performing Low setting to Medium we see more assets begin to form that clear up the image, but we see a stark performance difference.  Moving from Medium to High has the highest impact on visuals and performance resulting in my recommendation of going with High preset and turning Volumetric Lighting down to Medium. I think you'll find performance at your GPU's desired resolution to be fairly good there.  Moving to Ultra and Badass changes become more nuanced, but do drag the performance down along the way making Borderlands 3 appear much more intense to run than it can be as a result.

This is the exact same idea as the 4K preset scaling just changed to using an RX 570 at 1080p, this will become a staple in these performance reviews going forward.

While this test won’t tell just how many cores and threads the game can and will use, it does show how the game performs as you move up in cores and threads available. These were tested at the 1080p settings that we tested the rest of the results while pairing the CPU with the RTX 2080 Ti Founders Edition.  While this does not take into account the cache difference you would see with Intel CPUs as you move through their offering stack it does give us a better idea of how the game benefits and behaves from more cores and threads.  While Borderlands 3 will crash out when trying to run with 2c/2t it doesn't benefit at all from anything past a 4c/4t CPU, so most people out there gaming are going to be in a good place, even those with a multi-threaded dual core should be able to get in on the action on this one and since I highly doubt they're crazy enough to be pairing that with an RTX 2080 Ti it should be smooth sailing.

About That Data Stream

Let me be the first to say that I can't stand DRM and especially DENUVO so do not take this as a defense for either one, but there was a mad dash to report that Borderlands 3 was consuming a CONSTANT 2MB/s upload and chewing through data.  This was based off a single tweet that people latched onto and simply parroted without checking.  I paid attention to it along with many others and simply did not see this occurance.  Also, 2MBp/s =/= 2 Megabytes per second, not sure why so many were equating bits to bytes but perhaps they'll figure it out.

One major note before going into the conclusion.  While testing the Radeon Vega and Navi based cards, because it didn't occur with others during my tests, upon the initial load into the game or the benchmark I was experiencing micro stutters that would go away after a few minutes or a quick reload.  I wanted to put that out there in case anyone was noticing something like this when they first start a game.  I noticed that when running the opening cutscene and into the game the first time it wasn't present so the cutscene likely handled the delay for it to stop, but upon exiting the game and loading back in it showed up.  Easy fix so I presume either a driver update or a game patch could sort this out easily.

The image below is only for illustration purposes only to show what that initial run could look like, this was a fresh load of the benchmark utility.

Borderlands 3 was a bit more intense to run than I had anticipated.  Being built off a familiar engine and the stylized graphics, while fitting for the series, didn't impress me for the performance that we were getting and with most cards the level of scaling should make up for that.  Seeing the lower mainstream cards, and even the Vega line and GTX 1070, under the 60FPS mark at 1080p means you'll need to tweak this one quite a bit to really get things smoothed out.  That said, the Medium preset is a pretty good place to start for those without enthusiast-level graphics cards to squeeze out the most performance.  I've been playing the game with an RTX 2080 and a Ryzen 5 3600X at 1440p and with the High preset and Volumetric Fog set to Medium I'm hovering around the 100 FPS mark which is much better than the 72 FPS that the Ultra preset will deliver.  If you were looking to pick up Borderlands 3 and wondering how the performance is, I hope this helped you get a clearer picture.  As a last note, we would love to hear your feedback on the 99th percentile usage, or would you rather I go back to 1% and .1% lows?