Borderlands 3 is set to be the series’ biggest game yet, with the action expanding to several new planets, which means more lore, more characters, and a lot more one-liners. Borderlands’ writing has always been key to its identity and based on my recent hands-on session with Borderlands 3, it seems Gearbox is putting a lot of effort into making sure the latest entry in the series feels right. Borderlands 3 brings back plenty of favorite characters and its tone and humor is very familiar, but will the game bring enough fresh and exciting stuff to the table? It remains to be seen, but some of the new characters are promising and I’m interested to see what kind of weirdness might be lurking on some of the game's planets.

Borderlands 3’s head writers certainly seem to know what makes the series tick. Following my hands-on time I got the opportunity to chat with Gearbox’s Danny Homan and Sam Winkler about the series’ trademark humor, their favorite new characters, working with Ice-T, the game’s upcoming DLC, and a whole lot more. It was a fun chat, so do check it out below… 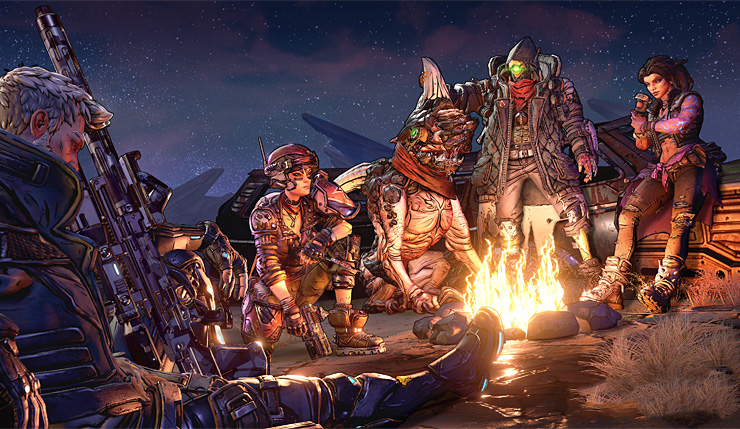 What has it been like being married to Borderlands 3 the last few years? Was there any feeling of pressure given the series’ reputation and large fan base?

Danny Homan: I mean, it's been super exciting. This is an awesome universe to play around in. Sam and I have both been on the project for about three years now and we were big Borderlands fans before we joined Gearbox. The opportunity you have for both comedy and creating new characters in this universe is kind of unparalleled, so it been a lot of fun.

Sam Winkler: Yeah, and being able to take returning characters and make those voices believably changed has been a really fun challenge. Anybody we're bringing back in this game, they have a new story and they're demonstrably different than how we last saw them. It's been an honor to usher Borderlands through this new era.

What's the secret to nailing that Borderlands-brand humor? In the past a lot of it has drawn on memes and very of-the-moment stuff. How do you keep up with that when you're toiling away for years on a game? Have you had to scrap a lot of jokes?

SW: We don't have the thumb on the pulse of the meme world anymore. We try to make our jokes based on, first and foremost, what makes us laugh, and secondly, the characters, their personalities, and how they react to crazy situations. I think the best humor comes from characters you understand.

DH: The DNA of Borderlands humor is this dark galaxy that's been overrun by corporations. They are the governments, they're all arms dealers, and they do whatever the hell they want to. Anybody who's not a part of a corporation is just trying to survive and do the best they can. It's a grounded humor in a way.

The demo I played seemed to mostly focus on returning characters like Lilith and Vaughn. Will new characters also get a chance to shine? Who are some of your favorite new faces?

DH: There are some new characters that you haven't seen yet that are particular favorites of ours. We're really excited to see the reaction to Lorelai...

DH: Lorelai is the first person you meet on Promethea, which is a new planet, and her thing is "This city was doing just fine a little while ago and then this corporate war came to it" and [this woman who was a] barista turned into a guerilla fighter. That's kind of how the Borderlands universe works unfortunately. You have to do what it takes to survive.

SW: What do you think of Balex?

He could grow on me.

SW: Writing for Balex was a real treat and I hope he sticks with the fans. Of course, he's voiced by Ice-T, so that helps. He's wild to work with.

The voice was familiar, but it took me a minute to put together who it was. I assume you've slipped some Law & Order jokes in?

Will our new Vault Hunters also be getting a bigger piece of the spotlight?

SW: The player-character Vault Hunters have a lot more involvement in the storyline now in that they speak a lot more and express their opinions on things. It's a fairly linear story without a lot of branching points, but they will have opinions. Amara might see someone and be "Ugh, this guy" whereas Zane will be "This guy! I love this guy!" Player experience is going to change depending on the Vault Hunter.

Speaking of the Vault Hunters, I really enjoyed giving FL4K a spin today. It feels like they’re designed for more solitary types who don't want to play co-op, but still want a partner. Was that the intention?

DH: It's just such a classic relationship of a Beastmaster and their pet. I love FL4K because I just enjoy cycling from pet to pet and building new relationship. "No, I actually want a monkey friend now."

I got pretty attached to my Spiderant buddy. He murdered a lot of people for me.

DH: As any good pet should.

Being able to visit multiple planets is a big addition to Borderlands 3. How many will there be in total?

Right. Could you share a few details about any of the planets we've yet to see?

DH: There are some pretty cool, distinct planets we haven't seen yet, one of which kind of plays into a major franchise character's backstory in a really interesting way. That will be a cool one for fans of Borderlands 2. It also looks really different than the other planets. It's got this whole unique culture.

SW: There's nobody more frustrated with repetitive fetch quests than the mission designers and they're constantly one-upping themselves as to what can be accomplished in the looter shooter genre.

DH: There are missions in Borderlands 3 that are really weird takes on "What is a mission?"

SW: Not all the game's humor starts as something we write on the page. Sometimes mission designers will come pitch "How would this craziness fit in the universe? I want to make this happen." And we're like, "Yes, we're going to help you with that."

It's been seven years since Borderlands 2 and you've made the jump to Unreal Engine 4. How has the advance in tech changed the kind of stories and missions you can pull off?

SW: I mean, the biggest technical innovation is Sanctuary III. We've got a spaceship now. We're a proper space opera now, going to different planets. It literally opens up the entire universe.

On that subject, will players be able to make Sanctuary their own? How will the ship expand and change as you play?

SW: First of all, you can customize your player quarters with trophies. If you have a really cool gun you don't want to let go of you can put it up on the wall. As you play through the game, you will meet new characters and some of them will join you on Sanctuary. That will unlock new side missions and collectibles to find. It was important that it feel like a living, breathing, inhabited space. I think our level design and art team did an incredible job on that. You walk through and you see messy bunks and posters peeling off the walls. You really get a sense that people live and work here.

Gearbox is taking a fairly traditional approach to post-launch support with a series of DLC expansion packs. What can we expect from those?

DH: We're working on four DLC packs, which will be crazy and varied. In Borderlands 2 we had a pirate adventure and a D&D fantasy thing. For Borderlands 3 we're continuing that tradition with some interesting, bizarre genre takes on DLC.

So, will the DLC just remix stuff from the core game or are we getting all-new content?

DH: No, it will be new locations. New places, new characters, returning old characters you didn't meet or see enough of in the main game.

Borderlands 3 recently went gold. Is Gearbox still working on polishing the game before launch? While I didn't encounter a lot of glitches, there were some performance hiccups.

SW: I mean, we're always improving it. I'm not sure when the build you were playing was branched off, but I've already seen improvements to certain things in just the last week.

I look forward to trying out the full game. Thanks for answering my questions, guys!

Borderlands 3 hits PC, Xbox One, and PS4 on September 13. The game will also be available on Google Stadia when the service launches.