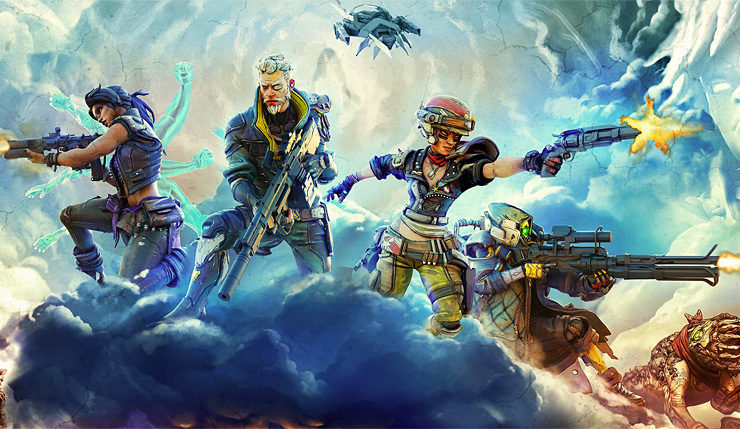 Borderlands isn’t well suited to short demos held in noisy convention halls, which is why I never wrote about my time with Borderlands 3 at E3 2019. Frankly, the game didn’t blow me away then, but I wasn’t testing it under optimal conditions -- namely, a lazy Sunday play session with a good friend or spouse on the other side of the couch. I haven’t had an opportunity to do that just yet, but I did recently get a chance to play around five hours of Borderlands 3 at Take-Two Interactive’s calm, immaculate Manhattan headquarters and now feel like I can fairly share my thoughts.

The Borderlands 3 demo was divided into two sessions – a full playthrough of the game’s introductory missions on Pandora and a mission set on the new steamy jungle planet of Eden-6. In both cases, I played as FL4K, Borderlands 3’s carnage-hungry robot Beastmaster, although for the Eden-6 mission I was given the keys to a much better-equipped high-level version of the character. For both sessions, I initially played solo (the intro section could only be played solo), although I did replay a portion of the Eden-6 mission with a co-op partner, which worked just as well always. 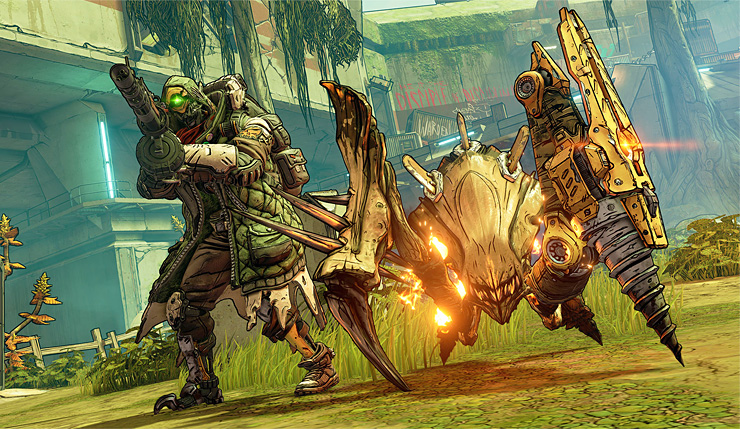 FL4K can choose between three different alien buddies who will scamper ahead and help you take care of enemies. Your pets don’t do a huge amount of damage, but they will draw enemy aggro, allowing you to flank unsuspecting baddies. I opted for the Spiderant, which confers some health-regeneration bonuses, but you can also go for a fuzzy Jabber or scaly Skag. I’ll admit, I got kinda attached to my charmingly-creepy Spiderant buddy and FL4K’s bone-dry robot humor grew on me after a while. FL4K’s a nice reminder not all robots are Claptrap-like nuisances. It feels like the character has been designed for loners who still want a little backup when playing solo, which is smart. During my second Eden-6 run, I also briefly tried out Moze, who can jump into a powerful mech for a limited amount of time. Moze feels a touch gimmicky compared to FL4K, but maybe I just didn’t get enough time with her.

Borderland 3’s character building options are definitely more complex than in the past – in addition to the pets, FL4K has a three different Action Skills to choose from, which can be augmented with different effects, and over 35 different Passive Abilities to be unlocked and upgraded. Borderlands 3’s Vault Hunters are clearly the most varied lineup Gearbox has dreamed up to date, allowing for all manner of play styles. By the way, you can check out interactive skill trees for all the new characters, right here. 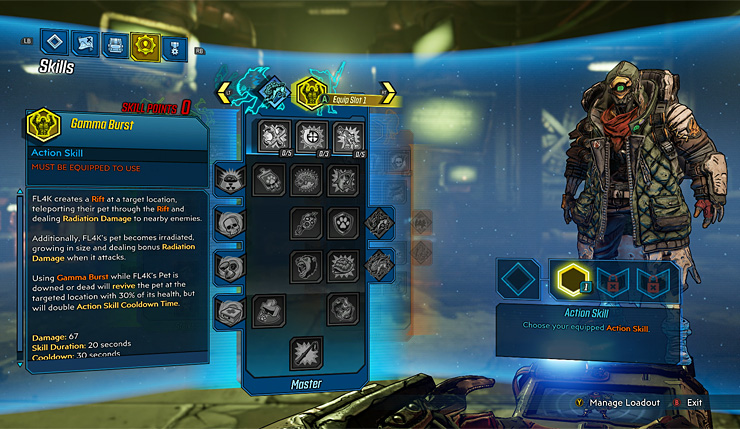 While the new Vault Hunters stand out, Borderlands 3’s action is more of less par for the course. Characters are a bit more agile – you can slide and auto-mantle onto ledges this time around – but, otherwise, this is Borderlands as you know it. Unleashing Action Skills or ripping into enemies with that Epic shotgun you lucked into finding is satisfying, but gunplay generally doesn’t have of ton of punch. I also have to admit, the search for ever-better loot has never been my thing. As long as my current guns are getting the job done, I’ll keep using them until I stumble on something better. Managing your weapon collection is also more of a hassle than it should thanks to somewhat slightly clumsy menus and an irritatingly-limited inventory. Most weapons now have secondary fire modes, which is a neat addition I suppose, but ultimately, the weapons I was picking up didn’t feel radically new or different.

Borderlands 3’s level design also sticks pretty closely to the established blueprint. This is particularly true of the intro missions, which take place on a familiar-looking chunk of Pandora. Sand, rocks, caves, you know the drill. Eden-6 provided some visual variety, but the murky world ain’t exactly a dazzling vacation destination. Borderlands 3 certainly looks nice, but it doesn’t feel like a huge step forward compared to its predecessor. I’m sure Gearbox’s art department want to murder me for saying that, as I’m certain there’s plenty of new tech under the hood, and, admittedly, there were a ton of new effects flying around. That said, the overall feeling when playing on a typical 4K computer monitor just wasn’t that different compared to Borderlands 2. Maybe there’s only so much you can do with Borderlands’ trademark cel-shaded visual style. I would also be remiss if it didn’t mention the game’s relatively frequent framerate dips, which were somewhat worrying considering I was told I was playing on near-final code. 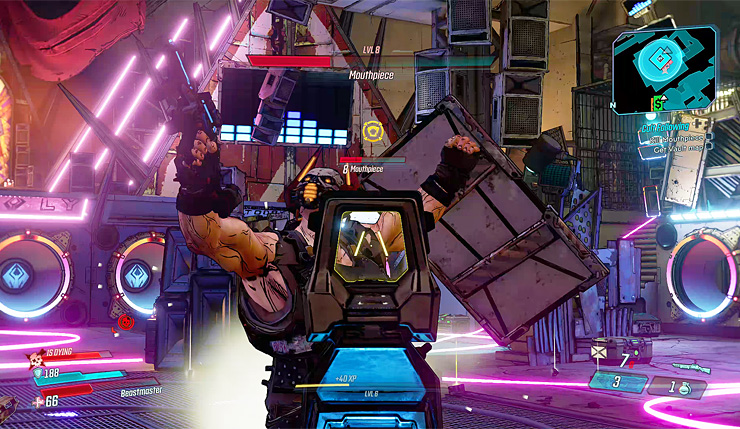 Most of the missions I tackled were of the typical “go to place, kill enemies, pick up MacGuffin” variety, although there was an amusingly twisted one that involved recklessly driving over enemies so I could harvest them for “biofuel,” and another side mission that took place inside the mind of a head trapped in a jar. The Gearbox guys promised me the game’s designers have come up with some crazy stuff, so I’m hopeful Borderlands 3’s missions will offer a good amount of variety.

One thing I’m definitely looking forward to are Borderlands 3’s bosses, which are set to be a bigger focus this time around. In interviews, Gearbox has said there’s an “absurd” number of bosses in the game, and based on my experience, they’re going to be a lot more intense than before. They almost feel like they’ve been ripped from a Platinum Games title. The second big bad I fought during my demo was more frantic than some of Borderlands 2’s final bosses. Really, “more frantic” is a good way to describe the Borderlands 3 experience in general. Everything's a little bit faster, and there’s just more going on. 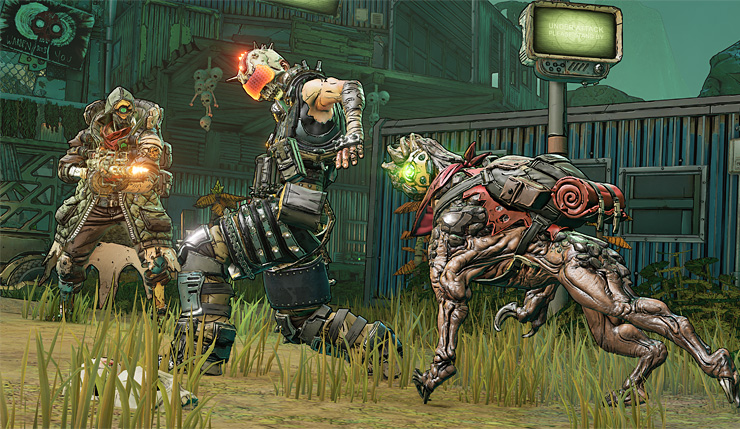 Just don’t expect too much extra craziness when it comes to the game’s writing. If you’re hoping for a game as funny as Borderlands 2 (already a bit of an acquired taste, I know) you might be disappointed, although the game did pry a few chuckles out of me. While I’m holding out for some twists, the game seems to have a pretty simple “bad guys do bad things, heroes react” plot, with new villains the Calypso Twins not leaving much of an impression. Maybe Borderlands 3’s new characters will grow on me – Balex, a smart-mouthed AI in a freaky stuffed animal body voiced by none other than Ice-T himself seems like a promising addition. Here’s hoping the new faces get to shine, as the game’s opening hours mostly focus on old favorites like Lilith, Ellie, and Tales from the Borderlands’ Vaughn.

Borderlands 3 serves up some unique, fun-to-play new Vault Hunters, with the robot Beastmaster FL4K being a particular standout, but nearly everything else about the game – visuals, level design, sense of humor -- feels distinctly familiar. That isn’t necessarily a bad thing, as there plenty of folks who just want more Borderlands. This is clearly a well-crafted, polished game, which promises to deliver a ton of content, but some of the excitement and anarchic spirit of the earlier Borderlands games seems to have worn off. Of course, I’ve only played five hours of the game. Perhaps I’ll find that spark hiding on one of the planets I haven’t visited yet. Dedicated fans are guaranteed to get plenty of what they want from Borderlands 3, but the series’ Siren song may not call as loudly to casual fans this time around.

Borderlands 3 hits PC, Xbox One, and PS4 on September 13. The game will also be available on Google Stadia when the service launches. Oh, and tune in tomorrow for an exclusive Borderlands 3 interview!