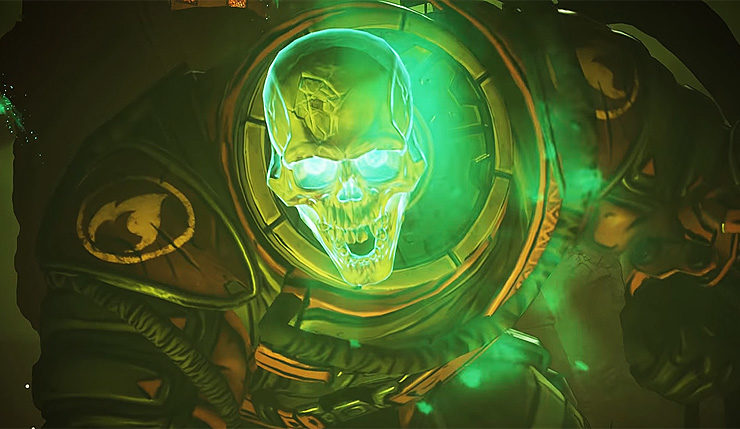 Halloween is almost upon us, and of course, Borderlands 3 is getting in on the spooky fun. The Bloody Harvest event adds a new area, Hell...er, no, Heck, which is home to your typical Halloween-ey enemies and a challenging boss, Captain Haunt. Bloody Harvest will also introduce a variety of new missions, cosmetics, and Haunted enemies scattered amongst the planets of Borderlands 3. Definitely sounds a lot more substantial than the current Borderlands 3 Anniversary event, which has mostly focused on delivering new loot, without really adding much to the core experience. Check out a trailer for Bloody Harvest, below.

Here’s a bit more detail on how Bloody Harvest will work:

In order to reach Heck, the spooky setting for Borderlands 3's Bloody Harvest, you must collect a certain amount of Hecktoplasm, an item that drops from slain Haunted enemies. You'll encounter Haunted enemies all over the galaxy during Bloody Harvest (you'll know them by their ghostly green glow.) Once you've collected enough Hecktoplasm, Maurice will open a portal to Heck aboard Sanctuary III that will transport you to the creepy domain of Captain Haunt and his undead minions.

Once you've managed to stop shaking in your boots at the sheer spookiness of Heck, you'll have to fight your way through an undead army of Maliwan soldiers who are rising from their graves with ambitions of revenge. You'll also encounter freaky fauna including flying, fire-breathing Rakk-o'-Lanterns and wretched Ratch that've gorged themselves on blood. Deep within the depths of Heck lies Captain Haunt, the bony final boss of Bloody Harvest.

And here’s how you can earn all the juicy new loot and cosmetics:

Your enemies in Heck have a chance to drop gear that will only be available during Bloody Harvest, including Fearmonger, a new Legendary shotgun that packs a supernatural punch. You might also find Anointed weapons that play off the new Terror mechanic introduced in Bloody Harvest. Haunted enemies can inflict the Terror debuff, which will affect your aim and partially cloud your vision -- but with these new Anointed effects, you can turn Terror into a beneficial boost of power.

There's also a set of seasonal cosmetic items which won't drop in Heck, but are exclusive to the Bloody Harvest event. During the event, you have the chance to earn skins for each of the Vault Hunters (which also apply to Moze's mech and Fl4K’s pets), a seasonal ECHO Device Skin, a shrunken head Weapon Trinket, and finally a ghostly Global Weapon Skin. To unlock these items, you'll need to complete a new set of Challenges that are exclusive to Bloody Harvest.

Bloody Harvest and it’s associated loot is free for all Borderlands 3 players. Borderlands 3 also has a $50 season pass, which includes four story updates.

Borderlands 3 is available on PC, Xbox One, and PS4. The Bloody Harvest event kicks off on October 24 and runs until December 5.