Some more Bloodborne screenshots have been made available by PlayStationTrophies forum member rmchiva925, focusing mostly on weapon and armor/outfits. 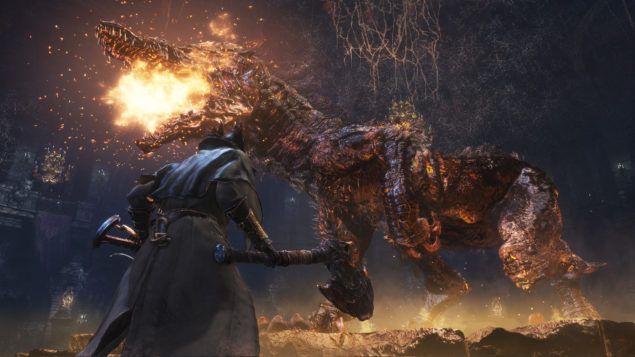 The images below are spoiler free but they do reveal some weapons and armor that has not been shown before, so if you prefer discovering them yourself you might choose to avoid viewing them.

Some information regarding classes, stats and weapons in Bloodborne can be found below:

Classes in Bloodborne is a thing of the past, at least in terms of "Bandit, Wanderer, Knight, etc", like we know them from the earlier games. The character creator does on the other hand have an 'Origin' section, where you choose an origin with a short back-story and starting stats.

Stats are player attributes in Bloodborne. When you level up in Bloodborne you increase an attribute by one point. Attributes like Strength and Skill are represented by numerical values and determine what armors and weapons can be equipped, while attributes like Arcane and Bloodtingue govern ???. Attributes also give your characters increased stats, e.g. Vitality increases your hit points and Endurance improves your Stamina.

Your character's current level, as determined by your expenditure of attribute points.

Blood Echoes are the game's currency, and is used to trade with Messengers. You can buy and sell items. Obtained by killing enemies.

The Strength stat governs heavy physical weapon ATK. Determines whether or not you can use certain equipment.

The Skill stat governs more nuanced physical weapon ATK. Determines whether or not you can use certain equipment.

The Bloodtinge stat governs power of weapons that use Quicksilver Bullets. Determines whether or not you can use certain equipment.

The Arcane stat governs power of Arcane ATK. Determines whether or not you can use certain equipment.

Weapons in Bloodborne will be a very strategic and important choice for the player. The player will be encouraged to discover and deeply learn a Weapons that suit their style of play and preference, with subtle parameters affecting the Weapon's performance in combat. A player's character will be able to dedicate themselves to mastering one weapon, and expect to perform well regardless of the choice. The game hopes to create a bond between the player and their chosen weapon.‍‍‍You may equip two weapons in each hand and rotate between them. Trick Weapons will primarily be held in the right hand and Firearms will be held in the left. Trick Weapons have a regular and transformed mode which varies greatly depending on the weapon. Firearms serve different roles. Some fire high damaging single-target shells and others fire a spread of bullets that stun enemies in the area.Weapon upgrades are done at the Workshop in the Dream Refuge, although not much is known about upgrading at this point.Notes:

Some tweets to get us in the mood:

Only 3 weeks to go until #Bloodborne unleashes on #PS4. Pre-order now - http://t.co/sUA1QJDMLY pic.twitter.com/BgRsdeJh0M

With my good friend Cleric Beast at the "Gone Gold" event. #Bloodborne pic.twitter.com/kBNileJyHY

Bloodborne is releasing exclusively for the PlayStation 4 platform on March 24th. We will bring you any new information prior to its release as soon as it becomes available. You can read more on Blackborne in our previous coverage, here and here.