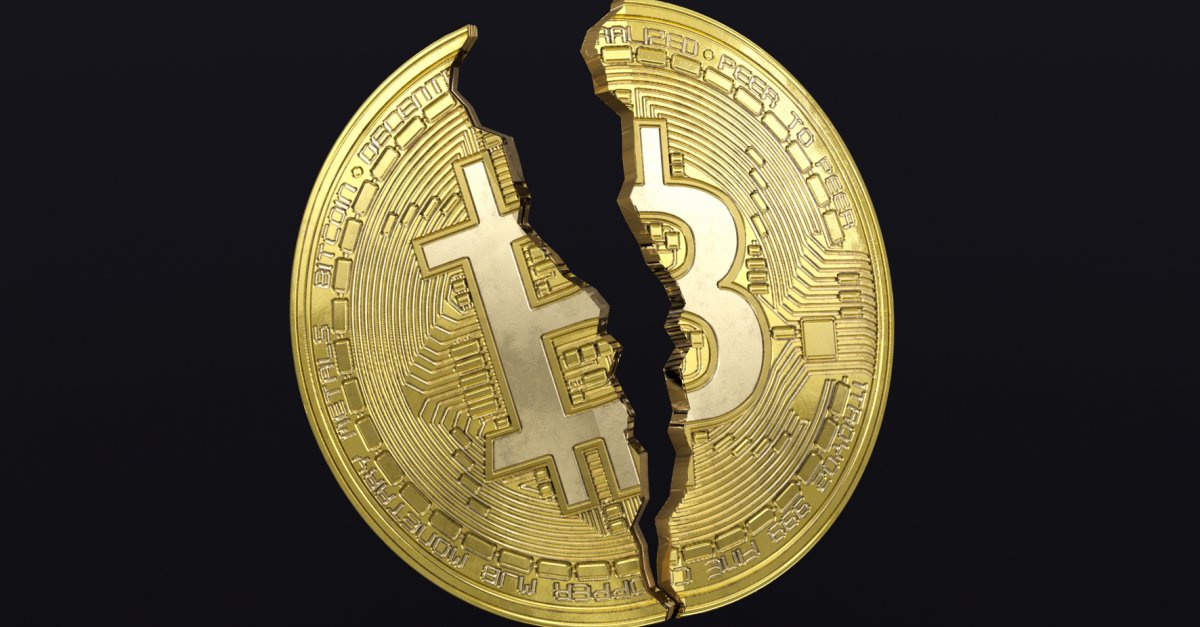 Ugly days beget ugly days. With Bitcoin approaching very robust support levels, bulls ordinarily would have been salivating at the prospect of rip-roaring gains ahead. Alas, such is the density of gloom pervading throughout the financial world that a seminal shift in the market’s psychology appears far too distant, lodged somewhere in the verdant valleys of investors’ collective psyche.

We have been hammering on the root causes behind the malaise that is currently affecting growth-focused, high-beta US equities along with Bitcoin and the rest of the crypto sphere. To avoid sounding like a broken cuckoo clock, we would eschew listing all of those reasons here. Instead, interested readers can head to this link to seek additional context.

With Bitcoin tumbling to the $20,000 price handle today, the world’s largest cryptocurrency has finally found support at a level that has held true every single time in the past. Let’s elaborate.

Rekt Capital recently identified the 200-week moving average as the critical support level that has reversed every single major downturn in Bitcoin since its inception.

Historically, #BTC tends to bottom at or below the 200-MA (orange)

Wicks below it are the point of peak opportunity

The chart below illustrates Bitcoin’s 200-day moving average as well as the cryptocurrency’s all-time high recorded back in 2018 – this level is expected to act as a support in the ongoing bottoming-out process. 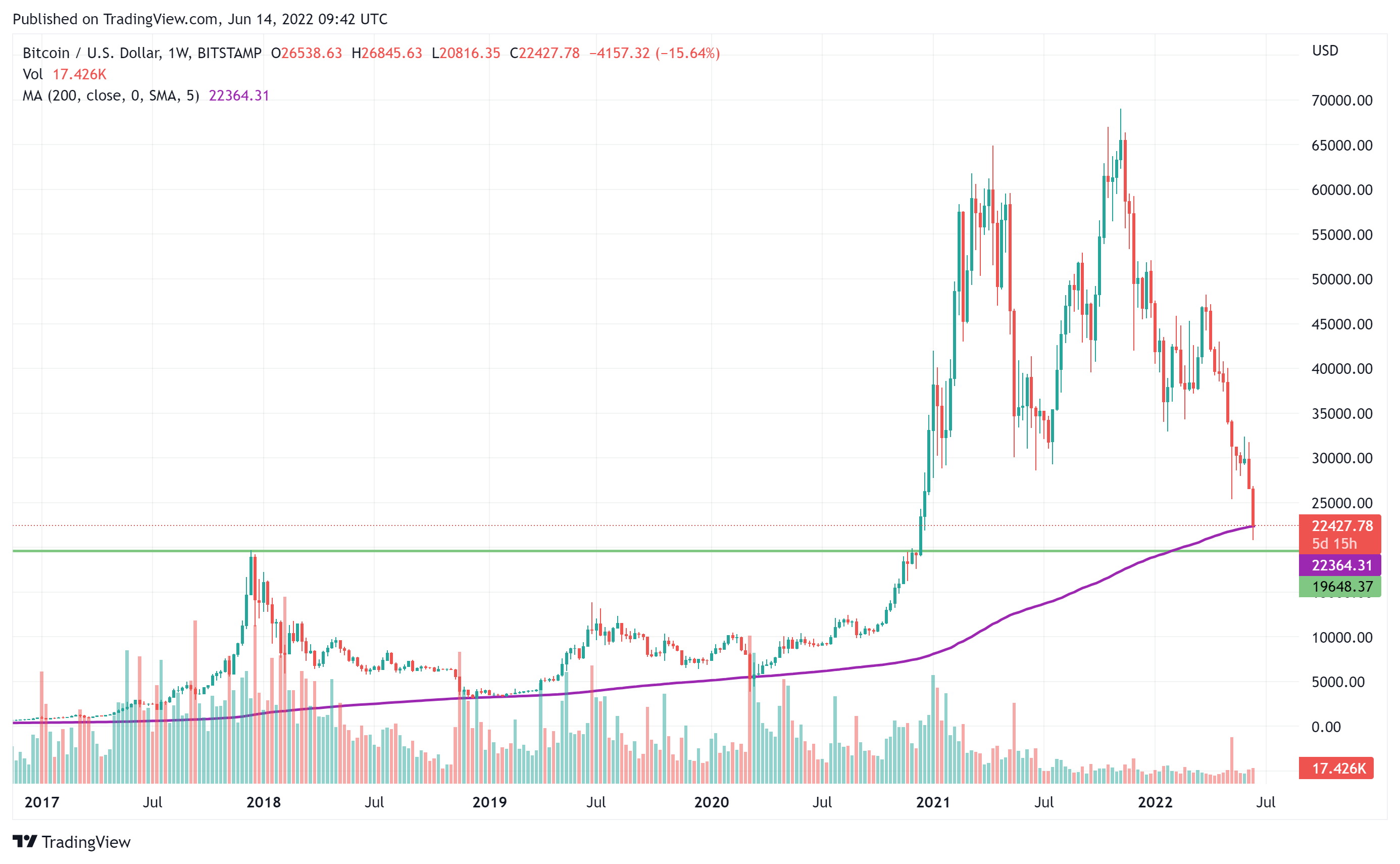 In another sign that we are nearing capitulation, CNBC recently identified that Bitcoin usually plummets around 80 percent in its bearish phase relative to the preceding all-time high. Based on BTC’s all-time high of around $69,000 in November 2021, we can expect the current bearish phase to terminate at around $14,000 to $15,000, assuming a correction of around 80 percent.

To summarize, Bitcoin is at or very near a firm capitulation level, based on the following developments:

Nonetheless, we do not believe that investors should expect rip-roaring gains in Bitcoin or the rest of the crypto sphere anytime soon. First, as explained by Rekt Capital, Bitcoin typically forms a double-bottom before transitioning to a full-fledged bullish mode.

Over the next two years or so, $BTC will form its second and final Macro Bottom to complete the Macro Double Bottom formation that recurs across cycles#Crypto #Bitcoin pic.twitter.com/qC3CDzmGa4

Second, the onslaught of upcoming high-profile margin calls is likely to muddy the proverbial waters around Bitcoin, with unorderly liquidation events further aggravating the already atrocious sentiment. This means that the entire crypto sphere is not out of the woods yet.

The entire crypto sphere usually follows the diktats of Bitcoin. It is for this reason that we accord the world’s premier cryptocurrency so much importance. While we’ve explained the thesis behind an eventual phase transition in Bitcoin in the preceding section, that thesis remains under threat from a possible cascade of margin calls. Let’s delve deeper.

First, as we mentioned in a dedicated post yesterday, MicroStrategy had announced back in May that if the price of Bitcoin were to fall below $21,000, it would face a margin call on a $205 million Bitcoin-collateralized loan from Silvergate Bank. Well, a few hours back, the price of the cryptocurrency did tumble below that critical threshold, leading to rampant speculation about whether the margin call has now been triggered or not.

While MicroStrategy has a sufficient stash of unencumbered Bitcoin to satisfy this margin call, the hit to the cryptocurrency’s sentiment is likely to be brutal.

However, there is more pain in store on this count for Bitcoin bulls. We explained yesterday that the Lido-staked Ethereum (stETH), a Decentralized Finance (DeFi) variant of Ethereum that is issued against staked Ethereum coins, can be redeemed for Ethereum on a 1:1 basis but only after the Ethereum 2 transition takes place following the merge event in late 2022 or early 2023. Crucially, stETH is widely used as a collateral in the DeFi space to underwrite loans. However, last week, stETH began to de-peg from its theoretically convergent price with Ethereum as Alameda Capital dumped the entirety of its position in this derivative product. The de-peg, which has still not been restored, resulted in severe liquidity shortfalls for crypto lending firms such as Celsius (CEL).

As a refresher, Celsius markets itself as a crypto lending platform based on an open ledger technology – read as blockchain. In order to join the platform and access the platform’s customer wallets, users are required to buy the blockchain’s native token – CEL.

With Celsius holding large amounts of stETH, it faced aggravating liquidity issues as investors started redeeming large quantities of stETH for Ethereum when the 1:1 theoretical peg was broken last week. As the market to buy Ethereum using stETH is not nearly as large, Celsius was compelled to halt all withdrawals.

But the story does not end here. Similar to stETH, Wrapped Bitcoin on Ethereum (wBTC) is a derivative product that allows Bitcoin holders access to the Ethereum DeFi ecosystem. Basically, it is an ERC-20 token that is fully backed by Bitcoin and managed by the wBTC Decentralized Autonomous Organization (DAO). wBTC can be exchanged with Bitcoin at a 1:1 price ratio. 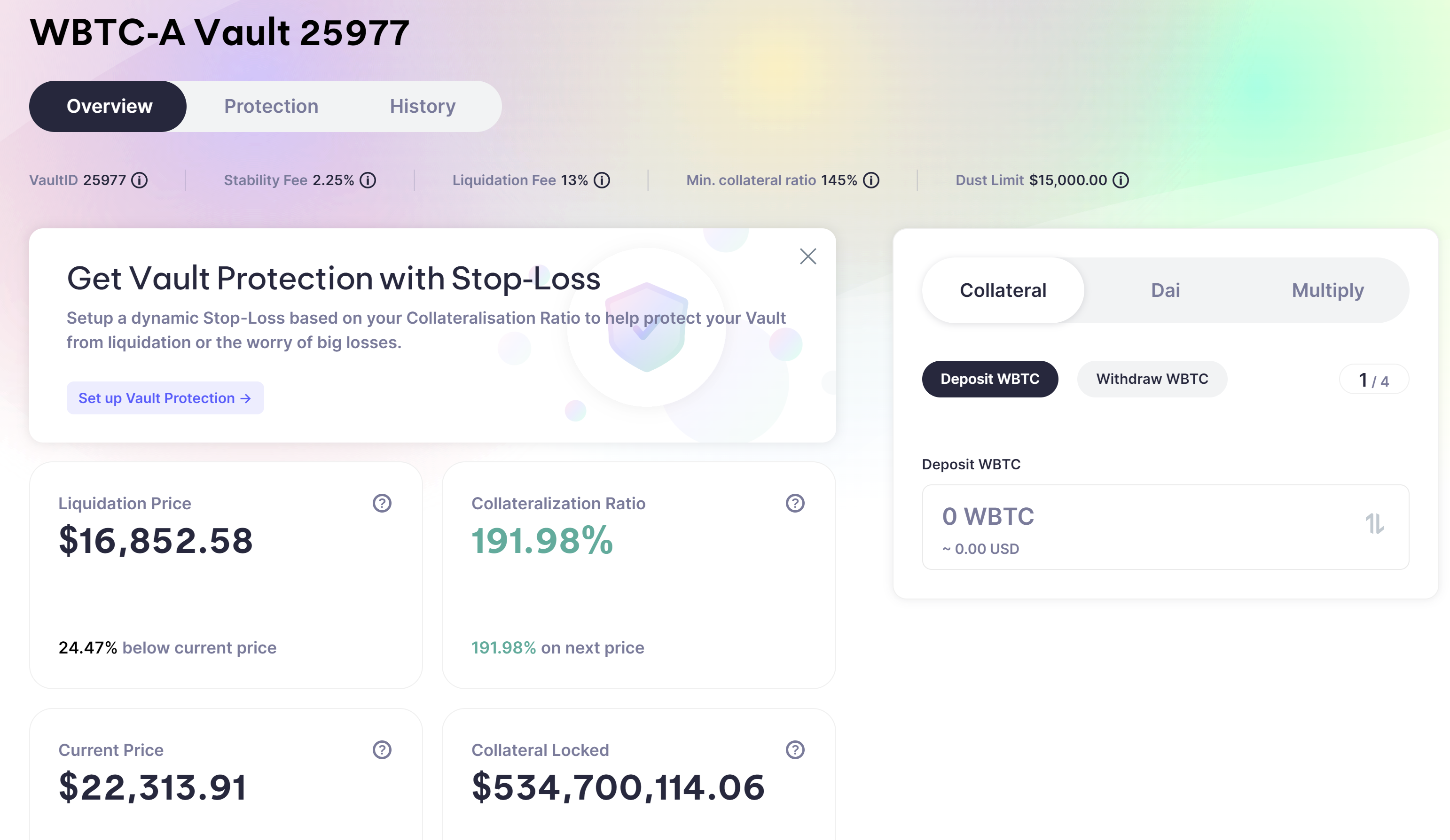 Critically, Celsius holds around 17,900 wBTC in a dedicated vault. It faces a margin call if the price of Bitcoin plummets below $16,852 (as per the current tabulation). Bear in mind that yesterday, this margin call trigger was at the $20,272 price level. But Celsius is currently adding more collateral to reduce the risk of a disorderly margin call.

This brings us to the crux of the matter. Our readers would know that the infamous collapse of Terra’s LUNA coin occurred as a result of a concerted attack by a few actors who generated phenomenal gains when the platform’s stablecoin TerraUSD imploded. A similar activity appears to be taking place against Celsius right now.

To wit, the open interest on the CEL perpetual futures contract on FTX was about 1.5 million a week ago. Currently, it is near 30 million. Moreover, as evidenced by the negative funding rate on the chart above, most of the positions seem to be betting against CEL. As a refresher, a negative funding rate indicates dominance of short positions. This means that a lot of sophisticated traders are betting against Celsius and hoping for a disorderly margin call.

Celsius is rumored to have taken a huge hit in the Terra saga. With its liquidity position seemingly compromised, the bets against the platform are rising. However, if the margin call does occur, it will not only severely curtail the wBTC market but also damage the frail sentiment around Bitcoin, leading to further losses.

Update: MicroStrategy's Michael Saylor Does Not Expect a Margin Call

JUST IN: Michael Saylor doesn’t expect a margin call on their #Bitcoin investment, says the company has additional collateral.

It seems MicroStrategy has posted sufficient collateral to avoid a margin call on its $205 million Bitcoin-collaterized loan. The stock is up around 5 percent at the time of writing. Year to date, MicroStrategy shares are still down over 70 percent.