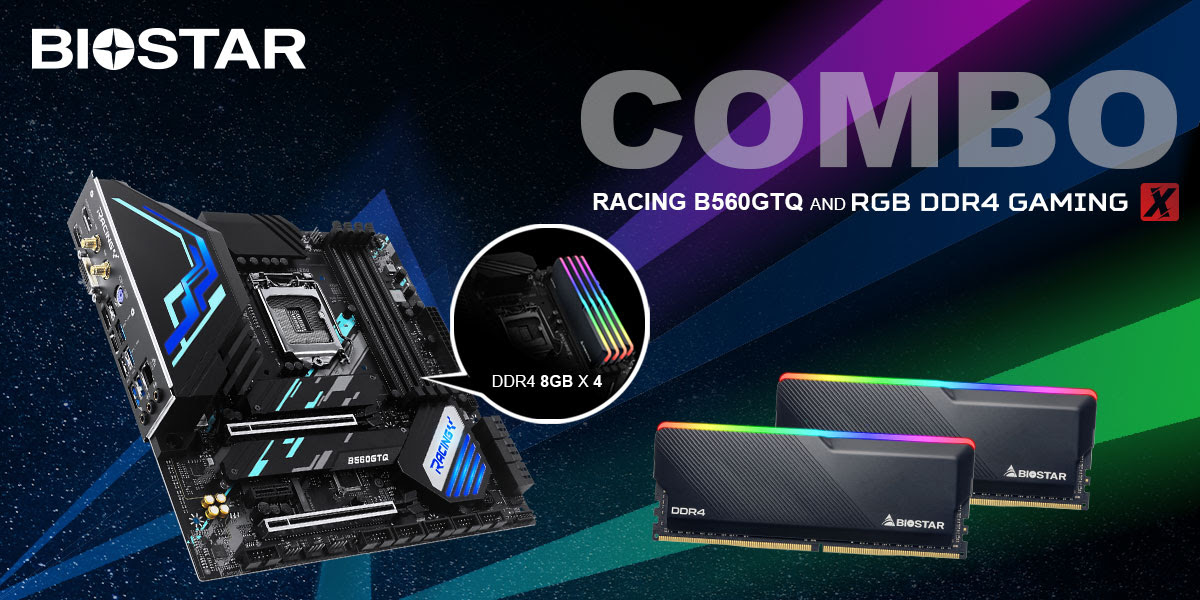 BIOSTAR has released the RACING B560GTQ Motherboard series along with the RGB DDR4 Gaming RAM which comes in a singular bundle for $300 US.

The BIOSTAR Racing Motherboard (model B560GTQ) is modeled after the Intel B560 single chip architecture. BIOSTAR'S Racing Motherboard is able to run the latest Intel 11th generation processors, included with PCIe 4.0 and PCIe M.2 4.0 (64Gb/s) support. It is capable of supporting Intel's Optane Technology. Wi-Fi 6 module is supported, but is not available on the motherboard and will need to be purchased separately. BIOSTAR is marketing the motherboard for content creation and casual gaming. The sleek black, blue and white motherboard promises high efficiency and workflow for many hours of use.

The BIOSTAR RGB DDR4 GAMING X RAM kit is sixteen gigabytes (8GBx2) with a minimum clock speed of 3600MHz. The RAM Kit supports dual channels, high-quality ICs, and is available in either eight and sixteen-gigabyte models. The voltage of the RGBs are both a single 12V LED header and two subsequent ARGB 5V LED headers. It is compatible with both Intel and AMD motherboards. The RAM Kit has a separate RGB software control, allowing users to fully customize the LEDs as needed for any situation.

You can get the BIOSTAR Racing B560GTQ Motherboard and the RGB DDR4 GAMING X RAM Kit for $150 for each—a total of $300 for both, and is now available worldwide and through select internet retailers. Check out BIOSTAR's website for details of where to be able to purchase yours today.