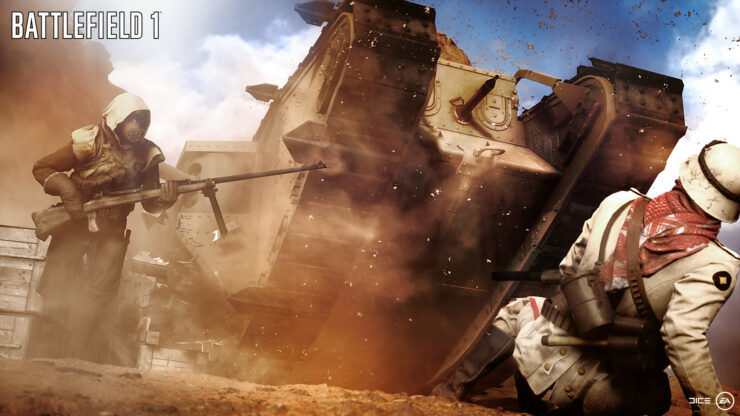 Battlefield 1, or BF1 for short as it's going to be called by many fans from now on, certainly had an enthusiastic response to its reveal. The YouTube trailer is now approaching 30 million views, almost 10 million more than competitor Call of Duty: Infinite Warfare.

However, that just means gamers are even more eager to learn more details on BF1. Luckily, Gamespot recently posted a thorough interview with DICE's Design Director Lars Gustavsson and there are some juicy tidbits to highlight.

Fans of the destruction first introduced with the Bad Company spin-offs will be happy to know that, after being toned down in games like Battlefield 4 and more recently Star Wars Battlefront, it seems to be back with a vengeance.

We're still holding back some elements of what we're doing, but as a whole, we have tried really hard to ensure that this is a really destructive environment. But as you heard during our presentation, one player controlled the dreadnought [Royal Navy battleship] and was levelling entire levels. A battleship can demolish entire shorelines.

I really hope players will appreciate it.

Another aspect highlighted by Gustavsson is that World War I was far from being confined to trenches, which is something that the developers want to surface via gameplay.

We're trying so hard to treat it respectfully. We want to depict the era, but with the purpose of building fun gameplay with variation. In the end, it's entertainment, we're not trying to make a statement.

We do want to surface the fact that there is more to the war than trenches. It's something that dawned on us, and I think it's going to be interesting for players as well as they get to play it. Trench Warfare was just a small part of it. The fights in the deserts, the fights up in the mountains of Italy--there were so many things that I, at least, hadn't heard about.

Hopefully it will broaden their horizons with what took place.

Battlefield 1 will launch on October 21, though you'll be able to play from October 18 with an Early Enlister edition. Expect to see gameplay footage at EA's E3 Showcase, scheduled for June 12th at 1PM PT/9PM BST.