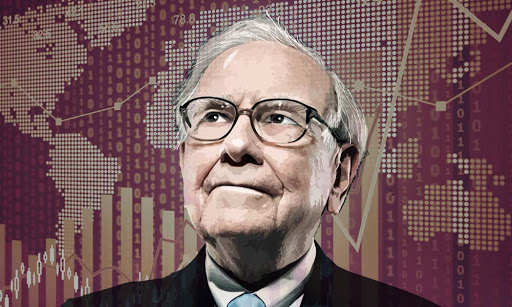 The CEO of Berkshire Hathaway Warren Buffett, also known as the oracle of Omaha, released his annual letter to shareholders today. While the letter contains numerous insights, the biggest takeaway for investors is Buffett’s belief that the current stock market valuations are ‘sky-high’.

Berkshire Hathaway, arguably one of the most famous asset management company in the world, possessed a whopping $112 billion in U.S T-Bills and other cash equivalents, as of the end of 2019. It also held other fixed income securities worth around $20 billion. Investors were looking forward to Buffett’s annual letter in order to gain insight as to how Buffett was planning to invest this gargantuan pool. Those hopes, however, stand dashed as the billionaire wrote in his letter:

“In the years ahead, we hope to move much of our excess liquidity into businesses that Berkshire will permanently own. The immediate prospects for that, however, are not good: Prices are sky-high for businesses possessing decent long-term prospects.”

Bear in mind that Berkshire Hathaway’s portfolio had a nominal value of $242.1 billion at the end of 2019. Moreover, the firm held over 245 million shares in Apple (NASDAQ:AAPL), cumulatively worth over $71 billion, as of the end of the fourth quarter of 2019. Nonetheless, the size of this holding has experienced a decrease of 3.7 million shares relative to the prior quarter. Also, during the pertinent quarter, Berkshire sold 55.2 million shares in Wells Fargo (NYSE:WFC), 1.1 million shares in Bank of New York (NYSE:BK), and 6.3 million shares in Goldman Sachs (NYSE:GS) in what appears to have been a broad selling across the financial sector.

The following excerpt from Berkshire Hathaway’s 13F filings show a snapshot of its current holdings: 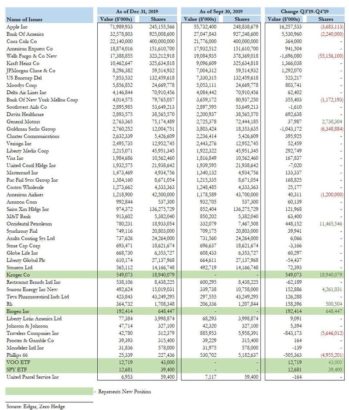 For the entire 2019, Berkshire Hathaway earned a GAAP profit of $81.4 billion. This includes operating earnings of $24 billion, realized capital gains of $3.7 billion and an increase in net unrealized capital gains of $53.7 billion. Notably, this $53.7 billion figure resulted from a new GAAP rule, imposed in 2018, that requires a company holding equity securities to include in its earnings the net change in the unrealized gains and losses of those securities.

In an interesting caveat, Warren Buffett warned investors not to pay too much attention to Berkshire Hathaway’s quarterly earnings:

“Wide swings in our quarterly GAAP earnings will inevitably continue. That’s because our huge equity portfolio – valued at nearly $173 billion at the end of 2018 – will often experience one-day price fluctuations of $2 billion or more, all of which the new rule says must be dropped immediately to our bottom line. Indeed, in the fourth quarter, a period of high volatility in stock prices, we experienced several days with a ‘profit’ or ‘loss’ of more than $4 billion.”

The oracle of Omaha also expressed his disdain of employing debt to juice-up portfolio gains:

“We use debt sparingly. Many managers, it should be noted, will disagree with this policy, arguing that significant debt juices the returns for equity owners. And these more venturesome CEOs will be right most of the time. At rare and unpredictable intervals, however, credit vanishes and debt becomes financially fatal.”

Finally, investors have been eagerly waiting for any news regarding Berkshire Hathaway's share buyback program. The letter revealed that Warren Buffett kicked his stock repurchase program into high gear, spending $2.2 billion on repurchases in the last three months of 2019, the most ever in a single quarter.