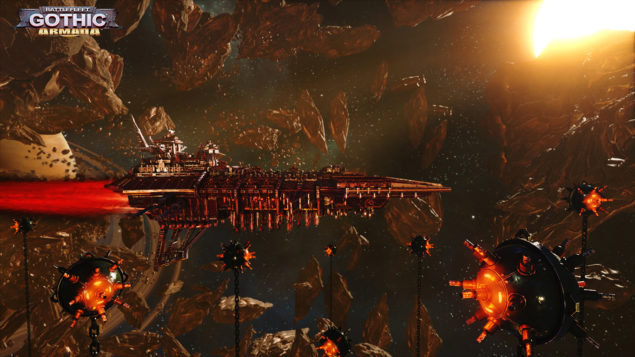 The team has placed great care in the creation of the Battlefleet Gothic: Armada campaign, creating cinematics mixing game sequences with artwork that will help tell the story of a world in constant evolution.

The Gothic Sector is in constant evolution, and new threats often make an appearance such as the Ork pirates, or the Eldar corsairs. The Chaos forces will often launch assaults on Imperial worlds, while your allies will request your support. Quite often, multiple events will arise simultaneously, requiring you to take critical decisions and bear the weight of their consequences, such as different access to resources, or available allies... in the end, your decisions will influence the unfolding of the Gothic War itself.

On a related note, pre-orders for Battlefleet Gothic: Armada are now open. To thank all those who will support the game before launch by pre-ordering it, the team has confirmed that they will receive the Space Marines additional faction for free. This faction is going to be playable in both Multiplayer modes and in skirmish. All those who pre-order will also gain exclusive access to the multiplayer beta, which will start a few weeks before the official launch.

Battlefleet Gothic: Armada will be released on PC during March on PC. A precise release date has yet to be confirmed, but we should learn more about the matter very soon.