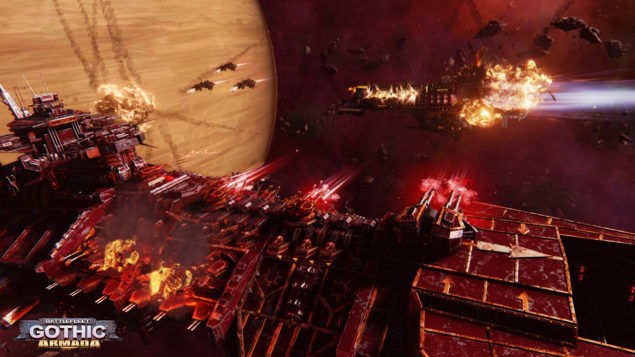 The new Battlefleet Gothic: Armada launch trailer, is a spectacular trailer showcasing some of the game's intense action and beautiful graphics. You can check out the trailer right below.

Battlefleet Gothic: Armada is a real time strategy game set in the Warhammer 40,000 world. Tindalos Interactive has placed great care in the creation of the game's main campaign, developing cinematics mixing game sequences with artwork that will help tell the story of a world in constant strife.

The Gothic Sector is in constant evolution, and new threats often make an appearance such as the Ork pirates, or the Eldar corsairs. The Chaos forces will often launch assaults on Imperial worlds, while your allies will request your support. Quite often, multiple events will arise simultaneously, requiring you to take critical decisions and bear the weight of their consequences, such as different access to resources, or available allies… in the end, your decisions will influence the unfolding of the Gothic War itself.

Early Battlefleet Gothic: Armada adopters will also receive additional content, such as the Space Marines and another faction that will be unveiled at a later time. The Early Adopters offer will be available not only to those who have pre-ordered the game, but also to those who purchase Battlefleet Gothic: Armada in the first two months of availability.

Battlefleet Gothic: Armada will launch tomorrow, April 21st, on PC in all regions. We will keep you updated on the new content coming to the game in the future as soon as possible, so stay tuned for all the latest news.