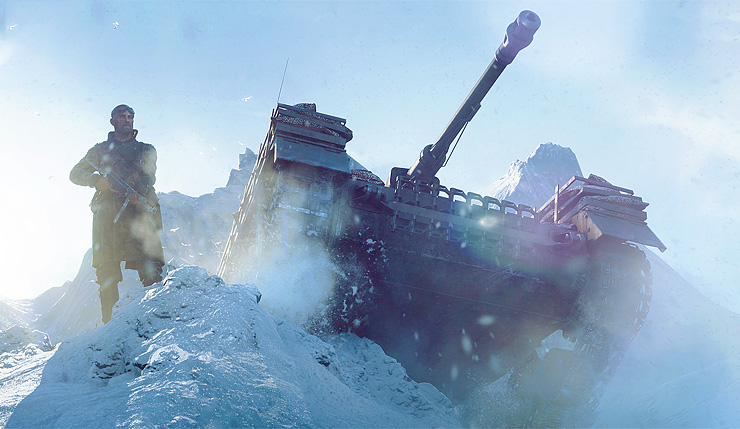 With early-access release only a couple weeks away, EA and DICE have provided an in-depth look at the 8 multiplayer maps Battlefield V will be launching with. These maps include Hamada (North Africa), Aerodrome (North Africa), Twisted Steel (France), Arras (France), Rotterdam (Holland), Devastation (Holland) Narvik (Norway), and Fjell 652 (Norway). We also get a quick look a Panzerstorm, which we be released for free post-launch.

Here are more in-depth descriptions of all the maps:

Hamada is one of two Battlefield V maps set in North Africa (the other being Aerodrome) and inspired by a strategic point between Libya and Egypt. This area was the scene of pivotal battles between the Axis and Allies during 1941 and 1942.

Can’t wait to leap into the cockpit of a fighter plane or behind the turret of a tank? This Battlefield V map is made for you. Ferocious vehicle combat is the focus of this all-out warfare map, but you’ll also need boots on the ground to take and hold the objectives. Infantry will need to focus on what scant cover they can find on the lower elevations, and head to the high ground to really make a difference. And speaking of heights, the flyable space on this map is immense, making it perfect for both intense dogfights and deadly strafing runs.

Aerodrome is loosely based on the British attacks on German installations, supply lines, and airfields in the Libyan desert in 1942–1943. Commandeered by Erwin “The Desert Fox” Rommel, the German troops were forced to retreat westward through Libya and eventually surrender following the attacks.

Dominating the landscape of this airfield (or, indeed, “aerodrome”) is a central hangar. A key strategic point that can be heavily fortified and defended, this will be a nest for infantry clashes, but daring tank pilots may also try their luck in what will be a severely contested area.

Twisted Steel is one of the two Battlefield V multiplayer maps set in France, the other being Arras. While not portraying a specific historical event, Twisted Steel is heavily inspired by the events at the fortified sector of the river Escaut in 1940, on the border between Belgium and France. Apart from the aforementioned impressive fallen bridge, you’ll fight in villages, across fields, and along a river on a map designed to bring those rural, Europe-based World War 2 fantasies to life.

Together with Twisted Steel, Arras is one of the two Western Front maps depicting the Fall of France which eventually led to a British retreat from continental Europe. It’s inspired by the May 1940 battle that took place around the town of Arras, where the allied side launched a counter-attack against the German army, advancing towards the channel coast.

In this rural area, you’ll see shades of the Soissons map from Battlefield 1 or even Harvest Day from Battlefield: Bad Company. The environments are beautiful, but don’t stare too long at the magnificent yellows of the canola fields – enemy tanks or snipers may pick you off.

The Rotterdam map is inspired by an unfamiliar conflict of World War 2, set in May 1940. Expecting little resistance, the German military pushed through the city of Holland, but were met by fierce opposition from the Dutch military.

Consider Rotterdam a spiritual successor to the Battlefield 3 Seine Crossing map with a hint of Amiens from Battlefield 1. It’s an urban environment decorated by canals, tall buildings, and a marketplace that no longer soothes pedestrians but preludes close-quarter firefights. The railway provides an elevated position to move across the map or oversee chokepoints with a ranged weapon from east to west – but is still dangerous if you don’t keep an eye on the railcar next to you.

The map is inspired by the second part of the Rotterdam blitz by the German forces. The Rotterdam map shows a thriving city in peril, while Devastation is a nearby section of the same metropolis, ruined by the terrible aftermath of relentless bombardments.

Direct roads have warped into an aimless blend of claustrophobic avenues of approach, obstacles, and defensive positions. Players will have to fight among these ruins, dried out canals, and the metal skeletons of buildings. Several places, most notably the cathedral, still retain their shape and can be used as defensive strongpoints. The abundance of cover left by the bombardments works both ways, so you’ll have to outsmart your enemy and not get trapped in a meat grinder.

This map is one of two inspired by the Norwegian Campaign, which took place in the spring and summer of 1940, in the northern port city of Narvik and the surrounding mountains (the other is the Fjell 652 map). Allied and Axis troops skirmish for control of this strategically vital location and the rich iron-ore (a critical wartime supply) transported by the city’s railway.

If you’re looking for a solid map with a little something for everyone in terms of play styles, Narvik is a great choice. Whether you want aggressive, close-quarters combat in the now ruined streets of the city center, or more open battle with clear line-of-sight options for Recon snipers down by the harbor, you’ll find it here.

The second map inspired by the Norwegian Campaign of 1940, Fjell 652 (“Fjell” is Norwegian for “mountain”) follows the fight as the Axis forces retreat into the cold, unforgiving peaks surrounding the port city of Narvik. In this unseen, untold story of World War 2, players advance on the treacherous mountaintops with the Allied army or attempt to try to hold their ground with the Axis forces.

Anyone who prefers infantry-focused, rapid close combat is going to spend a lot of time on Fjell 652. This map has a lot in common with the Battlefield 1 map Argonne Forest, particularly its small size and closed environment. Fjell 652, however, isn’t as linear as its predecessor, so it’s less a funnel than an open-air warren of complicated, narrow passages and rocky barriers. Another difference between the two is the addition of aircraft; planes can dart in and around the peaks dogfighting or strafing enemy positions. Control the summit and force the enemy pilots to prove their skills in the gorges below.

Looks like a decent assortment of battlegrounds. The tank-heavy Hamada and mountainous Fjell 652 maps look particularly interesting. EA and DICE recently detailed Battlefield V’s first few months of free post-launch content, which will include 2 new maps – the Panzerstorm map mentioned above, and another map set in Greece. Get more details here.