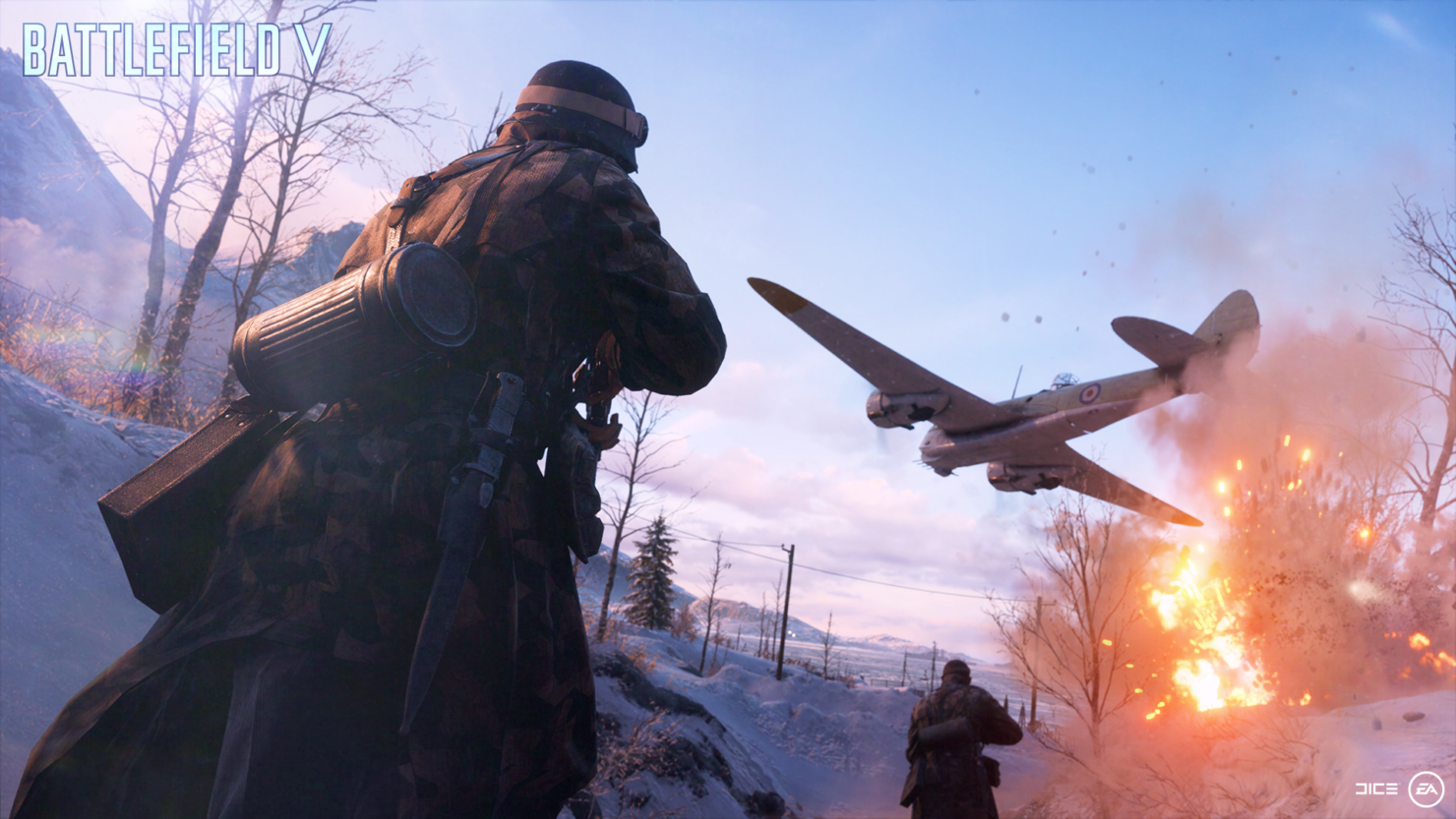 Shortly after the wrap-up of EA Play 2018’s press conference, we had the pleasure of spending an hour with the PC pre-alpha build of Battlefield V. It might not have had the (Battle) Royale mode or War Stories that were both announced during the morning’s presser, but it did allow us to play Grand Operations, an expansion of Battlefield 1's Operations.

What we got our hands-on was but a brief sliver of the Grand Operations mode across two days of missions, while the mode will actually span a full three-day fight (and even a fourth if there's a stalemate going on, with only one life per soldier). Depending on which side of the World War you fight for, the mission breaks down into attacking and defending objectives of various types.

As the allies fly into the Port of Narvik in Norway on Day One, their mission is to seek out and destroy a few anti-aircraft flak guns via explosive charges. The Axis forces, as you would expect, have to defend all three cannons from being demolished by depleting the Allies’ limited number of redeployments and troops. Fully depleting the Allies’ forces guarantees a win for that day, but if the Allies can complete their objective, a sliver of the remaining tickets gets added to the second day’s reinforcements. The second day’s objectives went back to the likes of Conquest with capturing and holding numerous points. Once captured, the enemy team couldn’t take back that strategic location, so it helped funnel the combat down into one or two main points of engagement that end each match with an explosive finale where working with your thirty-one other teammates is essential to bring victory to your side. The defensive side had access to buildable fortifications as every class (just hit T and your toolkit will pop out, showing highlights of where you can build sandbags and other anti-infantry/tank barriers, no resources needed) as well as towable vehicles, but I didn’t get much chance to look at the latter. The fortifications were fairly limited to various chest-high obstacles, taller walls of sandbags, and being able to board up windows but there’s plenty more that I didn’t get a look at yet either. Furthermore, the support class can build faster while having access to exclusive options such as gun emplacements and resupply points.

If you’re worried about wasting a ticket and having to respawn, you’re given a limited amount of time to hold in a button and call out for a revival. As you’re downed, you have free control to swing the camera around and see if someone is trying to sneak up on your medic buddy as they’re reviving you. Right now, the amount of time you have to wait out between getting downed and joining the next redeployment feels a bit lengthy, but that is in part due to reinforcements being rolled out in timed waves.

Vehicles in Battlefield V, especially the tanks and light armored vehicles, still feel balanced enough that they can easily take out an enemy troop (yes, roadkill victories are still in, assuming you can navigate a bulky vehicle around in the tighter corridors between buildings) while not being impenetrable. 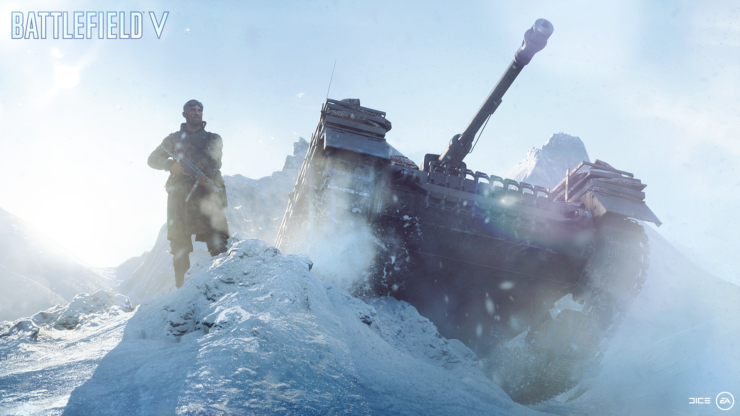 In the pre-alpha build of Battlefield V, we were only given one kit for each class to work with. This meant being unable to see the other specialists that were talked about in the media briefings but I hope to see more of those in the near future. Most classes only had one or two primary weapons and utility items to work with, such as the Field Medic having access to either a standard SMG or a semi-automatic rifle that could easily rival the sniper in efficiency if you were quick enough to land two shots on an opposing player. The Sniper class had access to both a Flare Gun and mobile spawn beacon, which I found the latter to be much more beneficial (if we had played on a night map, maybe that would be a different story).

Each gun in the Battlefield V pre-alpha felt just as impactful as they did in previous games. Pistols didn’t feel like a backup tool and could easily be used to dispatch two or three enemies if you got the drop on them. The Bren LMG, unique to the Support class, felt like it could be useful for mid-range sniping if you toggled its fire rate down to semi-auto and learned to compensate for the bullet velocity and drop. None of the weapons felt like I was firing a laser that would hit exactly where I was aiming every time, as certain weapons in Call of Duty feel. Longer range engagements needed a bit of finesse to adjust for each caliber’ trajectory and the quick mental math to calculate bullet drop on the fly never took away from the challenge.

Battlefield V ran on a single GeForce 1080Ti and one of the newer Acer Predator G-Sync monitors running upwards of 144FPS from what I could tell. It couldn’t quite hold that triple digit framerates once tanks, grenades, and all other manner of explosives all converged on the player at once, but I never had it dip down to an unplayable framerate in my hour-plus session. DICE really wanted players like myself to see the destruction going on in their Frostbite engine, so particle effects and geometric deformation was cranked up to its maximum (metaphorically, of course. We couldn’t sneak a peek at the in-game options). Snow blasts, flying wooden shrapnel from buildings being destroyed by light artillery, and the whizzing of tracer rounds all give Battlefield V an over-the-top sense of destruction and I felt like I was playing in Michael Bay’s newest take on World War II. At times, the overwhelming destruction could be a distraction away from a firefight with the enemy but if you’re playing on a PC that can handle it, cranking Battlefield V up to its maximum settings should be the only glorious way to play.

Even if it was but a brief couple of multiplayer sessions, I’m already convinced that Battlefield V is the worthy successor to The War to End All Wars. What EA and DICE have in mind to offer in terms of paid cosmetics and ‘weekly airlifts’ still have to be decided, but if all of the weapons can be earned by skill and time alone, this could be the next great FPS I find myself dedicating my time to.

Battlefield V will launch globally on October 19th for PC, PlayStation 4 and Xbox One, with the various special editions and Origin Access Premier offering players a chance to jump in a few days early. I’ll be there on day one rocking the Field Medic kit or whatever special variant I happen to unlock as long as it gives me a bolt-action rifle or light machine gun. Just give out a quick call out for healing and you might just find me on the battlefield. Below you can find over thirty minutes of uncut Battlefield V on PC gameplay featuring yours truly.