Having a Launch Event isn't precisely an entirely new concept, but having a launch event where you pretend to be a criminal from a game in real life, is kind of new and odd I'd say at least. Electronic Arts UK has set up an event they are calling 'Battlefield Hardline: Live' where you can win 10.000£. 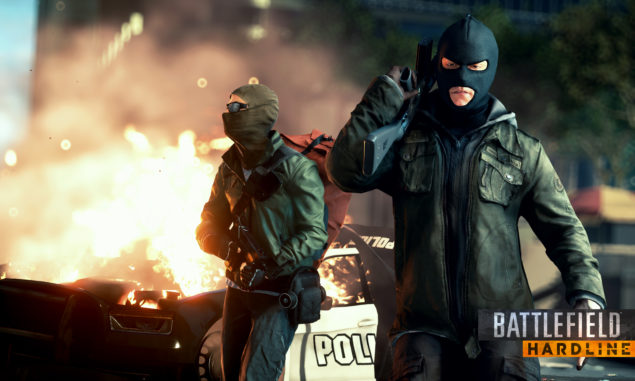 Win 10.000£ by pretending to be a real crook in Battlefield Hardline: Live

EA announced today that they will be holding sort of a Launch Event for Hardline in London, an 8 day long event that will kick off March the 18th and finish on the 25th. It will be a "one-hour controlled yet immersive experience", where the winner will be able to walk away with 10.000£.

Welcome to the world of crime and revenge! Battlefield Hardline: Live (#BFHardlineLive) is giving you the chance to fulfil your criminal fantasies by leading your crew in a high adrenaline, high stakes experience that could see you win £10,000.

Those that win the opportunity to take part in Battlefield Hardline: Live against other crews will lead their chosen crew in to a murky world where deceit and destruction are all in a day’s work. Rescue the VIP, explore the vault, avoid guards and plan their escape to pull off the perfect crime.

Well you can definitely hear that they are British in the above video.

Think you’ve got what it takes to survive the underworld – get in, get the goods, then get out without being caught? Enter to stand a chance of winning a place for you and your four chosen crew members to take part.

I guess an event like this could be kinda cool, the only downside is obviously that its going to be limited in how many people that can participate, there's one pretty interesting line of text over at the sign-up site though:

"the winning crew leader claiming the £10,000 bounty but then facing a dilemma – would you keep it all or share with your crew?"

Does that mean that someone could potentially screw over their 'crew' and take the prize money for themselves, if so then you'd better sign up with some mates you know won't stab you in the back. I know I'd buy a bunch of new hardware for a share of the prize money.

Battlefield Hardline: Live will take place at a secret Central London location for eight days from March 18 until March 25, and the sign-up site can be found Here. The game itself launches March 17th on PC, PS4,  PS3,  Xbox One, and Xbox 360.