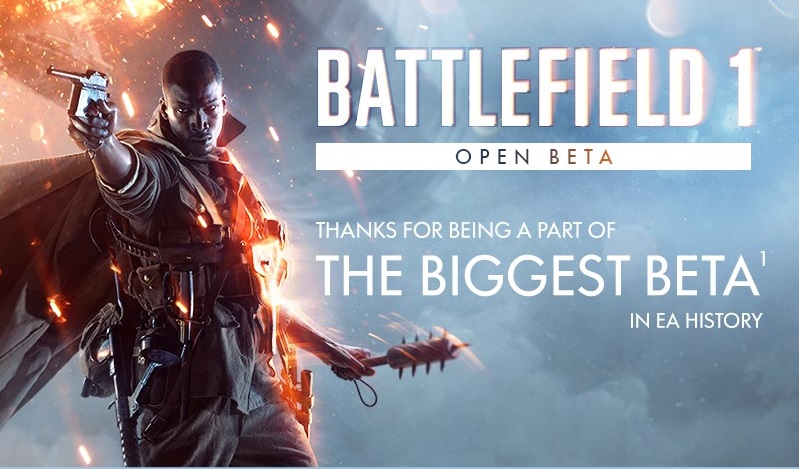 13.2 million players have played the Battlefield 1 beta, thereby making it the biggest beta in EA’s history.

The Battlefield 1 open beta kicked off for PC, Xbox One, and PS4 on August 31 and ran till September 8. The beta included the Sinai Desert map and 2 game modes – conquest and rush.

Following the beta, EA has now released an infographic with the most interesting statistics. The most interesting one being the total number of beta players – 13.2 million. EA notes that this number is “more than double the strength of the British and Ottoman empires deployed in the middle east during World War 1”.

First of all, a huge thank you for playing in the Battlefield 1 Open Beta. It was exciting playing beside you last week. Looking at the moments you've been sharing we cannot help but feel humbled by the dedication you've shown. You've helped make this the biggest beta in EA's history – a huge feat! It impressed us so much that we decided to put together an infographic with some of the most interesting stats we discovered.

The Assault class was the most popular deployed class during the beta, followed closely by the Scout class. Other interesting tidbits are that almost 29 million melee kills have been made in the week-long beta. Beta players seem to have been quite fond of making horse kills – more than 62 million kills were made while riding a horse.

Secondly, I want to personally thank you all for the great feedback you've given us. We're trawling through forum posts, social media mentions, and digging into some great data. We're identifying what worked well, and what didn’t work as well. We truly value your input. In the near future, we'll have more details on the changes we'll be making to the full version of the game (yes, the Light Tank performed a little too well, that will be addressed).

Battlefield 1 releases on October 21 for PC, PS4, and Xbox One. Those on EA and Origin Access will be able to play the game on October 13.