First Look at Batman Arkham Knight’s Batgirl: A Matter of Family DLC and Some Story Sypnosis

Besides working on the PC version, Rocksteady is also taking Batman Arkham Knight DLC very seriously. After the fiasco of the PC release, the developer wants to make it up to the fans with amazing upcoming DLC for the game. The first one that we have coming is the Batgirl: A Matter of Family DLC, which will release on July 14 for season pass holder and on July 21 for the rest of the gaming community. As reported previously, the Batgirl DLC pack for Batman Arkham Knight will be free for season pass owners while for the rest, it will have a price tag of £5.79. Today, the gamers are getting their very first look at the upcoming Batgirl DLC. Check out the newly released screenshot below. 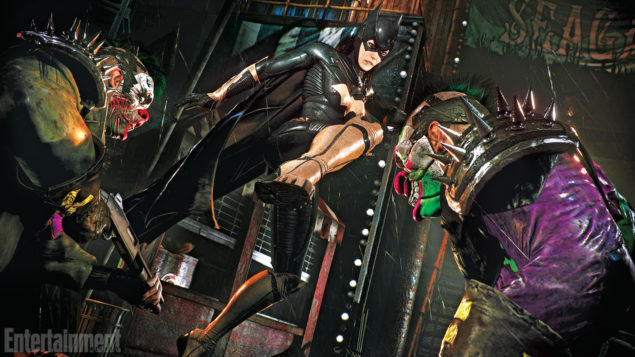 A New Setting for the Upcoming Batman Arkham Knight DLC

Today we get our first sneak peek at the Batgirl DLC story which is said to have been set prior to the events of Batman Arkham Asylum and takes place in a new arena known as the Seagate Amusement Park, which is a Joker-created massive death trap.

“We wanted to recreate the feeling of being trapped in a bizarre and unique open environment playing a game of cat and mouse with the Joker,” says Justin Vazquez, design producer of the DLC. “Our intention was that Batgirl should be less powerful than Batman, but that Batgirl plus hacking could give her opportunities do things that not even Batman can pull off.”

The DLC sounds quite fun and looks like it will be a bit different than the actual game. So, it'll add a bit of freshness to the ideology of Batman Arkham Knight. About the storyline, we know from previous releases that the story is set prior to the events of Batman Arkham Asylum. This upcoming DLC has been developed by Warner Bros. Montreal instead of Rocksteady.

In the new DLC, Batgirl uses her intellect to beat the Joker. You see, unlike Batman, Batgirl has several other qualities to her name as well and one of them is the ability to hack enemy computers to move past levels. “Hacking is really what separates her from the other characters. It’s a gameplay mechanic with which the player can create situations for Batgirl to really shine,” Vazquez says. “Our intention was that Batgirl should be less powerful than Batman, but that Batgirl plus hacking could give her opportunities do things that not even Batman can pull off.”

Stay Tuned for more information on Batman Arkham Knight and its future DLCs and do share your views with us in the comments section.