Finally, the reviews are out for Batman: Arkham Knight and I have to say that they are expected. A lot of the reviewers give the game top marks in all aspect and regular 9's out of 10 except for one anomaly that is the Gamespot review which apparently marks the game down for its predictability of reveals, Forced use of the Batmobile, and monotonous encounters and mediocre boss fights that hurt the second half of the game. Apart from that the reviews have been quite positive for Batman: Arkham Knight and we can more or less ignore this outlier to look at the overall performance of the game.

Moving on to the news at hand, Batman: Arkham Knight has received yet another setback as the game's Limited Edition gets delayed due to an issue with the "Packaging Quality." 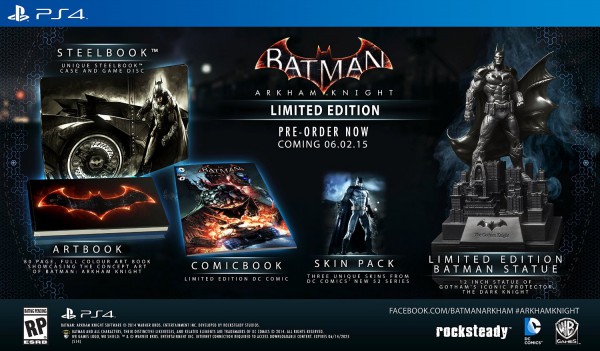 Amazon "We want to ensure that your order reaches you in Pristine Condition... no later than 14 July, 2015"

Retrieved from Eurogamer's coverage of the story, an e-mail was sent to the Amazon customers that states that the £80 Amazon-exclusive Limited Edition of the Rocksteady's Batman: Arkham Knight was delayed due to a “packaging quality issue” at the manufacturer.

“We want to ensure that your order reaches you in pristine condition and your item, with the updated packaging, should be with you no later than 14 July, 2015,” stated Amazon.

This also seems to be affecting Gamestop's Limited Edition of Batman: Arkham Knight as well. And both the retailers will be sending their customers with download codes so that this hurdle does not delay the game and they can enjoy it to their satisfaction by June 23rd.

The e-mail was was only sent to the UK customers but we're not sure that this is the case with customers from North America as well. While searching for the item the description says: “Currently unavailable: We don't know when or if this item will be back in stock.”

It was also announced earlier this week that Batman: Arkham Knight's Batmobile Edition was also canceled due to “unforeseen circumstances that greatly compromised the quality” of the Batmobile collectible. We don't know what the issue is for now but we hope that it gets resolved soon and will keep you updated if there is any more information regarding the problem. Until then, do share your views with us in the comments sections and enjoy the game with you download codes as it releases next week on your PC, PS4 or Xbox One.