AWAY: The Survival Series Interview – On Ubisoft DNA, Ray Tracing, Xbox/Next-Gen, and More 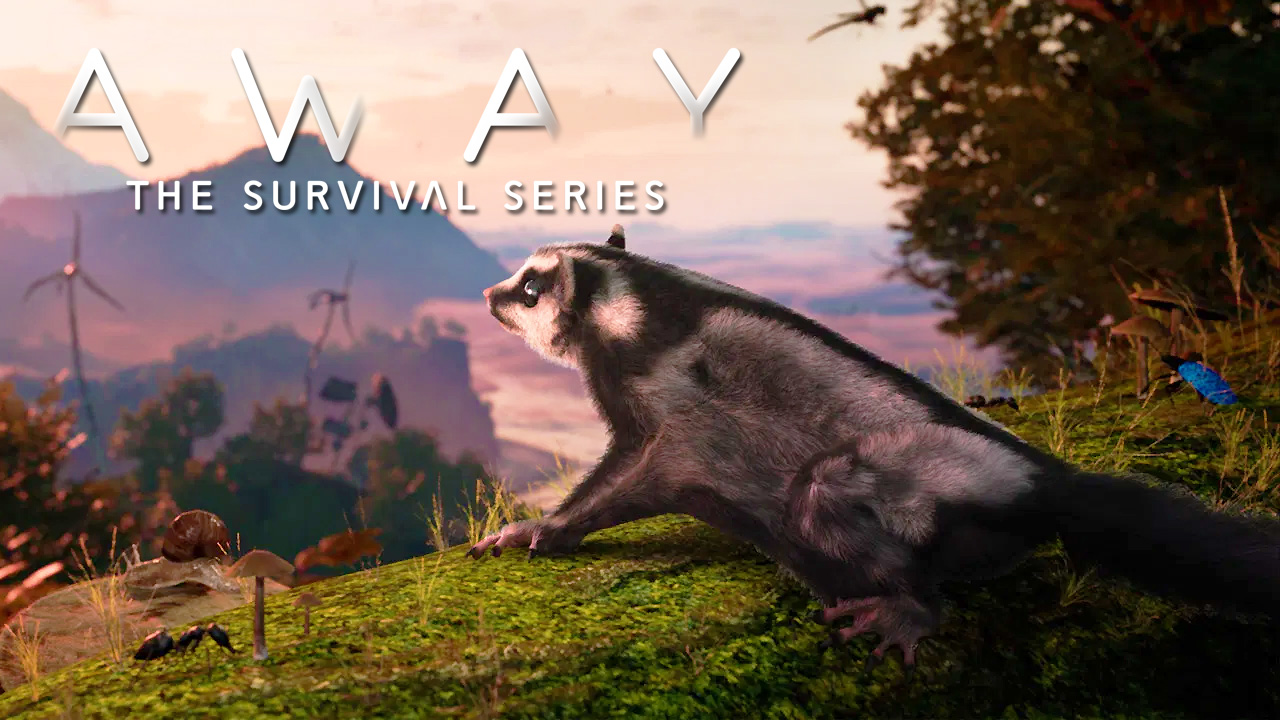 Have you ever had the desire to control a nature documentary? To personally eat or be eaten, instead of just watching it play out as David Attenborough narrates? Well, AWAY: The Survival Series from freshman Montreal-based developer Breaking Walls aims to deliver just that. The eco-adventure casts players as a tiny sugar glider (as well as a handful of other animals) that must navigate a dangerous future world affected by climate change, and seemingly free from human civilization. It’s an ambitious concept, but early gameplay has looked promising.

I recently got a chance to chat with Breaking Walls’ André-Paul Johnson about AWAY: The Survival Series’ approach to depicting climate change, ray tracing, the possibility of a photo mode, Xbox and next-gen versions of the game, and more! Scamper on down for the full interview…

Playing as a sugar glider certainly looks fun, but what's your overarching goal in the game? Beyond finding tasty new bugs to eat, of course.

Set in a distant future where nature has reclaimed the planet, AWAY takes you on a perilous journey to save your family. This journey will take you deep into the wild as you explore new environments and encounter many new creatures. But at the end of the day, your overarching goal is to save your family before it's too late.

What can we expect in terms of structure? Early gameplay has shown plenty of exploration, but is this a full open-world experience? Or more of a "wide linear" approach?

I like the term "wide linear." We typically describe AWAY as a story-driven adventure game, similar in style to Journey. The game is mostly linear, but throughout your adventures you will have the opportunity to stray off the beaten path and explore your environments to discover new creatures, search for human artifacts, and even embark on some brief side-quests.

Much of the Breaking Walls team previously worked at Ubisoft, so I'm wondering how much of that Ubisoft DNA is in Away and how (or if) you're looking to differentiate the game from what you've done in the past. That isn't a jab, the Ubisoft approach works great for Assassin's Creed, but I feel like things like mission markers and minimaps would break immersion in a game like Away.

From the very beginning, we designed AWAY to be as immersive as possible, which meant removing all unnecessary elements from the screen. You won't find any mini-maps, mission markers, or busy UIs when you play the game. Instead, the minimal stamina and health UIs only show up when they're needed, and if you get lost you can tap into the sugar glider's instinct ability to point you in the right direction. 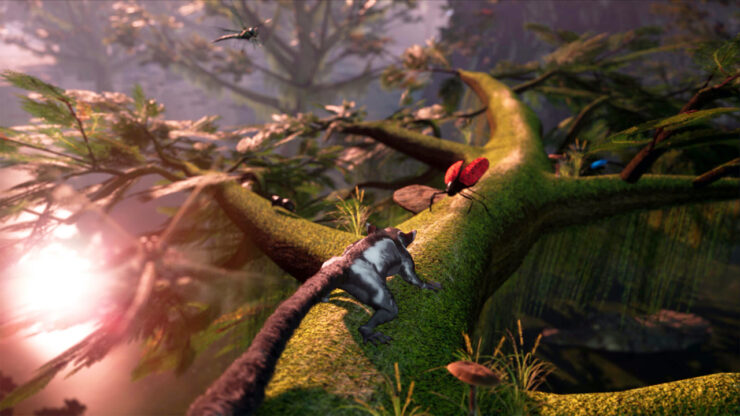 How interactive are the ecosystems in AWAY? If you had the time/inclination could you mess around with the natural order of things?

As you explore AWAY's environments, you can interact with the creatures and plants that surround you — for instance by eating mushrooms, chasing down lizards, fighting off spiders, or sneaking past hungry wolves. That said, you will not be able to alter the ecosystems themselves, although that could be a neat idea for a future sequel!

In addition to the sugar glider, you can take command of other animals. How many different critters can you play as? Can you pretty much inhabit anything you come across?

I don't want to spoil too much, but AWAY has about a dozen or so animals and insects that you can possess throughout the game. Some of them can be played in side-quests, while others are hidden in your environments, almost like small easter eggs that you can discover if you explore off the beaten path. These playable animals are not a core part of the gameplay or storyline, but they do allow you to experience nature from a whole new perspective!

AWAY takes place in a world where humanity has seemingly been wiped out -- will we ultimately find out what happened to us? Will living humans factor into the game at any point?

As you progress through the story, you will start piecing together what happened to humanity. And the more you explore your surroundings, the more information you will gather through ruins and artifacts scattered around the world. There is a larger story being told if you choose to go looking for it. 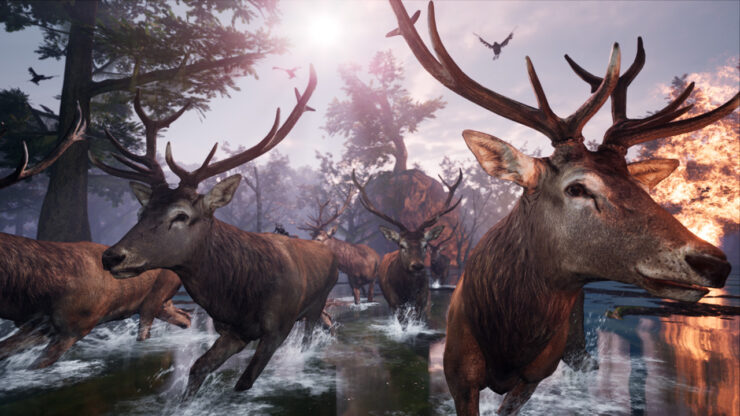 You've said AWAY takes place in a world beset by the after-effects of climate change, but the footage we've seen so far has made the world look kind of pleasant honestly. Will we also see the darker side of climate change?

Haha, yeah…AWAY's environments do look quite idyllic — perhaps because humans are no longer around to destroy them! That said, the game is set in a distant future where climate change has drastically altered nature's balance, and you will experience this firsthand as you journey deeper into the wild. Let's just say nature isn't as kind as it looks...

Speaking of the world looking nice, will the game have a photo mode? Or maybe even something more advanced? The option to stage and film your own little nature documentaries would be cool.

We would love to include some sort of photo mode in AWAY — whether at launch or in a future update. We can't say what this feature would look like just yet, but it's something we have discussed internally and that we think would add to the gameplay experience. 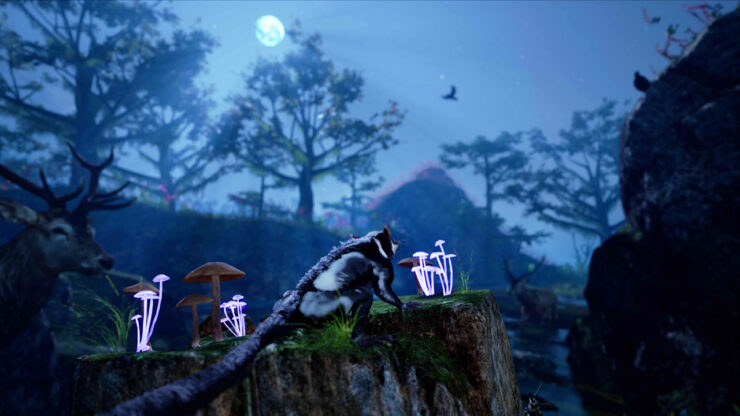 We’re a tech site, so I have to ask, any thoughts about implementing new visual techniques like ray tracing? Are some of these things already in the game?

We've played around with a few of these techniques in AWAY, and while we haven't implemented features like ray tracing yet, it’s something that we would like to add to the game at some point in the future.

AWAY has been announced for PC and PS4. Are any other platforms, most notably the PS5, in the plans?

Along with PC and PS4, we've just announced today that AWAY will also be coming to Xbox One! As for next-gen platforms, we can't confirm anything yet, but I can say that AWAY would look pretty amazing on the new consoles.

The game is currently slated for "early 2021" -- could you narrow that release window a bit for us?

Unfortunately I can't reveal anything today, but we have big announcement coming soon that might answer this question a bit better. Stay tuned for more info! 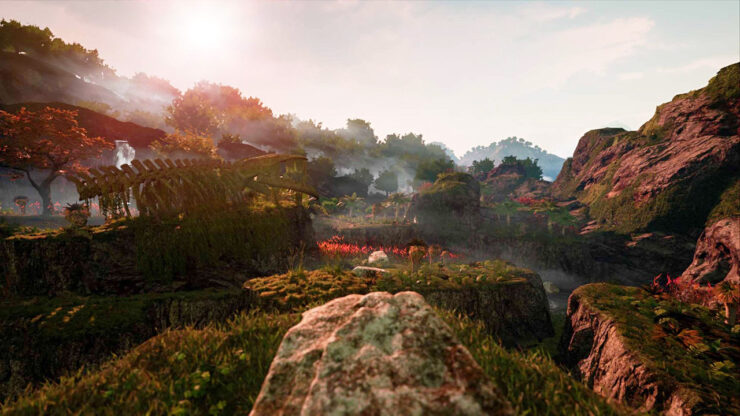 Finally, what do you want players to take from AWAY: The Survival Series? Are you just looking to entertain or are you also hoping to educate and maybe even change minds as well? What do you hope players feel when they reach the end credits?

From the very beginning, one of our objectives with AWAY was to shed more light on the dangers of climate change and how it could affect our planet if left unchecked. We hope that in addition to being a fun, immersive experience, our game can bring players to reflect on what can be done to preserve our planet.

AWAY: The Survival Series arrives on PC (via Steam), Xbox One, and PS4 sometime in early 2021.