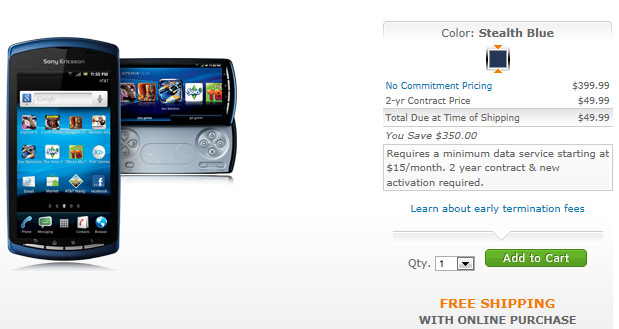 Sony Ericson's Experia Play 4G has launched on AT&T with a price tag of $399 or $49 with a two year contract. The Xperia Play 4G is running a 1GB Snapdragon processor with 512MB of RAM, 1GB internal memory and a 4" display at a resolution of 480 X 854 pixels. Networking includes, 3G, 4G with HSPA + and the phone is powered by a 1500mAh battery and runs Android OS. The best bit about the phone though as you can guess from the "play" in its name is that its targeted at users who love mobile gaming. The device is PlayStation certified, has access to PlayStation games and it comes bundled with 8 games out of the Box such as The Sims 3, Asphalt 6 and Crash Bandicoot.