Earlier, it was confirmed that Verizon would be allowed to start selling the iPhone 4 on contract to consumers allowing for a break on the long held on monopoly by AT&T when the subject of iPhone on contracts was the question in mind.

Verizon has a few tricks up their sleeves when it comes to planning for the iPhone 4 release for consumers, they have a very interesting plan outlined for the phone for new consumers which when compared to AT&T, seems like a great deal.

Here is a semi confirmed comparison between the differences between the 2 networks plans. 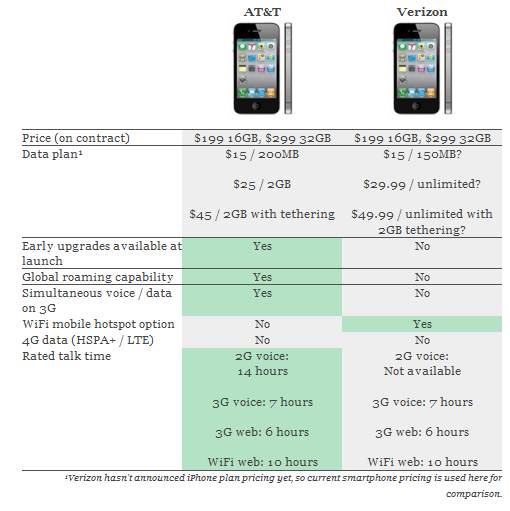 As you can see the most noticeable difference between the two networks is the addition of Wi-Fi hotspots which is coming up in iOS 4.2.5, aside from Wi-Fi hotspot Verizon might also offer an unlimited data plan for a mere $5 while AT&T is still offering a 2GB limit on $25.