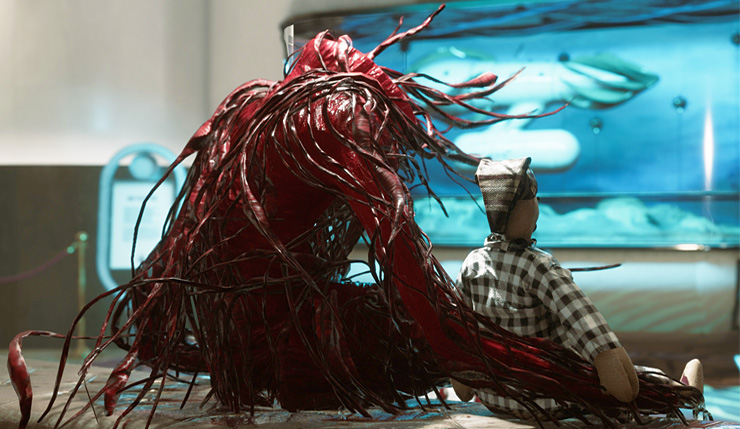 It’s been a while since we’ve seen or heard anything of Atomic Heart, but the game has now come out of hiding with seven minutes of new gameplay. Atomic Heart originally made headlines as one of the first indie games to promise to make use of NVIDIA’s then-new ray tracing and DLSS tech, and this new footage continues to look impressive. In addition to a wide array of futuristic shiny surfaces, we also see a showdown with an intimidating new enemy called a Plyush, which developer Mundfish describes as an “organic enemy that might just be a product of some secret governmental deeds.” Hmmm! Check out the footage below.

Want to know more? In a brief interview with IGN, Mundfish provided this very basic description of Atomic Heart’s story (they want players to mostly go in spoiler-free).

The game kicks off when robots start attacking people. [The game’s protagonist] P-3 will have to investigate what has caused all these events and deal with what (or who?) is behind all of this.

Mundfish have also revealed that Atomic Heart will be coming to next-gen consoles, which will allow them to deliver their vision without any visual compromises…

Our game will have no loading screens due to [the] fast SSD. Next-gen hardware also provides an exclusive opportunity to fulfill our artistic vision and deliver our game with stunning visuals with no downgrading, which was absolutely essential for current gen.

Atomic Heart is coming to PC, Xbox One, Xbox Series X, PS4, and PS5. The game was originally supposed to launch in 2019, but obviously that didn’t happen. The game doesn’t currently have a release window, although Mundfish promises they’re in “active development.” What do you think? Are you interested in Atomic Heart? Its gameplay looks somewhat reminiscent of Arkane games like Prey and Dishonored, so I’m definitely keeping an open mind.