CPU utilization is an important question to ask as well. It tells us just how hard a CPU has to work in concert with the GPU in order to provide a better and more visceral experience. DX12 and async compute allow the offloading of some of those tasks that even the CPU would complete onto the compute queue. For this test we're going to look at total CPU utilization by using Task Manager, which is a surprisingly robust utility. I run the benchmark with Task Manager open in the background, alt-tab to the Task Manager, then use the clipping tool to acquire the screenshot. After this we'll go much deeper into actual core utilization with HWiNFO64, a robust and very reliable tool. For this, I start HWiNFO64, then start the benchmark.

Of course we'll start with a graph from Task Manager, just to see the overall usage as reported by Windows itself. 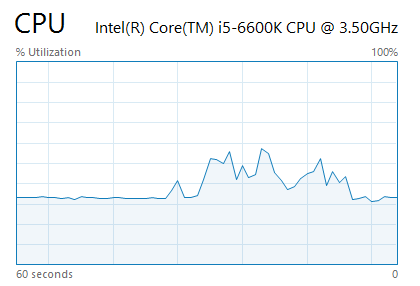 The Skylake results seem to be a mixed bag. The performance is adequate, certainly, but for some reason when we actually look at the amount of time that the CPU is operating, it's actually quite low. That's not necessarily that high, so it's not really CPU limited, even if there are only four total threads.

Looking a little deeper using HWiNFO64, we can see that all four threads are following very similar patterns of utilization. The threads seem to over between 26% and 80%, working hard the entire time. Usage is being spread across the cores fairly evenly here. You may be wondering why the time is a bit longer here than with the i7-5960X down below, well that's because it took longer to load to get to the benchmark itself, due to the benchmark residing on a platter based HDD as opposed to a PCIE based SSD for the i7-5960X rig.

What about the trusty Haswell-E, though, how does that fare with this benchmark?

The obligatory Task Manager info screen, showing a slightly low usage. That isn't quite the whole story however. 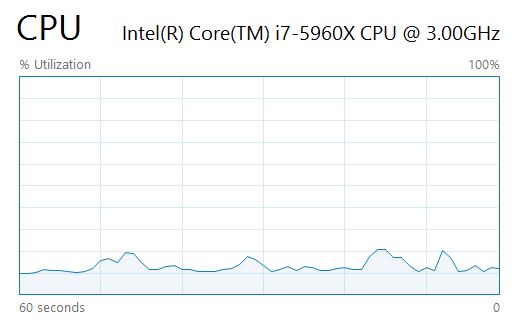 To delve a bit deeper, we'll use HWiNFO64 once again to Haswell-E seems to be quite the busy beast when paired with that same R9 Fury Nano. Thread usage isn't constant among the 16 threads, though it one in particular gets to around 65% utilization, with the rest hovering between 1% and 54%. The mess of spaghetti below shows you the state of the various threads. Yes, it's certainly a lot of info, but the main points to take home are that are that utilization seems to revolve around a few cores, while the rest stay less used.

Benchmarking keeps performance with an R9 Nano at ~76FPS, a number that's only a few away from what it was using Skylake. It's curious that the performance is very similar despite having more cores to work with. Also, the i5-6600K doesn't appear to be going into any low-power states, and the utilization is consistent throughout the test. The same is not necessarily true for the i7-5960X.