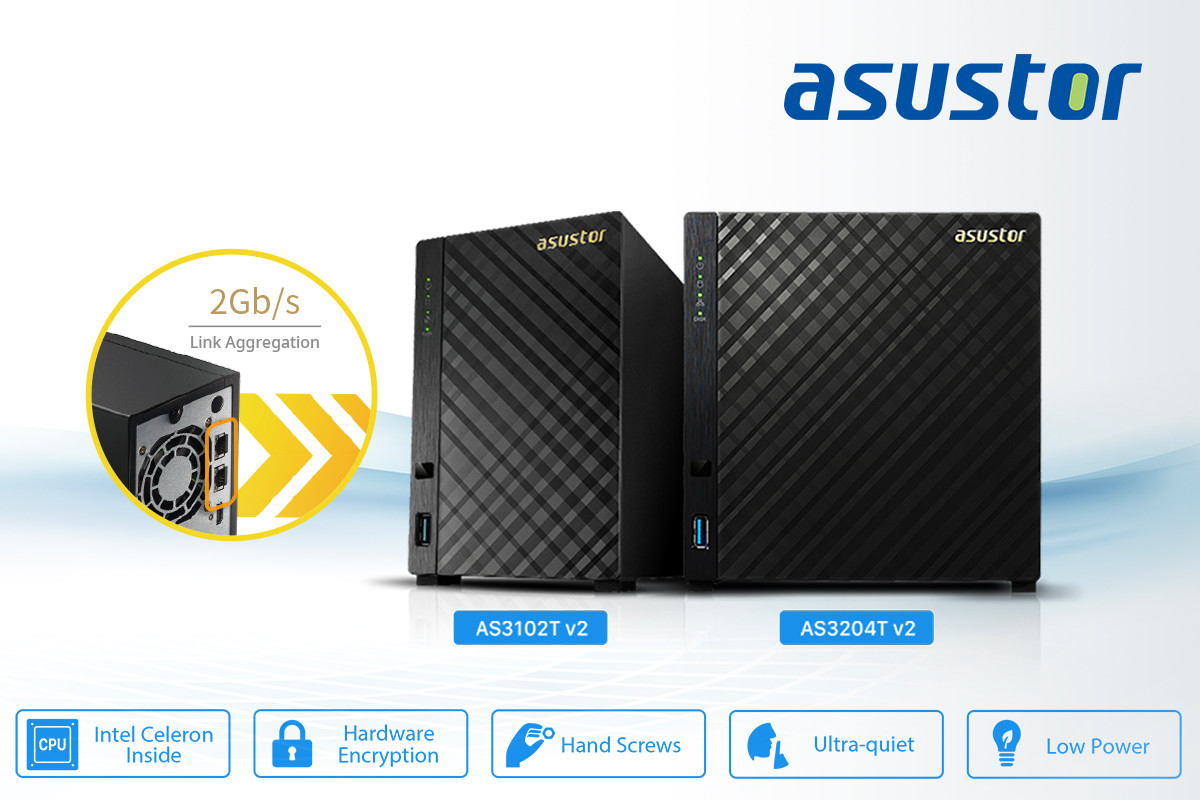 ASUSTOR Inc. today released two new NAS models, the AS3102T v2 and AS3204T v2, which improve on the previous design of multimedia NAS, The AS3102T and AS3204T. The AS3102T v2 and AS3204T v2 are equipped with two Gigabit Ethernet ports, allowing the use of network aggregation settings to double the network performance of the NAS. Increasing the amount of Ethernet ports allows hard drives to make better use of their rated speed for those who need it, such as those in the AV industry. Our new models also support the Intel AES-NI instruction set, which increases encryption and decryption performance using the CPU. Large amounts of data can now be encrypted far more quickly and helps increase data security and efficiency for storage, backup, and remote access.

The all new AS3102T v2 and AS3204T v2 will ship with the latest version of ADM, making backups and storage easier than ever. Choose from more than 200 apps on App Central. ASUSTOR NAS devices are also compatible with a wide variety of USB DACs and can be easily integrated into an existing HiFi audio set. AiMusic can easily play music remotely so that music can be listened to anywhere with an internet connection as well. ASUSTOR has also improved remote connection features in the up and coming ADM 3.2. Ezconnect.to, ASUSTOR's new remote web login service does not need configuration of the router, instead only requiring an ASUSTOR Cloud ID. Just type in the designated URL with your Cloud ID and login to enjoy the convenience of accessing your NAS from anywhere.

"The AS3102T v2 and AS3204T v2 integrate business-quality hardware into an affordable NAS to help increase performance and reliability. Since some higher capacity drives contained only four screw holes, we have redesigned the hard drive bays to be compatible with drives that feature four or six screw holes, greatly increasing the flexibility of an ASUSTOR NAS. Therefore, those who need high performance and high storage capacity, the AS3102T v2 and AS3204T v2 are the best choices."

The drives are expected to be released in the next month or so and pricing has yet to be announced.