A few months ago, ASUS announced several ROG (Republic of Gamers) products which included their high-end, ROG MATRIX GTX 980 Ti Platinum graphics card. The premium ROG MATRIX label ensure that the products that are made in this category deliver the best performance, best quality and best features. The ROG branded cards have always been aimed at the enthusiast market and the ROG GTX 980 Ti is one hell of a premium product. 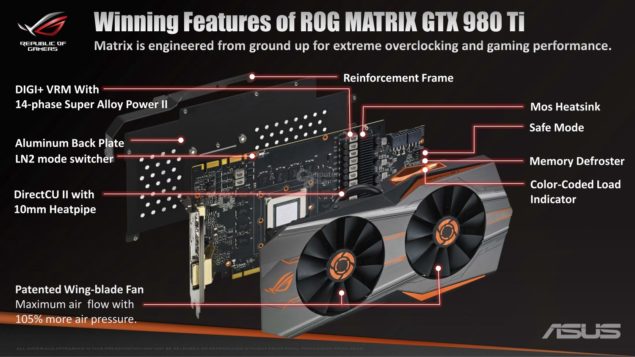 The ASUS ROG MATRIX GTX 980 Ti Platinum is the most high-end graphics card offering by ASUS in the GeForce stack. With the GeForce GTX 980 Ti, NVIDIA allowed full custom design and ASUS takes the advantage of that to make the ROG MATRIX much faster than the reference offerings. The ROG MATRIX GTX 980 Ti Platinum feature the GM200-310-A1 core which has 2816 CUDA cores, 176 texture mapping units and 96 ROPs. The card has the same 6 GB GDDR5 VRAM running across a 384-bit bus but has the memory clocked at 7200 MHz effective clock speed which delivers a cumulative bandwidth of 345.6 GB/s. The card has two Boost clock speeds configured at 1291 MHz (Gaming Mode) and 1317 MHz (OC Mode). Rest of the specifications are quite the same as the stock GeForce GTX 980 Ti graphics cards but the PCB and cooling scheme changes that, offering more overclock head room and additional performance gains while operating quiet and stable.

The PCB of the ROG MATRIX GTX 980 Ti Platinum is a marvel of engineering. We have seen some great PCBs with almost all custom GTX 980 Ti cards from manufacturers such as EVGA, GALAX, Gigabyte, ZOTAC, MSI, etc and ASUS's solution falls under the same league. The PCB of the card features a 14-Phase DIGI+ VRM with the latest Super Alloy II components that include SAP II capacitors, SAP II chokes, SAP II DrMOS, SAP II PSOCAP to deliver 30% less power noise and 5 times greater durability than standard designs. The PCB also uses the DIGI+ voltage regulator module to enhance digital voltage regulation through the Super Alloy II components. ASUS also uses the memory defroster technology on their cards which defrosts the ice from the PCB when using the sub-zero cooling solutions such as LN2. The whole PCB is in fact designed through ASUS's AUTO-EXTREME tech which is a 100% automated production process for unsurpassed quality and reliability.

From the looks of it, the latest ROG MATRIX cooler seems to feature the same cooler shroud and the design looks familiar to the current MATRIX cooler. The difference is mostly the shroud color theme and texturing while adopting the dual fan design. The card is a standard dual-slot product and has a metallic surface which looks good but orange and brushed metallic silver color scheme. ASUS already went with red color on their STRIX GTX 980 Ti graphics card so it kind of makes sense to have a different color scheme on the ROG based graphics card. The card will feature an impressive cooling solution that incorporates dual-fan design with Wing blade Fan technology that deliver 105% more air pressure to blow through the DirectCU II heatsink and its six 10mm heatpipes. In ASUS's own testing, the cooler performed 30% better than the reference NVTTM design with load temperatures of just 66C while being 3 times quieter than the reference design with an operational noise of 28 dB.

As for performance, the card being an overclocked model is definitely faster than the reference offerings being 18.7% faster in 3DMark 11, 18.4% faster in GTA V, 18.2% faster in Metro Last Light and up to 21.6% faster than the reference solution in Witcher 3 when running on its standard gaming clock speeds. Along with the cool new design scheme comes the ROG Color-coded load indicator that changes color to reflect the GPU's load level to provide internal glow. The card is expected to launch in November with a estimated price above $699 US which is expected of a non-reference variant.