GALAX showed off their GeForce GTX 980 Ti HOF EX WC and GTX 980 Ti HOF graphics cards at Computex 2015. Both cards are based on custom designs, featuring water and air cooling solutions along with high performance PCB layouts for demanding overclockers and enthusiasts. Both cards are far superior to the reference cards and will be priced superior too, compared to the reference price range of $649 US. 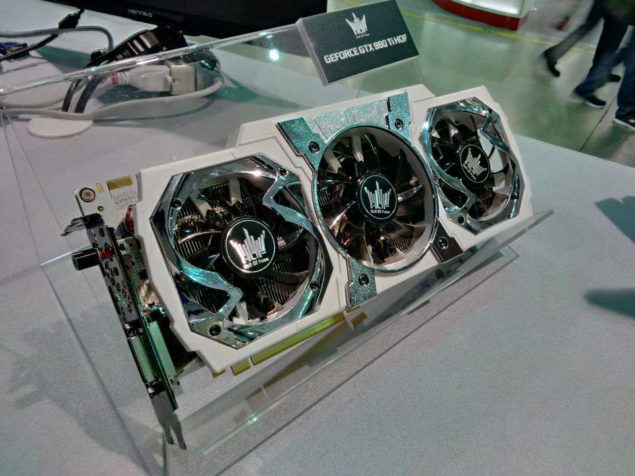 GALAX has long been an outstanding manufacturer of graphics cards, they have some seriously powerful design schemes geared towards overclockers as a part of their HOF brand which shatters records upon records in the OC world. Their cards are also the only ones in the industry to feature a white PCBs which aesthetically look far better than black PCBs due to their overall design scheme. Design is one thing, but GALAX cards also offer a ton of performance at hand. Their latest HOF cards are based on the newest GM200 core which was featured on the GeForce GTX 980 Ti graphics cards.

Both cards have the same technical specifications aside from clock speeds which we don't know yet. Both cards feature two disabled SMMs compared to the GM200-400-A1 on the Titan X. This keeps the core configuration to 2816 cuda cores, 176 texture mapping units and 96 raster operation units. The cards feature 6 GB of GDDR5 VRAM that is clocked at 7 GHz on reference cards to pump out 336 GB/s bandwidth. The clock speeds stated are not true for the GALAX HOF variants since they feature out-of-box memory overclocks that may well be on the range of 1300 - 1400 MHz. 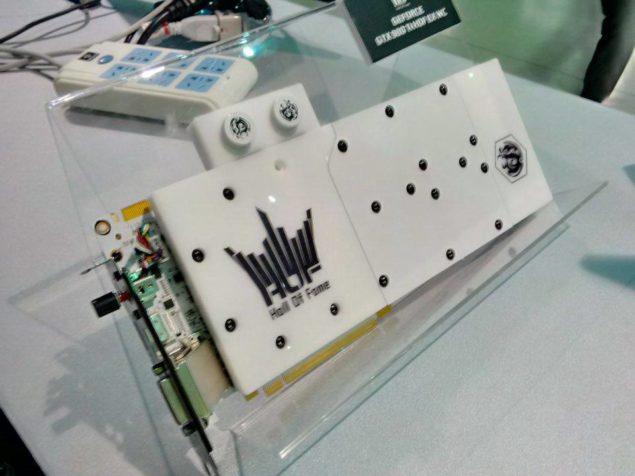 The first card of the two is the GALAX GeForce GTX 980 Ti HOF EX WC which is geared to break some records. The card that features the GM200 core is cooled down by a sexy custom designed waterblock by Bitspower. This cooling black has the large Hall of Fame and bitspower logo embedded on it and looks sweet on the 980 Ti. While we would have wised for GALAX to show off the PCB of this beast, we unfortunately would have to wait a bit but let's take a deeper look at the pictures we currently have. The first thing we notice is that the card has a DVI, a HDMI and three display ports on its rear panel which is the reference Maxwell display configuration. But there's also a knob on the card which is for the Boost BIOS that ups the clock speeds by a simple press that are stored in a second BIOS. The other thing we notice is quite impressive, seen on the back of the card are three 8-Pin connectors. Yes you heard it right, not two but three which shows just how beast of a PCB this card has. You should also notice the positioning of these connectors which is on the back instead of the side to allow better cable management (Good Old Days).

The second card is the GALAX GeForce GTX 980 Ti HOF which has that amazing three fan cooler we have been seeing on several Maxwell and Kepler based cards from GALAXTech. This card has the same display connector scheme, has the overclocking knob we mentioned earlier and come in a full white package as seen on the PCB and the cooler. The card has a hot looking backplate on the back and three PWM fans push air through a large heatsink fin array which is equipped with six 6mm heatpipes that run through the heatsink block. The card is powered by two 8-Pin connectors and like the EX WC, it has factory overclocked specs out-of-box.

It seems like not only ASUS, Gigabyte, ZOTAC and GALAX are after the spot of the highly customized GTX 980 Ti designs. EVGA has teased their GeForce GTX 980 Ti KINGPIN Classified graphics card which comes in a amazing black color scheme and a full copper based heatpipe and heatsink solution. On the other hand, we have MSI preparing their own GeForce GTX 980 Ti DUO Frozr Lightning graphics card which as we remember were beast designs if we look back at the GTX 780 LIGHTNING. The cards are under preparation and will soon be unveiled by both companies. 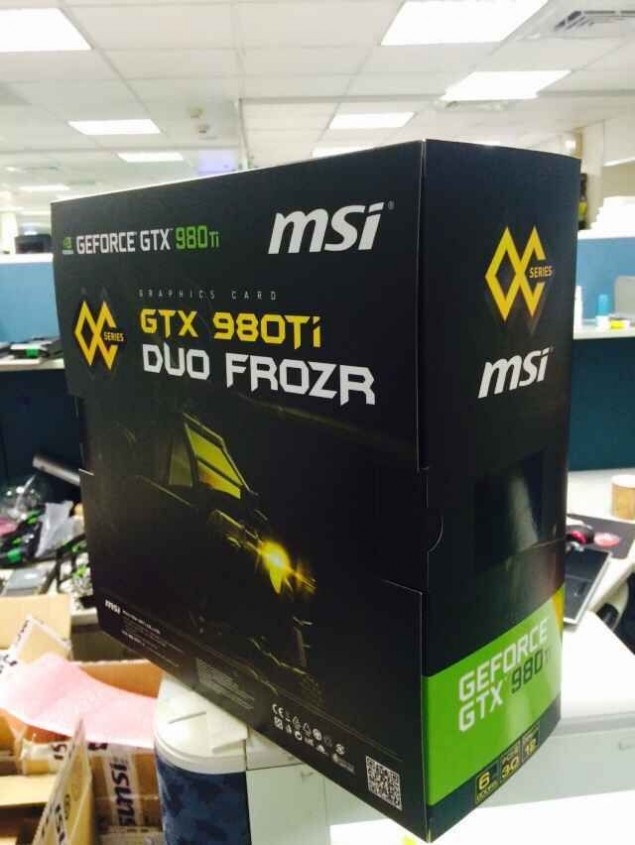