If you had noticed my articles from a few days back regarding Devil's Canyon processors from Intel, you might have noticed that we were the first to mention that the high-end Z97 motherboards were going to launch in future from various manufacturer's. Today at Computex 2014, ASUS went ahead and launched those three high-performance motherboards which true enthusiasts were waiting for that include Z97 ROG Maximus VII Formula, ROG Maximus VII Impact and ROG Crossblade Ranger. 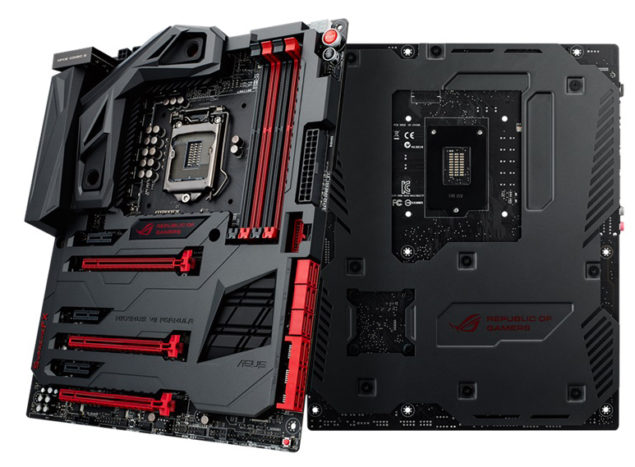 ASUS has launched three high-end ROG "Republic of Gamers" branded motherboards which will be aimed at the overclocking community at different price ranges. We will start off with the high-end ROG Maximus VII Formula motherboard which features the LGA 1150 socket and Z97 PCH.

The motherboard adopts a 8 Phase DIGI+ VRM which is cooled by the massive heatsink that adopts integrated water cooling design. The CPU socket is powered by an 8+4 Pin power configuration while the motherboard itself is powered by the 24-Pin ATX connector. There are four DDR3 DIMMs which offer support of up to 32 GB DDR3 memory with speeds of 3000 MHz (O.C+), right next to the memory slots are two switches for Power On/Off and reset which is accustomed to overclockers and enthusiasts. There's also a diagnostic LED on the top left corner of the board.

Expansion slots include three PCI-e 3.0 x16 and three PCI-e 3.0 x1 slots. There's an M.2 SSD connector hidden beneath the armor plating which needs to be removed to equip an NGFF form factor drive offering speeds of up to 10 GB/s (PCI-e x2 speeds). The board comes with a additional mPCIe Combo III card over at the I/O panel that offers 802.11ac wireless B/G/N connection. The PCH is hidden beneath an angular heatsink while the storage includes 6 SATA 6 GB/s and two SATA Express ports which is impressive. A USB 3.0 header connector can also be spotted next to the storage ports. The ROG Maximus VII Formula also includes the latest SupremeFX onboard audio that features 120dB SNR headphone output with a 600ohm headphone amplifier, and renowned WIMA and ELNA audio capacitors. Differential signal processing with OpAMP and EMI shielding reduce electromagnetic interference, too.

The second board we have in highlights is the Mini-ITX ROG Maximus VII Impact which retains the design and quality standard of the ROG Maximus VI Impact while improving upon it. The Maximus VII Impact features the LGA 1150 socket and the Z97 express chipset. The motherboard features a right-angled VRM board that comes with a 8+2 Phase Digital PWM and is cooled off by a vertical heatsink with an embedded ROG logo. ASUS went with their flagship red and black color theme for the Impact motherboard, a second heatsink is located on the Z97 PCH. From a design perspective, the motherboard looks alot similar to the ASUS’s Z97 ITX board but the ROG product adopts several new features not before seen in any iTX board. Power to the socket is provided by an 8-Pin connector.

First of these features is the introduction of SupremeFX 2104 impact, an add-on sound card which delivers high quality audio and features Headphone AMP, SupremeFX shielding, 120dB SNR and ELNA audio caps. With such an high quality sound card already provided with the motherboard, audiophiles won’t have to buy a secondary audio card. There's a mPCIe Combo IV module which adds 802.11ac wireless connectivity and can even support M.2 interface SSDs though one's which are shorter in length.

The Maximus VII Impact comes with a single PCI-e 3.0 x16 slot which can be used to add in a graphics card. For storage, it offers four SATA 6 GBps ports while two DDR3 DIMM slots offer memory compatibility with capacity upto 16 GB. Now the most interesting part about the Maximus VI Impact is its I/O panel, due to size limitations AMD decided to take off the overclocking switches from the board’s PCB and reconfigured them on a separate Impact control hub which is located on the I/O panel. Tiny but useful, this Impact control hub offers MemOK, Flashback, DeBUG LED and voltage headers in a compact size hub that’s easily within reach and doesn’t require you to open your chassis over and over again to reach the swtiches. Other I/O options include a bunch of USB 3.0 ports, Gigabit LAN, HDMI, DIsplay port, SPDIF and e-SATA. Pricing and release date were not mentioned.

The last motherboard in ASUS's lineup is the ROG Crossblade ranger which adopts a 8 Phase VRM powered by a 8-Pin connector. Now the interesting thing about this board is that its aimed towards the AMD APU crowd and to be precise, the Kaveri APUs. The motherboard comes with the same gorgeous Ranger design scheme of the Z97 counterpart offering a neat red and black color scheme.

Technical overview of the motherboard gives us four DDR3 DIMMs, 8 SATA 6 GB/s ports along with a USB 3.0 header. Expansion slots include three PCI-e 3.0 x16, two PCI-e 3.0 x1 and a single PCI slot. The board comes with the SupremeFX audio scheme and you can see how the audio section of the PCB is isolated from the rest of the board. The ASUS Z97 and FM2+ motherboards are expected to launch in Q3 2014. The exact prices are not known but we'll update you as soon as we have more information.