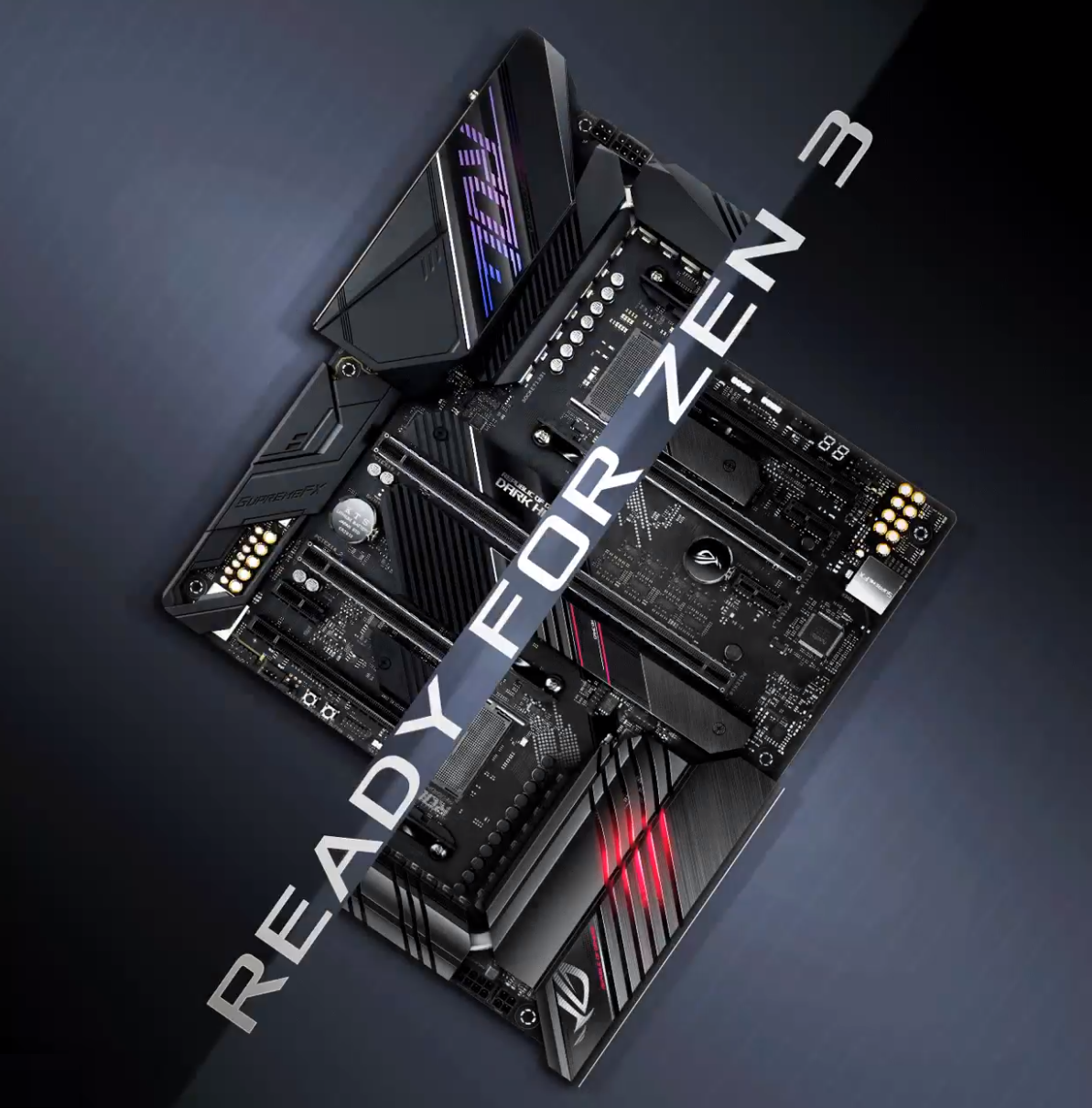 ASUS has unveiled two new motherboards designed to support AMD's next-generation Zen 3 based Ryzen 5000 CPUs, the ROG Crosshair VII DARK Hero, and the ROG STRIX B550-XE. Both motherboards are based on existing X570 & B550 chipsets but come with a range of new tech which will push the Ryzen platform to the next level.

The ASUS ROG motherboards which are launched today are specifically designed for the next-gen Ryzen 5000 CPUs but can also support AMD's 2nd & 3rd Gen processors. Both models are updated variants of existing ones with superior power designs and much better cooling capabilities while providing users with extra I/O.

Are you ready for Zen 3?#ROG is ready!
Two new beefed-up boards have joined our @amd stack. 💪

Starting with the top model, the ASUS ROG Crosshair VIII DARK Hero adopts a high-end 14+2 phase design which is made up of titanium power stages that are rated for 90A. The CPU is supplied juice through an 8+4 pin connector configuration and two large aluminum blocks cover the VRMs which are interconnected by a chunky heatpipe. The AM4 socket sites in the center with four DDR4 DIMM slots at the right side of the motherboard which will be able to support some really high-speed ram speeds. 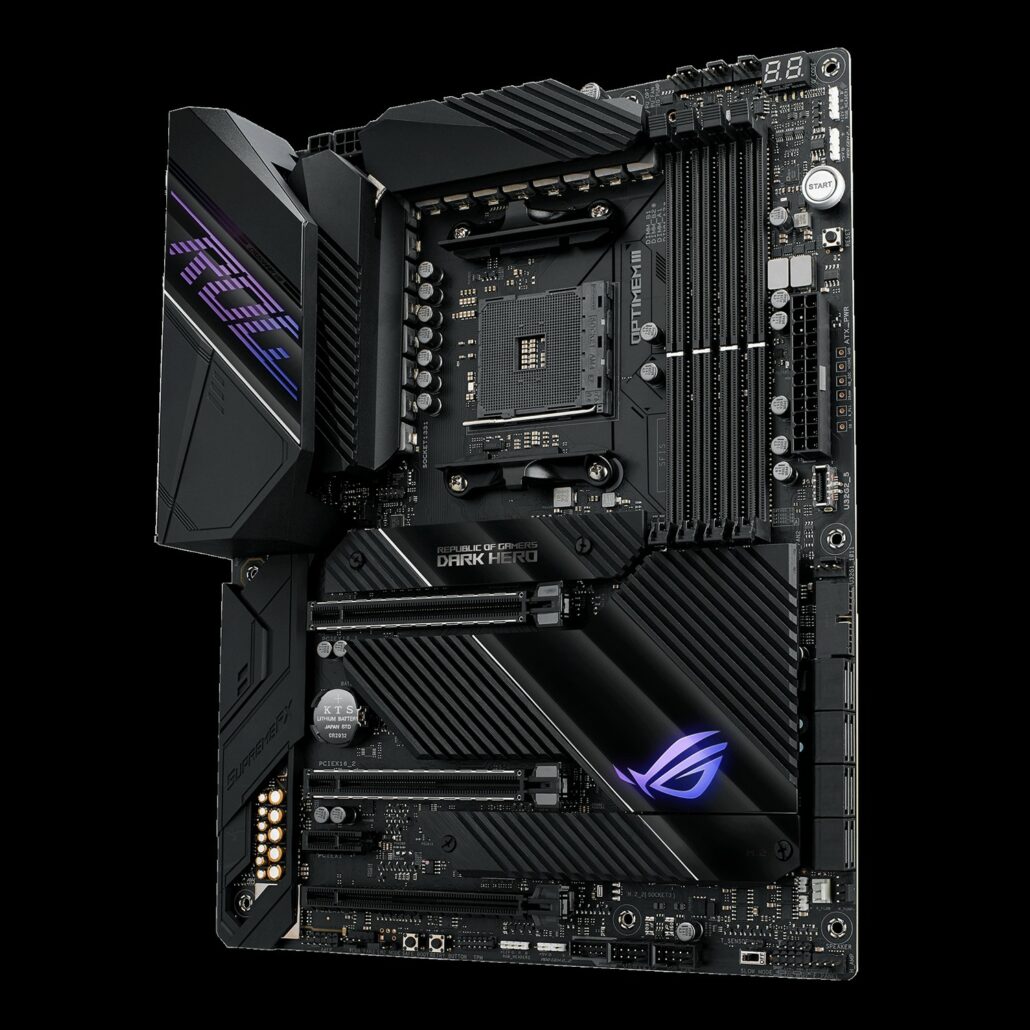 As for the I/O, the ROG Crosshair VIII DARK Hero features WiFi capabilities with 12 USB ports out of which at least 8 are Gen 3.2 and four are Gen 3.1. There's dual LAN switches for 1Gbe and 2.5Gbe networking and a 7.1 channel HD audio jack. It wouldn't be a Crosshair motherboard without the Q-Flash and reset switches on the rear panel either.

The ASUS ROG STRIX B550-XE Gaming WiFi comes with a 14+2 phase power design too & powered by an 8+4 pin connector configuration. The board doesn't use 90A power stages like the Crosshair model but it should be around 50-60A per power stage for this motherboard. The VRMs come with huge aluminum heatsinks which are interconnected via a heat pipe solution. There are once again four DDR4 DIMM slots to support high-frequency memory out of the box. 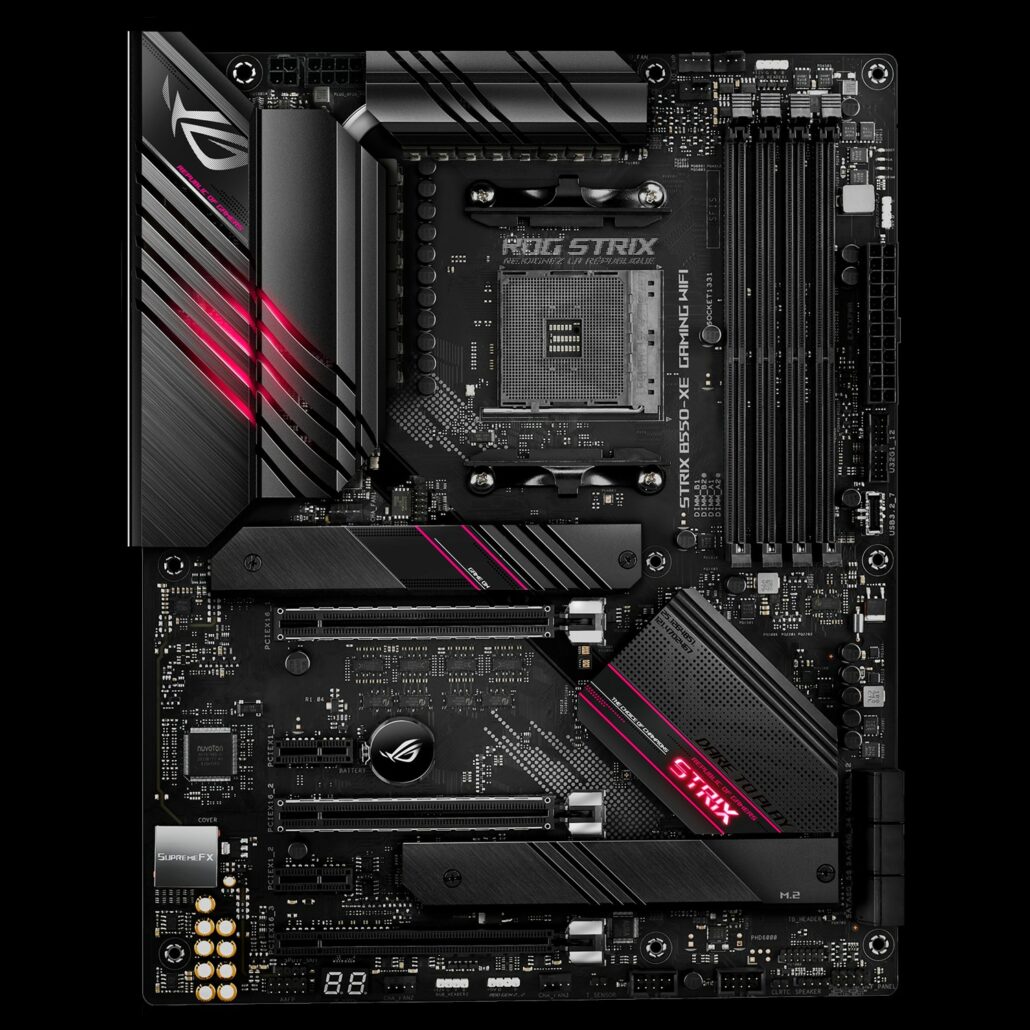 Expansion slots include triple PCIe 4.0 x16 (x8/x8/x4 electrical), two PCIe 4.0 x1 slots and dual M.2 slots. Storage options include 6 SATA III ports while there's a large number of I/O ports on the B550 ROG STRIX XE. Unlike the Crosshair VIII revision, the updated ROG STRIX variant still relies on active cooling in the form of a VRM cooling fan. There's no PCH active cooling solution installed on the board.

There's no word on the pricing or availability of either model but it is likely that ASUS plans to introduce them around the same time as the launch of the AMD Ryzen 5000 series processors.