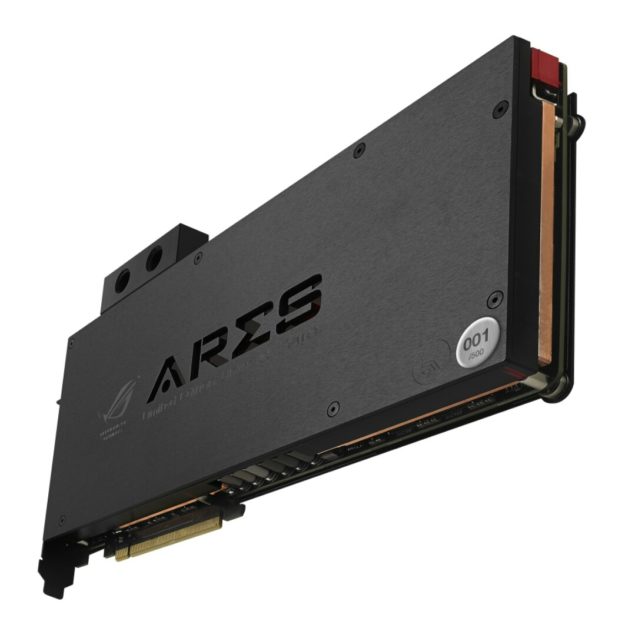 The ASUS ROG ARES III graphics card is a high-end dual GPU card boasting hand picked Hawaii XT cores which are built for mean overclockers. ASUS has moved away from the traditional ARES design and went with a full cover water block from EK Water Blocks which has been featured on top for cooling. The card still uses a custom designed PCB featuring three 8-Pin power connectors and a beefy VRM area that will allow for some monstrous design for overclocking. The ASUS ROG ARES III will feature a fully custom DIGI+ VRM and would include a huge amount of phases (the ARES II featured 20 VRM phases built on the PCB. Aside from the VRM, the card features 8 GB of GDDR5 memory (4 GB per GPU) that runs across a 512-bit x2 interface and clocked at the reference 5 GHz clock speed for Vesuvius. Display outputs include a single DVI, HDMI and a Display port.

As far as cooling is concerned, we have all seen how well the Hawaii GPUs well when they are coupled with water cooling. The best example for this would be AMD's own reference designed Radeon R9 295X2 graphics card. The ASUS ROG ARES III adopts a full cover water block built by EK Water Blocks that covers a single expansion slot (a huge plus point) and as mentioned by PCPER, ASUS claims that the Ares III will “deliver 25% cooler performance than reference R9 295X designs“, but to achieve this ASUS “highly” recommends a high flow rate loop with at least a 120x3 radiator “to extract maximum performance from thecard,” and they “will provide a recommended list of water cooling systems at launch”.

The card is clocked at 1030 MHz and given the design plus cooling, overclockers will be able to achieve around 1100-1200 MHz OC. For what little is mentioned, the ASUS ROG ARES III will be available in Q3 2014 and would have a hefty price tag around the $1999 to $2499 US range. The custom design adds some cost to the reference Radeon R9 295X2 design but the card would still cost less than NVIDIA's GeForce GTX Titan Z which is currently retailing at $2999 US. It is mentioned that only 500 retail samples of the card are being prepared so if you need one, you'll have to grab one earlier. EK Water Blocks also released a custom Radeon R9 295X2 Water block a few days ago, you can find more information on that here. 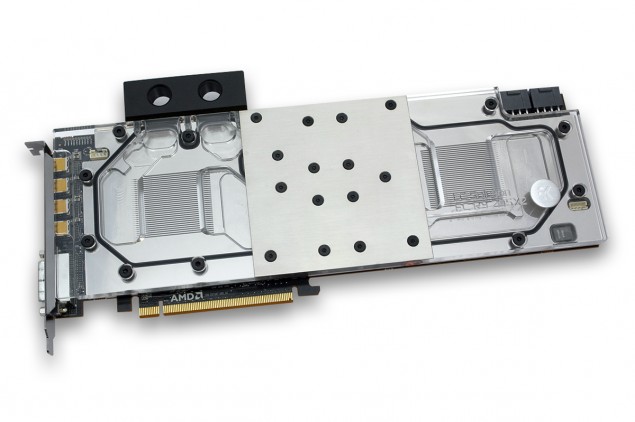 Following image is courtesy of Anandtech! 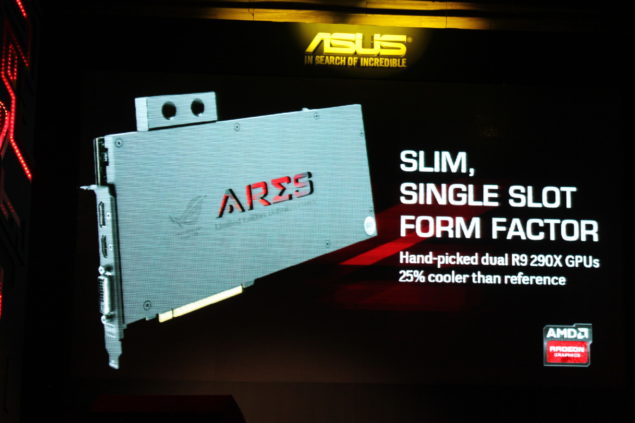