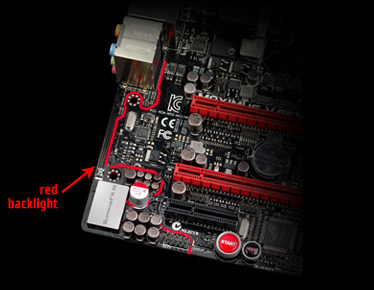 Placed on an entirely separate portion of the GENE’s PCB (as its red backlight shows) and encased within an aluminum EMI shield with a large 1500uF capacitor as its power feed buffer, the SupremeFX III is designed to generate exceptionally high-quality audio up to 110dB SNR. With enhancements from Creative X-Fi Xtreme Fidelity with EAX Advanced HD 5.0, Creative ALchemy and THX TruStudio PRO audio technologies, you’ll feel a true sense of immersion in games and movies.

Intel Gigabit Ethernet is universally renouned for its superior performance and lower CPU overhead (up to 35% compared to other Ethernet chips), while ROG GameFirst software prioritizes networking packets so that games get the lion’s share of the bandwidth, meaning you’ll never miss an online frag again.

mPCIe Combo™ – Give Your GENE A Power Up!

In addition to ROG’s renowned design, extensive set of UEFI BIOS options, and use of premium components, the core of the Maximus V GENE is the Extreme Engine DIGI+ II. With board-wide 10k Black Metallic capacitors these together provide incredible overclocking potential. The 8+4+2 power phases are fully digital, enabling the DIGI+ voltage control chips to talk natively to the system, yielding ultra-precise adjustments for CPU, iGPU and DRAM respectively. Meanwhile its ‘10k’ black metallic capacitors have both 20% better low temperature endurance (great for extreme overclockers using liquid nitrogen), and a 5x longer lifespan that enables 10 thousand hours of operation at 105oC. That’s far toastier than your PC will ever be!

LucidLogix Virtu MVP – The Best of Both Worlds

For more information, Head over to - http://rog.asus.com