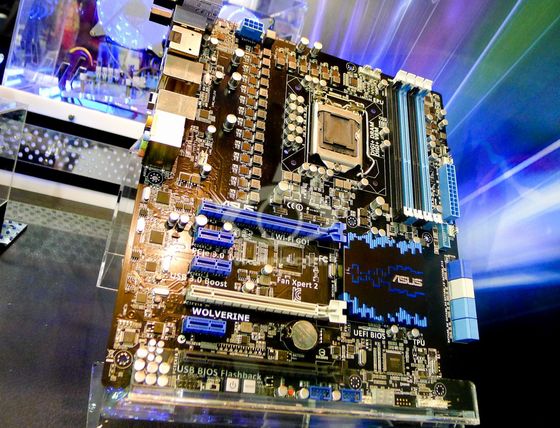 ASUS has brought a lot to show at this year’s Computex. Ranging from its Matrix HD 7970 to the Dual GPU MARS III GTX 680 X2 graphics card, they have left us Hardware enthusiasts in awe. And now we present to you their latest creation. A Z77 motherboard with a massive 40 Phase power design.

The board bears somewhat an uncanny resemblance to the the P8Z77-V series motherboard, but that too besides the huge 40 Phase power design. One can expect these MOSFETs to run cooler as the power is even more divided in between them, possibly to the extent of not needing a heatsink to cool them off at all.

Ironically, silkscreen markings of the drivers and for the PWM controllers had been blackened out all over the board but ASUS insisted that this board has the DIGI+ VRM design used in it.

The board hasn’t entered production but if it does, it’s soon to become the number one choice for overclockers out there in the LGA 1155 platform.