ASUS is preparing their upcoming flagship ROG MATRIX R9 290X Platinum graphics card which will feature the AMD Hawaii XT flagship core coupled with a powerful PCB that will take overclocking to new heights. The card has been teased by ASUS's ROG Nordic Facebook page but we managed to get the pictures of the complete R9 290X Platinum graphics card from the folks over at CoolEnjoy.net. 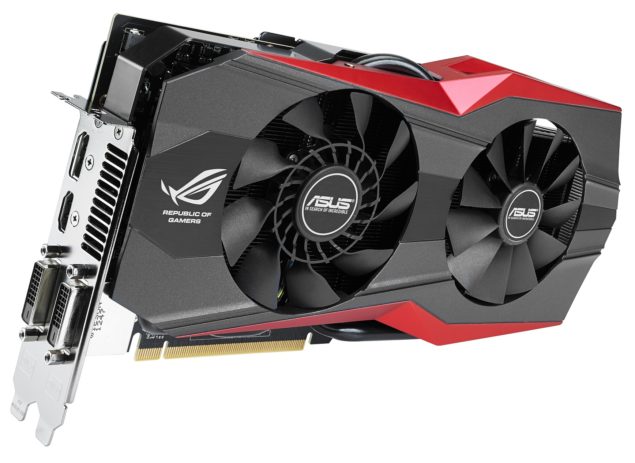 The ASUS ROG MATRIX R9 290X Platinum is the latest creation by ASUS featuring the Hawaii XT core with 2816 Stream processors, 176 TMUs, 64 Render back-ends and 4 GB GDDR5 memory operating along a 512-bit bus interface. The core and memory frequencies would certainly be overclocked out of factory considering the brute assembly featured on this model so we can expect core clock above the 1000 MHz reference clock. This might be ASUS's direct answer to MSI's recently launched Radeon R9 290X Lightning and Sapphire's Radeon R9 290X Vapor X. Each card has its own specialitiy with ASUS's model focusing on power and design, MSI on overclock and brute power while Sapphire focuses on higher VRAM and a powerful PCB design.

From the PCB shots that were teased by ASUS, it looks like the ROG MATRIX R9 290X Platinum features 12 Phases for core and 2+4 Phases for memory with their latest DIGI+ II design featuring the high quality components, ICs, chokes and capacitors to deliver unprecedented performance to overclockers and enthusiasts. Juice is provided through dual 8-Pin connectors so we are looking at a TDP around 300W. The PCB is larger than the reference model due to the custom design and the addition of more phases on the board. The VRMs are cooled by a large black colored heatshrink which offers cooling support.

For cooling, ASUS has went with an all black design heatsink which is a large stack of aluminum fins cooled by two 92mm fans with CoolTech technology similar to the design featured on the DirectCU Mini graphics card. The heat sink features an internal heatpipe design, we can't get an exact number but the one black colored heatpipe that comes out of the heatsink is large and measures around 8-9mm in diameter.

The design of the ASUS ROG MATRIX R9 290X Platinum looks alot similar to ASUS's recent ROG Poseidon offering which featured the GeForce GTX 780 core. The shroud is a mix of black and red colors with a theme design that matches ASUS's ROG scheme. The backside is covered with a full cover heatsink with a large ASUS MATRIX logo while display outputs include the usual Dual-DVI, HDMI and Display port. The ASUS logo on the side lits up since it has a built in LED. The guys over at CoolEnjoy were nice enough to share a video of the card which shows the aesthetics and built quality of the upcoming card: 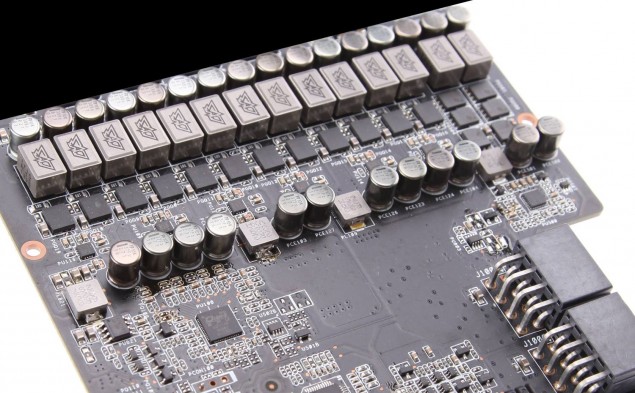 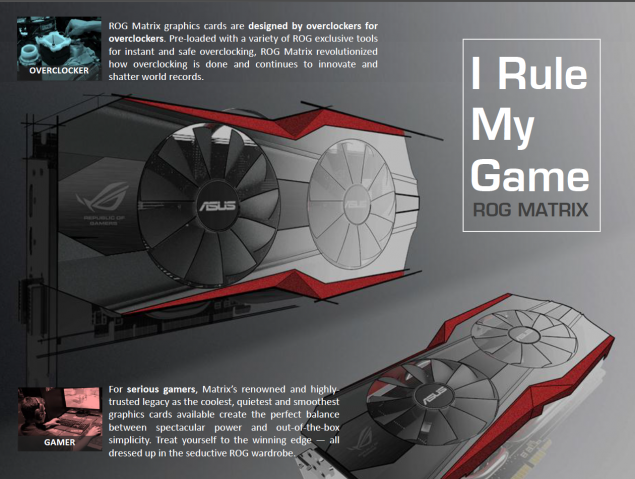 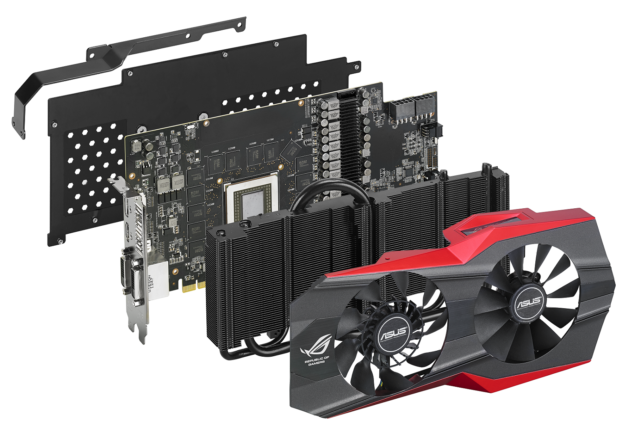 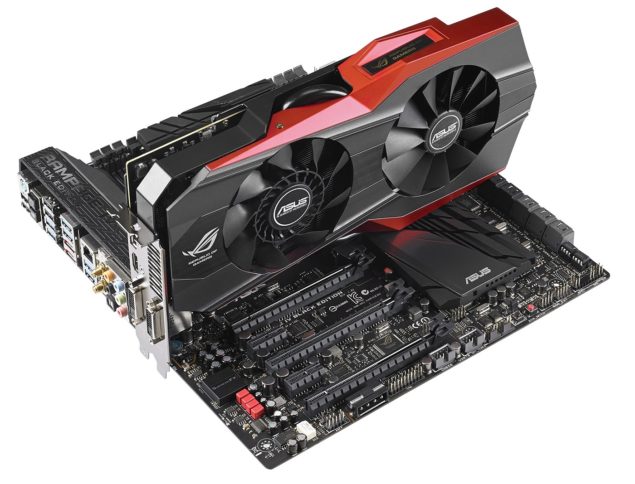 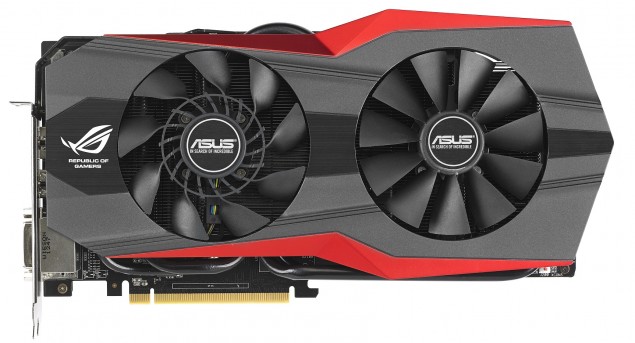 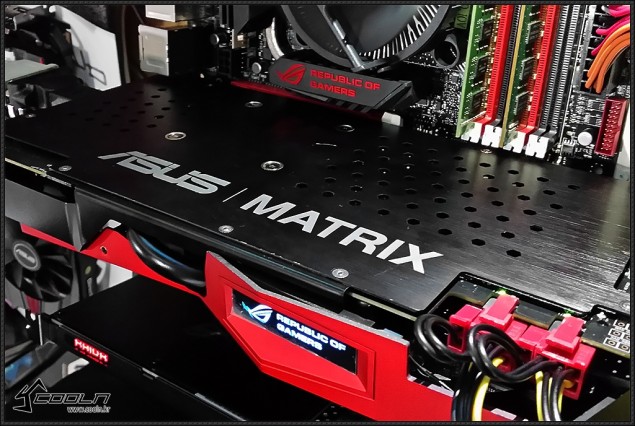 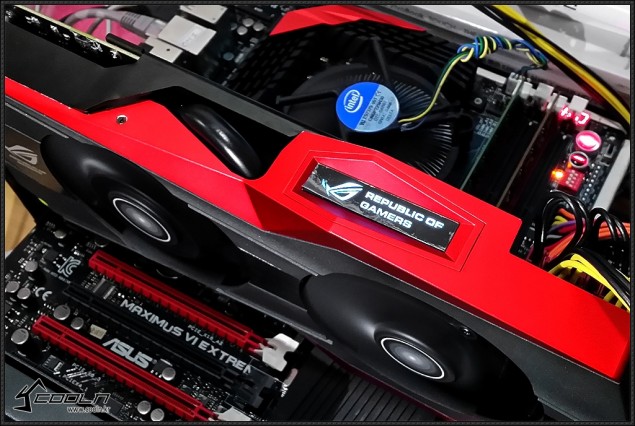 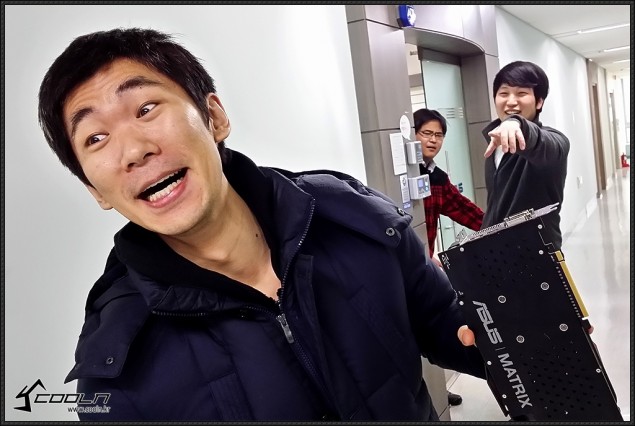