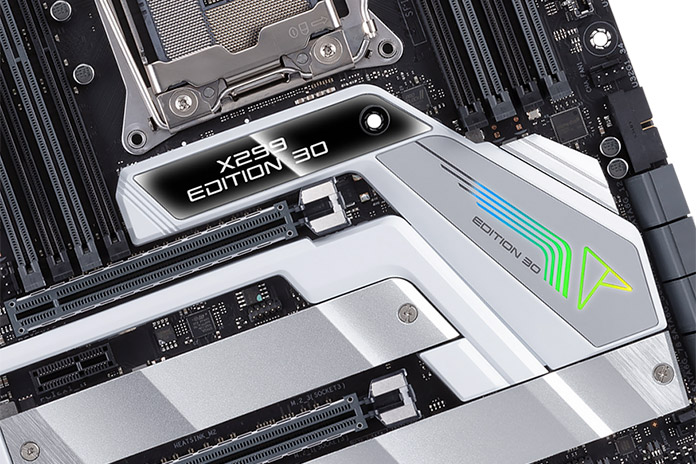 Asus has rewatched 30 years of making motherboards and with that, they have some amazing boards representing this up on display at Computex. They have the Asus Prime X299 Edition 30. The Edition 30 certainly does not miss the mark as it has all the feature we come to expect on the high-end boards from Asus.

The LGA2066 socket is compatible with Core X-Series processors with up to 18 cores, 44 PCI Express lanes, and a 165W TDP. Those specs require serious power, especially if you’re overclocking, so Edition 30 is equipped with a premium power solution. A sweet 16 power stages line up neatly along the top edge of the PCB; they’re cooled well enough to sustain a staggering 544W output, which is more than enough to overclock 18-core CPUs into truly extreme territory. 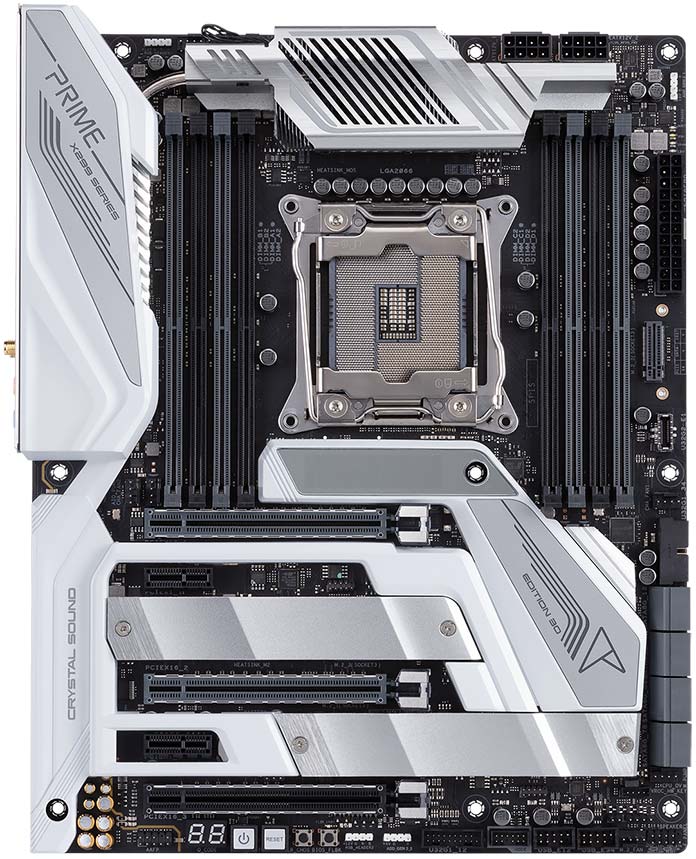 There’s so much juice on tap that the board uses ProCool 12V power connectors with thicker pins capable of carrying more current, plus metal covers for structural reinforcement. Cooling is at the utmost importance on this motherboard as it is meant for overclockers. The VRM has a hidden 40mm fan that spins when needed. The board also supports 128GB of DDR4-4266. To cater to professionals, there are 3 available NVMe M.2 slots.

Its reliable Intel Gigabit Ethernet controller is paired with a faster Aquantia 5G chip capable of much higher throughput on compatible networks. The onboard Wi-Fi module is also the latest Intel Wi-Fi 6 AX200, which is compatible with 802.11ax. Otherwise known as Wi-Fi 6, the new networking protocol pushes peak theoretical bandwidth to an incredible 2.4Gbps.

The audio ports poke through a pre-mounted I/O shield that looks sleeker than traditional designs while also making installation much easier. Dual Thunderbolt 3 ports and accompanying DisplayPort inputs give content creators an easy way to connect chains of external storage and displays. There are plenty of USB ports for high-end rigs loaded with peripherals, including a front-panel header with faster USB 3.2 Gen 2 connectivity for compatible cases.

An onboard audio codec with integrated headphone amplification delivers clear sound for both input and output, while DTS:X Ultra adds spatial audio to enhance games, VR, and extended reality. DTS:X Ultra supports sound based on channels, scenes, and objects to enable deeper sonic immersion in content that takes advantage. To top it all off, the board has integrated RGB lightning and an OLED screen. The motherboard also had a 720p IR webcam to allow login through Windows Hello biometric facial recognition.

This board features all the top of the line features we would expect from Asus. The board will be on display at ASUS’ booth which is booth M0410 at Computex in the Nangang Exhibition Center.