Computex which is held every year in Taipei, Taiwan provides a platform to all hardware manufacturers (big and small) to show their lasts innovative technologies. Asus being one of the top of the line hardware manufacturers including motherboards, graphic cards, etc held a pre-computex conference where it announced the products it will launch for the users on Computex. Here’s a little intro about Asus itself:

A bit about ASUS:

ASUS comes from the last four letters of Pegasus, the winged horse in Greek mythology that represents the inspiration of art and learning. ASUS embodies the strength, creative spirit and purity symbolized by this regal and agile mythical creature, soaring to new heights of quality and innovation with each product it introduces to the market.

ASUS pursues technological and aesthetic perfection through continuous innovation. We place ourselves in our customers’ shoes to develop a deep understanding of, and genuine empathy for, their needs—enabling us to create user experiences that transcend the norm.

We act with a global vision and a focus on local strengths, conditions and heritage.

Now let’s move forward to see the goodies Asus has to offer us.

This Computex we will look at a new high-end motherboard from Asus named Crosshair Formula IV which is an addition to its ROG (Republic of Gamer) Line of motherboards. The motherboard will feature new technologies such as Core Unlocker, Turbo Unlocker and Turbo Key II forming the premise of their TPU core logic, ASUS are bringing overclocking into the mainstream market. The motherboard is based on the AMD 890 FX chip and the motherboard has the AM3 socket which supports the AMD Phenom II, Athlon II and Sempron 100 Series processors. 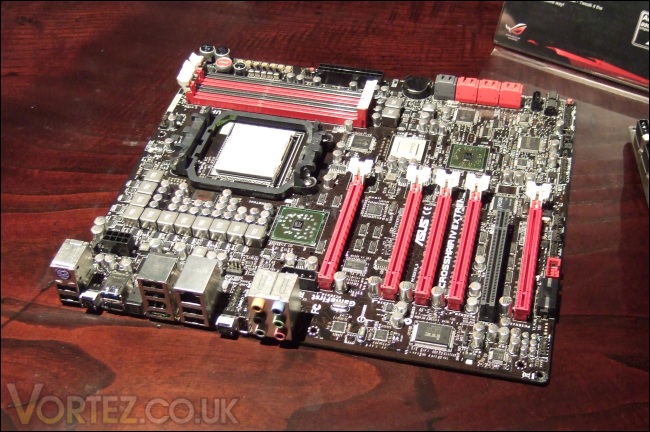 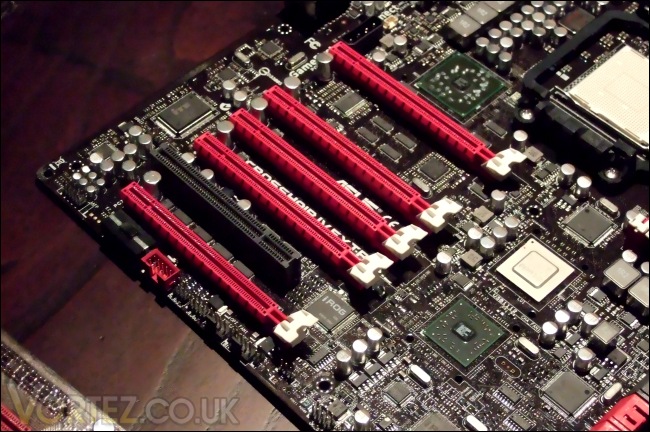 The motherboard offers some of the latest innovations by Asus for their ROG line of motherboards such as ROG connect/RC Bluetooth and Extreme OC zone tools which make you forget about the manual OC and let you OC through a Bluetooth enabled device for OC but user can still OC the traditional way if he wants too. The motherboard also has the latest USB 3.0 and Sata 6gb/s ports.

The motherboard also comes with the Lucid chip. Now to many people it may sound new but Lucid is actually a company which was working on developing a chip which would enable multi-GPU solution on any platform and using any graphics card. It didn't bode well for AMD or Nvidia who saw their own multi-GPU implementation being threatened, more so for Nvidia who required license fees for SLI. But for the consumer it was looking promising, and the prospect of being able to add any additional GPU to their system for a boost in performance was close to becoming a reality. But Lucid’s first chip “Lucid 100” was a total failure due to scaling issues. But with Intel’s funding the company came back with the Lucid 200 chip. This time it got 100% scalability with reference SLI and Crossfire setup and was a success for Muti-GPU setups and according to Asus claims the Lucid 200 setup performs better than AMD’s native crossfire setup. The motherboard will offer 5 pci-e x16 2.0 slots out of which three run at x16 and other two will run at x8 speed and user can add up to 4 Graphic cards for multi-gpu setup. 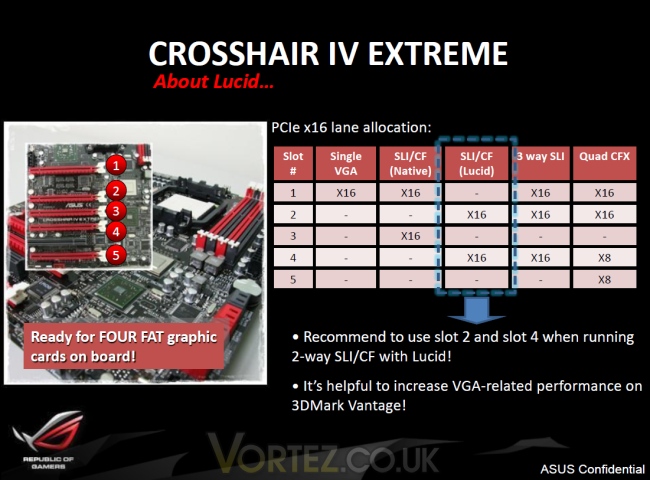 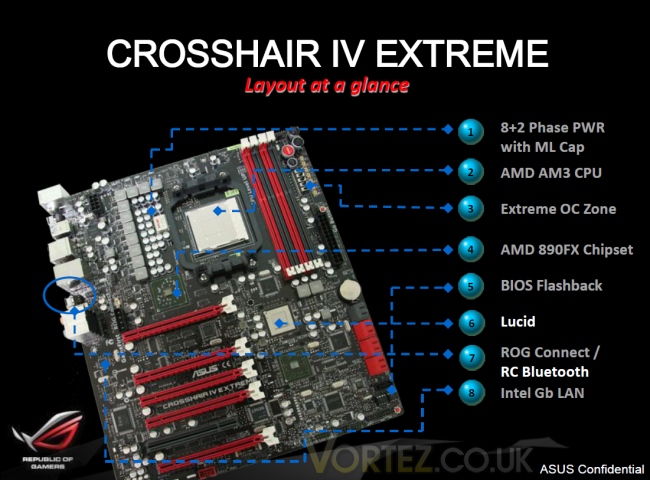 Now its been a long time that Intel has shown its dominance over performance perspective but the AMD 890FX chipset is aimed to change it and coupled with the Lucid 200 chip it’s just time we should wait for.

Let me introduce you to the monster, The massive Asus Ares ROG 5970 with a massive price tag expected to be around 1000€. The card actually may look familiar to a few guys because Asus first attempt for a dual GPU board, the Asus EN7800gt looks the same as the new one. The card also follows the footsteps of Asus Mars which was two GTX 285 in one card (to be superior than GTX 295) and looks like Asus shift its attention to ATI this time. 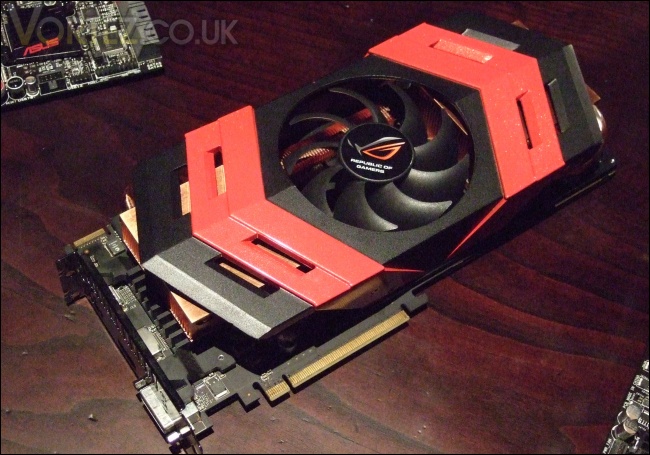 The specs of the new card are as follows:

The most notable changes to the reference HD5970 specifications are the higher engine clock at 850MHz and the 4GB of GDDR5 memory as opposed to 2GB. The Asus Ares may not be the most impressive 5970 (The sapphire HD5970 Toxic Edition holds the lead) but it definitely got the looks and design. The card is really heavy which is due to the custom designed PCB by Asus which has two large copper heat sinks on each core and 4 thick heat pipes which help a lot in keeping the temps of the monster cool. The card has 1x HDMI, 1x Display Port and 1x dual link DVI-I display connectors. 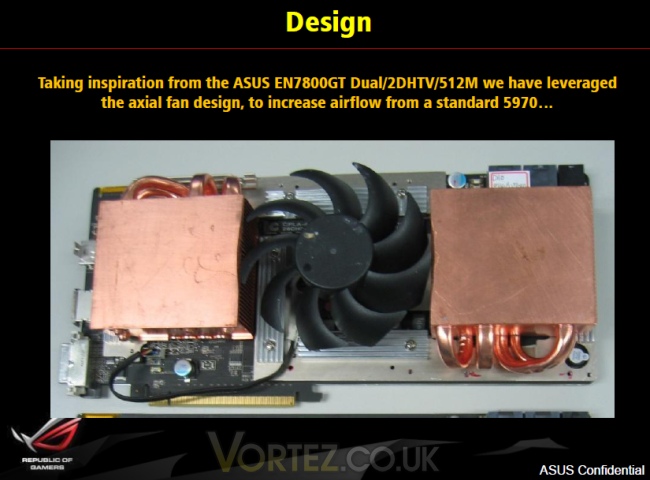 Talking about the power requirements, the card is a beast in that too, it will get its juice by 2 x 8 pin Pci-e connectors and one extra 6-pin pci-e connector which show the power requirements are huge and the card will be a beast in overclocking making it a perfect product of Asus Republic line of gamers and the result of all this is an 25% performance increase over the reference 5970. 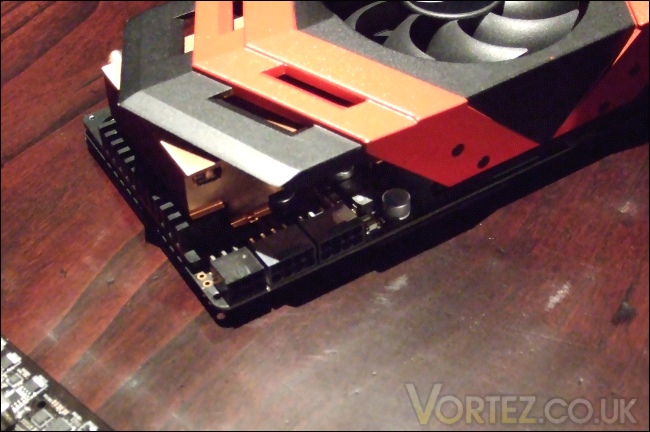 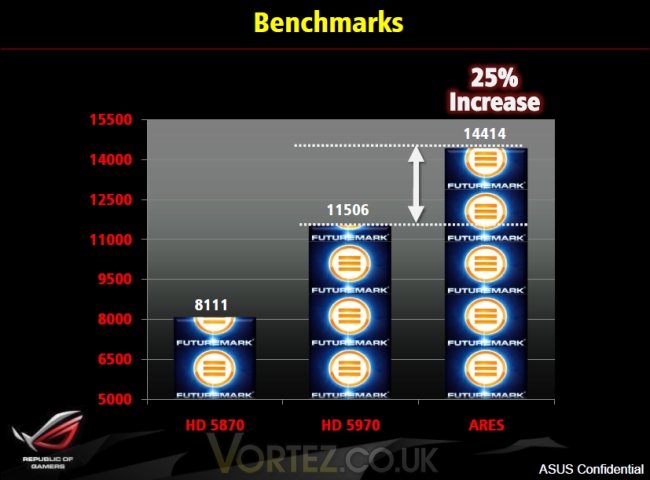 Another new innovation by Asus is the Asus ROG expander. Now what exactly is the need of it? Well, The Rampage III motherboard which was released had lack of support for Quad- SLI setups and it wasn’t good for Asus either as it didn't bode well for them because they also wanted the ultimate board for the benchmark performance crown. Quad SLI support requires the NF200 chips to be present onboard even if a motherboard has enough slots to accommodate 4 dual slotted graphics card, or else it is locked at driver level. Their solution, the ASUS Xpander. 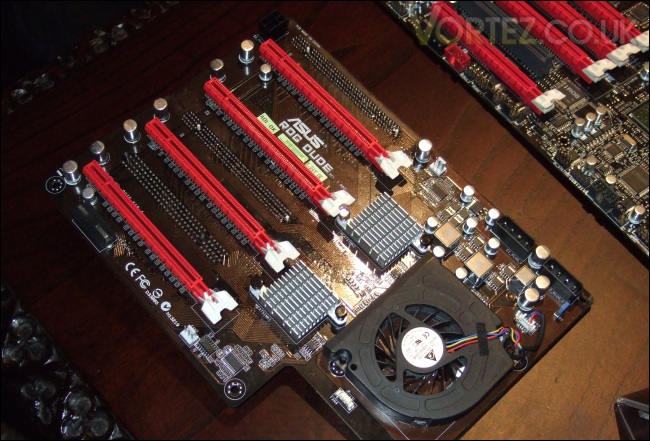 The cooling on the fans is still a prototype with a blower fan which is low profile and the total power consumption. The board also has 3 Molex connectors to provide more juice and one 6-pin power connector. 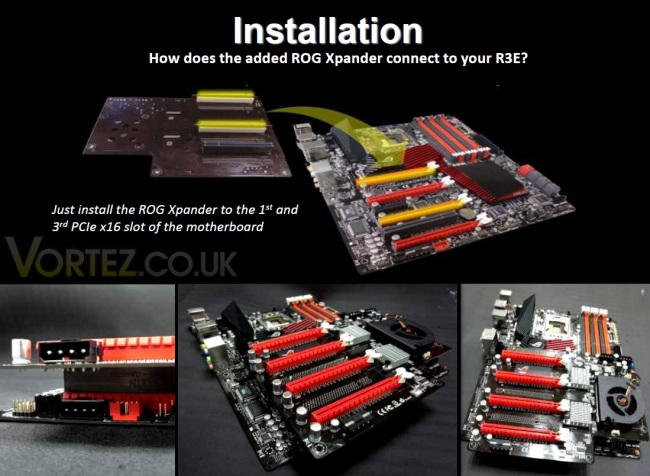 “ASUS claim that the solution is the ideal one and that it yields even better performance results than the competition, the Gigabyte UD9 and the EVGA Classified Quad SLI. While the latter statement will require further proof, we can immediately see their reasoning in opting for a riser board rather than implementing the NF200 chip natively on board the Rampage.

Cost: Only a handful of people will have the opportunity to use quad SLI with four Fermi cards so producing a board that caters solely for those people will reduce the number of boards sold. The design to have the NF200 chips on board also drives the cost of R&D while the extra PCB increases manufacturing costs for XL-ATX boards such as the Gigabyte GA-X58A-UD9 and the EVGA Quad SLI. It's no surprise that both cost upwards of £450. The end result is that the price makes such board inaccessible to the general public. ASUS, on the other hand, wanted a solution that catered for both the public and the ultra enthusiasts so they created two boards. Those who simply want an excellent overclocking board with a boat load of features can buy the relatively cheaper Rampage III Extreme while the enthusiasts who want the best performance and quad SLI can buy the daughter card at an additional cost. Furthermore, ASUS are claiming that the cost of the Rampage III Extreme and the Xpander together will cost less than the competition.

Space: The Gigabyte GA-X58A-UD9 and the EVGA Quad SLI are both XL-ATX motherboards which won't fit in the majority of cases. But then again, they weren't designed to. Instead, they were designed to be used on test benches where an open environment is ideal for LN2 usage and quad SLI. Again, this alienates regular users who might have been interested in the features of those flagship motherboards but don't require quad SLI. Conversely, ASUS still provides a board that's readily accessible to all user and can fit inside most ATC cases, thereby bringing their most innovative features to a wider audience. The Xpander, as the name suggests, expands on the Rampage's capabilities making the combination an attractive prospect for record breakers as well. Sure, the Xpander won't be compatible in cases but as already mentioned, this setup is reserved to the ultra enthusiast and test benches. So, unlike Gigabyte and EVGA, ASUS caters for both the home user and the extreme overclockers.

Performance: ASUS also claim that their Xpander has a performance advantage over the competition. This has yet to be confirmed but if true, it gives them another advantage. This also takes us nicely to their other reason for excluding the NF200 chip. Based on internal testing, ASUS found that the Rampage III Extreme with tri SLI at x16/x16/x16 using an NF200 chip performed worse than a regular board operating at x16/x8/x8. From the graph, the difference is a mere 1.48% but for benchers across the world, Tesco's motto certainly holds true; "Every little helps". The overhead from higher latencies on the NF200 chip is to blame for this so by opting it out, the Rampage III Extreme promises to run cooler, perform better and cost less.” 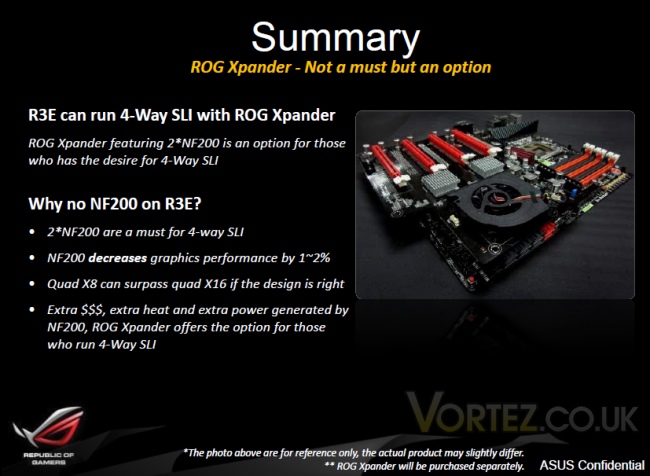 Asus will also show its new high-end motherboard which is also the latest entry in its premium ROG “Republic of Gamers” line. The board is a micro-ATX form factor which is known by its “Gene” identifier. Rampage III comes with the latest LGA 1366 socket to support Intel’s latest Core i7 processors and is based on the X58 chipset. The Rampage III offers many new technologies over its predecessor Rampage II like support for USB 3.0, Sata 6 Gb/s and Asus ROG connect etc. The CPU is powered by an 8-phase PWM circuit, 2-phase for the six DDR3 DIMM slots for triple-channel memory support. 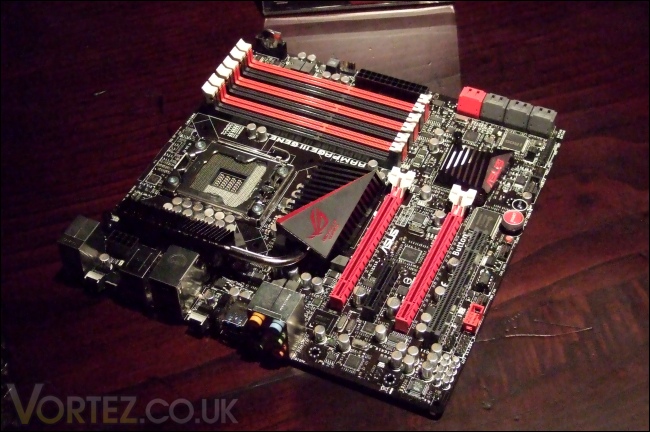 Now all we can say is that this Computex will be awesome not only by Asus sides but also other leading manufacture’s and users will surely get a taste of what’s new for them.