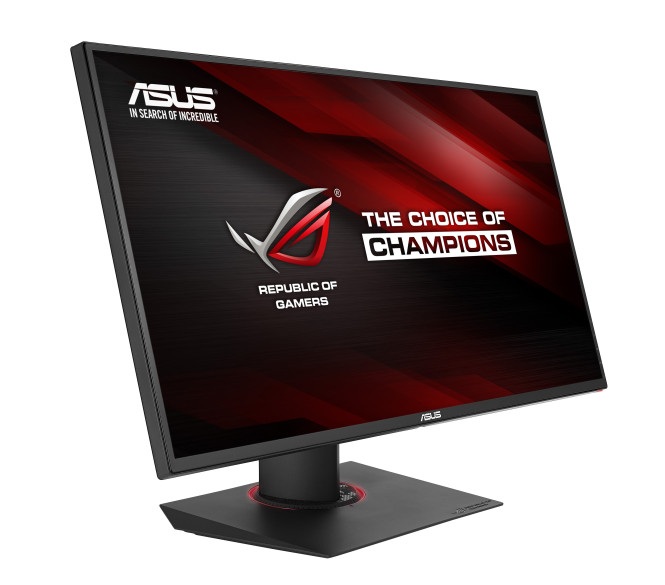 Asus has introduced a new range of gaming monitors consisting of two models. Leading the duo is the ROG Swift PG27AQ. A beautiful 27 inch Nvidia G-Sync capable gaming monitor. Based on the ever so popular IPS panel technology, the display has incredibly accurate color reproduction and very wide viewing angles. The monitor stand features a wide range of adjustments including full tilt, swivel, pivot and height adjustment. It also includes a very neat cable management system. Asus did not reveal the response time for this particular monitor.

In addition to the new 4K model Asus has also introduced a new QHD (2560x1440) model MG279Q. It's IPS based just like the 4K ROG Swift however it features a more impressive 120Hz refresh rate and a 5ms grey to grey response time. Unfortunately it does not support G-Sync like its older 4K sibling. Although interestingly enough it supports DisplayPort 1.2a plus, which indicates that Asus can introduce a version with FreeSync later on. There is still no word on pricing or availability for either monitor yet.

On a slightly different note, AMD along with its partners announced yesterday via a press release the introduction of ten monitors with support for the company's FreeSync variable refresh rate technology based on the DisplayPort 1.2a standard dubbed Adaptive-Sync.

Some will be available as soon as this month and all will be available to purchase at some point before the end of March. I can confirm that both monitors from LG are IPS based and the three UE850 models from Samsung are based on the virtually identical competing panel technology from Samsung, PLS.

The grand majority of gaming monitors including ones with variable refresh rate capability (G-Sync and FreeSync) have been based on TN (Twisted Nematic) display panels for the most part. This is primarily due to the high refresh rates and low response times that until now were only achievable on TN panels. However thanks to the continued work on IPS the panel technology has seen significant improvements in response times and refresh rates.

While IPS has become significantly cheaper to produce it is still notably more expensive to make than TN. So even though it may prove to be a superior solution, TN still holds an interesting value proposition. Which means that we will still see many TN based gaming monitors introduced by the industry players. Mostly to offer a decent and more affordable alternative to the IPS based solutions.