The whole process of looking at distant stars and planets is not really easy. Astronomers are required to calibrate their equipment in order to look at those distant stars and planets because it is not possible to look at them through Earth’s blurry atmosphere. The calibration is not that easy, and the complex process requires the astronomers to make artificial stars which they call ‘guide stars’ using really big lasers.

What researchers from the European Southern Observatory’s (ESO) Paranal Observatory in Chile have done is that they have made one of the most powerful artificial stars to date. They named the whole system as Four Laser Guide Start Facility (4LGSF). This recently developed system which has been under testing since September last year is very unique in a way that it works by shooting four 29.9 centimeter , 22 watt beams in the atmosphere just to spot the sky.

As the team explains:

"The Four Laser Guide Star Facility (4LGSF) shines four 22-watt laser beams into the sky to create artificial guide stars by making sodium atoms in the upper atmosphere glow so that they look just like real stars. The artificial stars allow the adaptive optics systems to compensate for the blurring caused by the Earth’s atmosphere and so that the telescope can create sharp images."

According to a report from Heater Gross for Air & Space, if there are no guiding stars for astronomers to work with then the quality of the images they get is compromised and the images tend to be blurry and quite often useless. The systems are generally called adaptive optics because of the way they work. 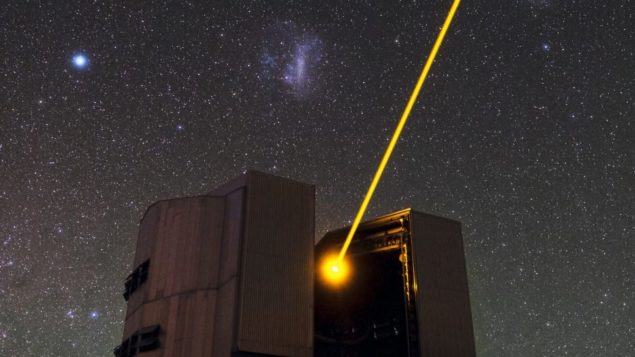 The first ever guiding star idea came about back in 1950s but the researchers did not make this idea into a reality until the 1990s because they lacked the necessary equipment required.

"The atmosphere is complex and always changing, so a supercomputer is needed to monitor the changes," says Goss. "The computer then sends instructions to a deformable mirror to bend in such a way that the light’s wave straightens when it’s reflected."

Now that we have such a powerful laser system, researchers will be able to capture images with extremely clear quality. The image will also unfold some of the mysteries of the Universe by taking great quality images of distant objects in space.