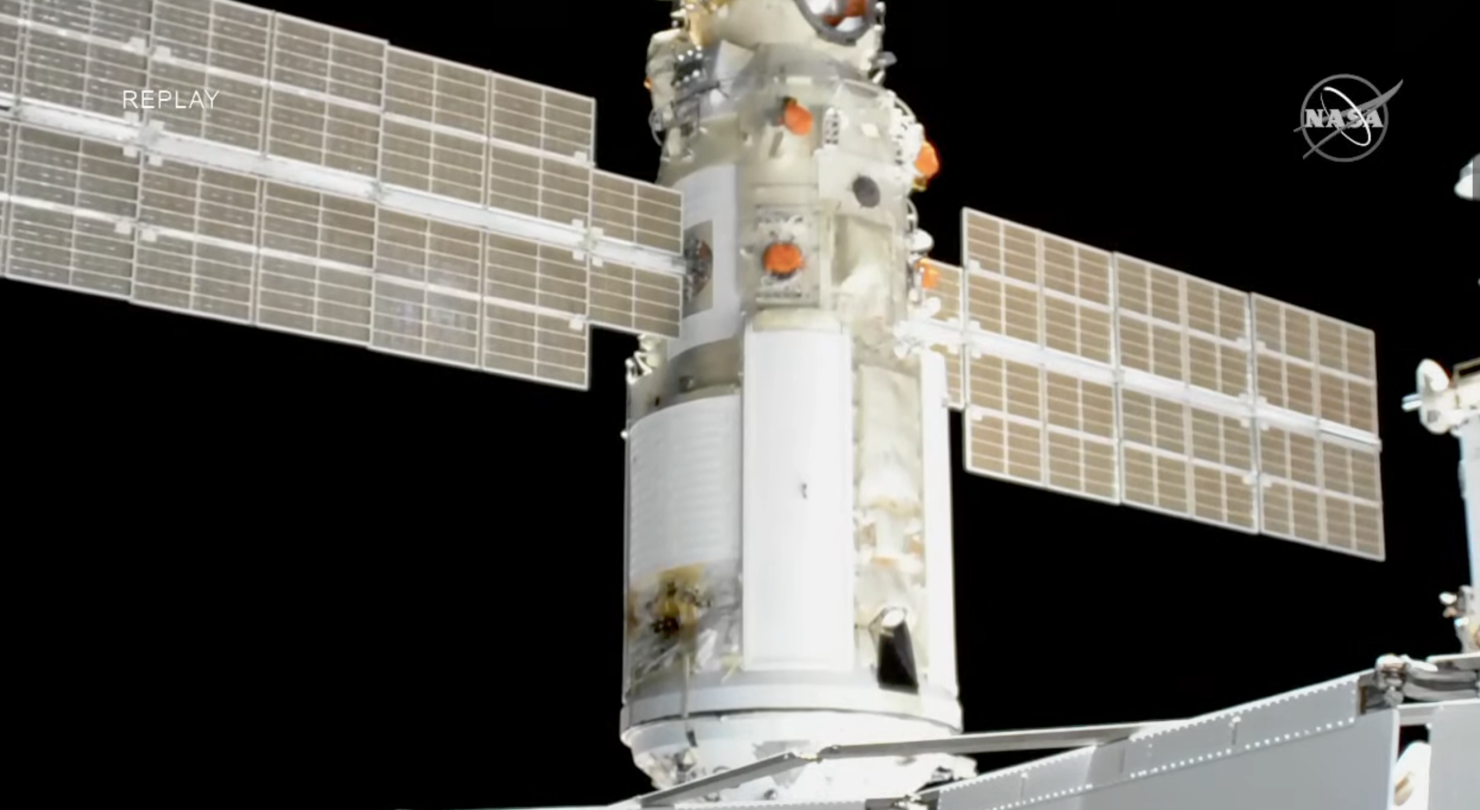 The Nauka module as it docked with the International Space Station (ISS) today. Image: NASA TV

Astronauts onboard the International Space Station (ISS) received a scare earlier today when the orbiting space laboratory went off orientation after a new module unexpectedly fired its thrusters soon after docking. The accident took place at 11:45 CT after the Russian module Nauka, which docked with the space station earlier today, engaged its propulsion system as it was being integrated with the station. After the thrusters fired, the ISS changed its orientation by 45 degrees according to a NASA spokesperson and the error was corrected when the Russian Zvezda module fired its thrusters to reorient the spacecraft. The NASA spokesperson also stressed that astronauts on the station were not in danger at any time during the event and the thruster firings stopped soon after the accident.

NASA started sharing the updates for the accident at 13:30 EDT today, with the space agency's public affairs officer Rob Navas outlining the event by detailing that:

Good afternoon from mission control in Houston and the International Space Station flight control room rejoining our coverage following this morning's rendezvous and docking of the Nauka multi-purpose laboratory module to the International Space Station. At docking occurred this morning at 8:29 AM Central Time, 9:29 AM Eastern Time. Over the course of the next three hours after docking, Russian cosmonauts Oleg Novi and Pyodre Duvidov of the Expedition 65 crew were conducting routine leak checks of the interface between the Nauka multipurpose laboratory module and the International Space Station and opened the hatch on the Zvezda service module side of the docking interface and Russian flight controllers along with the two cosmonauts were in the process of integrating. Other commanding activities between the newly arrived MLM or the Nauka and the Zvezda service module.

At 11:45 AM Central Time, the Nauka multi-purpose laboratory module's thrusters began to fire inadvertently and unexpectedly. And that resulted in the International Space Station going about 45 degrees out of attitude. The crew was never in any danger. The flight control team here in Houston immediately acknowledged the situation. The crew began to work recovery operations onboard to regain attitude. The ISS Progress 78 cargo ship that is docked to the Poisk module on the zenith side of the International Space Station's Russian segment was brought into play by the Russian flight control team who responded very quickly. 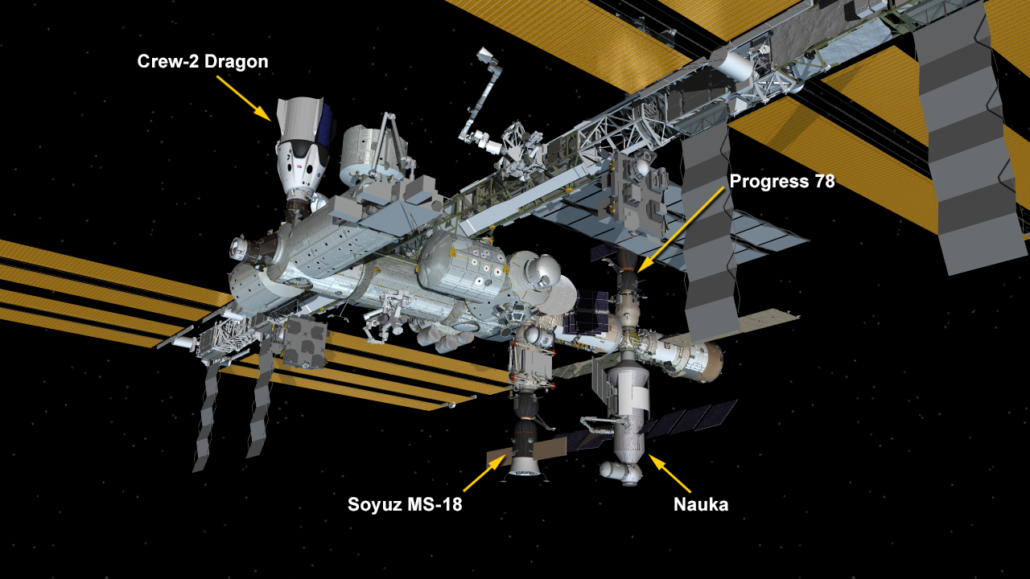 A diagram of the International Space Station (ISS) with various vehicles the module docked to it. Image: NASA

The Progress thrusters fired and attitude has now been regained. So the station is back normal attitude configuration while the Russian flight control team works through procedures and ponders how to stop and arrest the thruster firings of the Multi-Purpose Laboratory module. Initially, the Zvezda service module picked up on the fact that we were headed out of attitude control and began to counter balance the thruster firings of the Nauka to begin the process of regaining attitude control that then was handed over to the ISS Progress 78 cargo ship that took over the job of regaining attitude control.

There's no explanation to this point as to what precipitated the inadvertent thruster firings on the Multi-Purpose Laboratory module, but the Russian flight control team has indicated that when we come back over Russian ground stations about thirty minutes from now they should be able to send commands to the Multi-Purpose Laboratory module to disable those thrusters on the MLM and prevent any re-occurrence of inadvertent thruster firings that again occurred 45 minutes ago at 11:45 AM Central Time.

Roughly an hour after the misfiring started, Navias confirmed that they had stopped and that the station had regained attitude. In spaceflight terminology, the attitude of a spacecraft refers to its orientation with respect to another body.

At the same time, the Russian ground controllers started to plan to reconfigure the Nauka's propulsion system as the station passed over a Russian ground station. The new module is 43 feet long and weighs roughly 22 tons. The misfiring started as it was integrating with the ISS' computers and the cause of the occurrence is unclear as of now. Once the ground station pass was completed, the Russian flight controllers successfully reconfigured the new module to prevent such misfiring in the future.