An Asteroid Will Pass Really Close To Earth Next Month!

The start of next month will bring something exciting for everyone. A small asteroid will pass so close to Earth that we might be able to see it in the sky. NASA announced a few days ago that a 30 meter (100 ft) wide asteroid will be passing by Earth on the 5th of March and it will be close.

No need to panic! We’re pretty safe according to the odds

But you start freaking out and looking for places to hide from the fear, NASA has said that there’s no chance that the asteroid will smash into Earth. Sigh of relief for everyone! NASA is still trying to determine exactly how close the asteroid will come to Earth and one estimate is around 11,000 miles (18,000 km) away. At this distance the asteroid will be easily viewable with a telescope and to make things easy for you this distance is about one twentieth of the distance from Earth to the Moon.

As NASA is still trying to figure out the exact distance the asteroid will pass relative to Earth, another alternative and big estimate of 9 million miles (14 million km) has also been given. The reason for these two widespread differences in estimates is that NASA only discovered the asteroid about 3 years ago and thus the name 2013 TX68. Scientists haven’t had enough time to observe the asteroid because when it was first spotted it was on the night side of Earth and was easily monitored, but three days later it moved to the day time side which made monitoring very difficult. 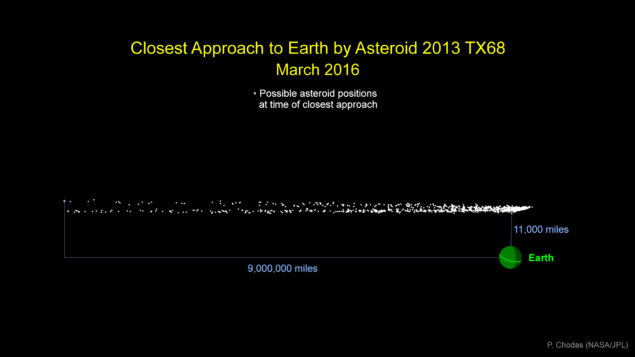 Scientists in NASA have in a very short time span been able to get a rough idea of the possible trajectories of the asteroid, but these ideas have some margin for error. This makes it difficult to pinpoint exactly whether the asteroid will pass really close to view easily or will be pass really far away.

"This asteroid’s orbit is quite uncertain, and it will be hard to predict where to look for it," said Paul Chodas, the manager of NASA's Centre for Near Earth Object Studies. "There is a chance that the asteroid will be picked up by our asteroid search telescopes when it safely flies past us next month, providing us with data to more precisely define its orbit around the Sun."

Scientists at NASA’s Center for NEO Studies (CNEOS) at the Jet propulsion laboratory in Pasadena, California have found out no chance of any contact with Earth in next month’s flyby. But they have found out that this asteroid could impact Earth in September 28th 2017 but the chances of that are also very minute with a chance of collision of no more than 1 in 250 million. So you don’t need to worry about anything!

"The possibilities of collision on any of the three future flyby dates are far too small to be of any real concern," said Chodas. "I fully expect any future observations to reduce the probability even more."

As far as the matter of a collision goes you can further read about it in NASA's official feature, let us know what you think about this in the comments below.

A 30 Metre Long Asteroid Will Flyby Earth In A Few Days!