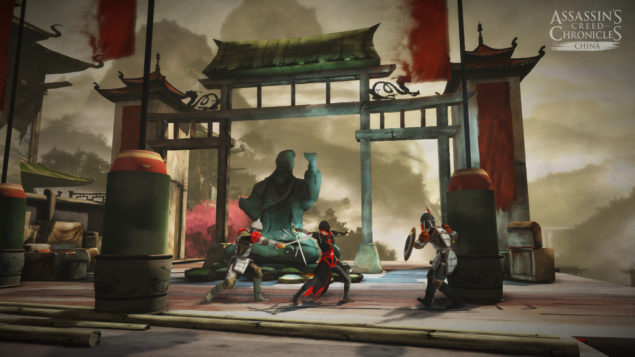 The Assassin's Creed Chronicles Trilogy, which gets a physical release next month, has been rated for violence, bad language and a little bit of blood.

The title, which combines all three spin-off titles into a single release, was awarded a Teen rating.

As surprising that it is that a game with the word 'assassin' in the title has violence in it, there's other parts of the rating that could be quite interesting.

This is a collection of three action-platfomers in which players assume the role of assassins as they fight against the Templar Order. As players traverse various environments, they use blades, swords, and firearms to kill enemy soldiers and human targets. Players can also use stealth attacks (e.g., neck breaking; stabbing enemies from behind) to dispatch characters. In some sequences, players use a targeting crosshair to kill enemy soldiers with a sniper rifle. Quick blood-splatter effects occur throughout the game; blood stains also appear on the ground. The word “sh*t” is heard in the dialogue.

The sniper rifle segment is likely from the as of yet unreleased Russian segment on the spin-off.

Ubisoft announced last month that a physical compilation of the three Chronicles games would make its way to Xbox One, PlayStation 4, PlayStation Vita.

The collection will be released on February 9th.