That's right folks Joystiq has just unveiled a TRULY unique crossover Ninja Raiden who stars in Metal Gear Solid 4 and is the head honcho of Konami's upcoming smash hit Metal Gear Solid: Rising is an unlockable character in the soon to be released Assassins Creed Brotherhood. The sad news is he is not a super fast ninja but is a unlockable skin for Ezio Auditore the star of the game. 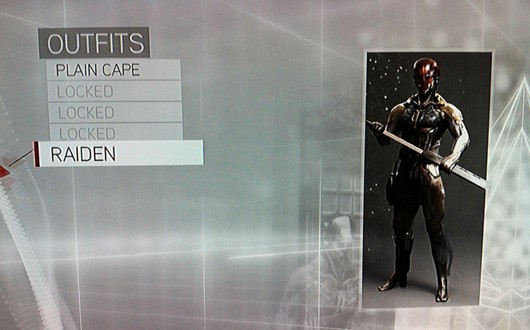 as you can see from the above shots you can indeed give Ezio a WHOLE new look and make him look even more bad ass than before I mean who wouldn't want to look like a futuristic ninja who has a nanobot regenerating sword with a matching high frequency blade? As a fan of the MGS series and the Assassins Creed Series this game has definitely topped my must want list after Black Ops.

To unlock Ninja Raiden skin all you have to do is complete training, not so difficult but I'll do anything to unlock that skin to make my playthrough even more awesome 😀