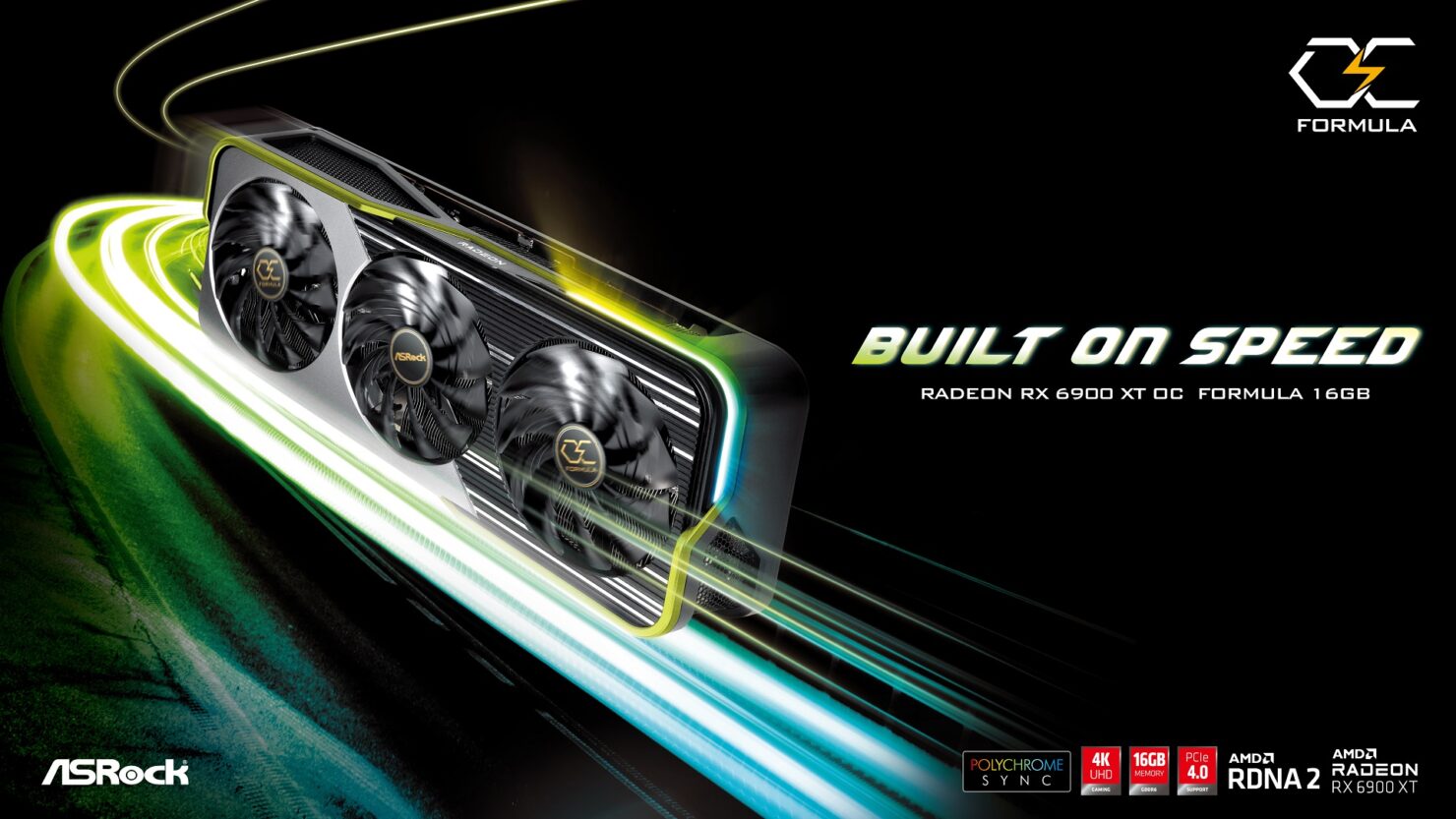 ASRock has finally unleashed its flagship AMD graphics card, the Radeon RX 6900 XT OC Formula. This is the first time that the OC Formula brand has landed on ASRock's graphics cards lineup and it's done so in a grand way by fusing in with AMD's Big Navi GPU.

The ASRock Radeon RX 6900 XT is a beast of a card featuring the full-fat Big Navi 21 XTXH GPU. The GPU runs at blistering fast clock speeds of up to 2295 MHz Game and 2475 MHz boost, making this the fastest Big Navi custom design to date. For users who want a silent operation, the card also has a silent mode (Q BIOS) which lets the card run at a more conservative 2165 MHz Game & 2365 MHz boost clock. The card retains its 16 GB GDDR6 memory which operates across a 256-bit wide bus & also features 128 MB of Infinity Cache onboard the GPU.

To put things into perspective, the currently fastest AMD Radeon RX 6900 XT Big Navi graphics card was the recently introduced Red Devil Ultimate from PowerColor which features a boost clock of up to 2425 MHz. The ASRock RX 6900 XT OC Formula is 50 MHz faster than that which is impressive.

Some of the highlighted features of the ASRock Radeon RX 6900 XT OC Formula graphics card include:

With the internal specifications done, let's talk about the card itself. The ASRock Radeon RX 6900 XT OC Formula comes with a massive triple-slot and triple-fan design. It features a metallic silver front shroud that also features a green-colored side skirt that covers the sides of the card and offers an elegant feel. The card also makes use of RGB LEDs on the backside which are compliant with the ASRock Polychrome Sync RGB technology. The back of the card features a full-metal and full-cover backplate which has cut-outs on the rear end to allow air to be vented out.

The ASRock Radeon RX 6900 XT OC Formula keeps things extreme with a monstrous 21 phase PCB design (90A Power Chokes) which is powered by triple 8-pin connectors. The card is cooled off by a massive aluminum-finned heatsink with seven heat pipes running through it. The V-shaped fins and air vents allow air to pass through more efficiently. The GPU contact area is made of a nickel-plated copper base plate which improves thermal dissipation.

Other than that, the card features the standard triple DisplayPort 1.4 and a single HDMI 2.1 VRR outputs. The card looks amazing but will definitely require a lot of room as it measures an insane 332x137x61mm (lxhxw).

ASRock hasn't provided an official launch date or pricing for the card yet but it should be really hard to get your hands on one of these beasts and even if you manage to find one, expect to be paying over $2000 US for this insanely powerful Radeon RX 6900 XT custom design which ASRock has unleashed upon us.