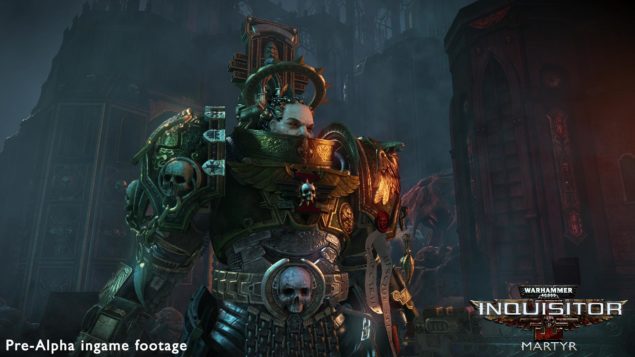 Among the many games in developments under the Warhammer IP, Warhammer 40K Inquisitor - Martyr might be one of the less known to the public.

This Action RPG is being crafted by Hungarian developer Neocore Games, which has a certain experience with the genre after The Incredible Adventures of Van Helsing I, II and III. First announced in July 2015 with a planned release in 2016, we just learned that the game has been delayed to next year: Narrative Designer Viktor Juhasz confirmed as much to Angry Joe at the very end of his video preview. Juhasz also added that the PC version will launch first, with PlayStation 4 and Xbox One ports due later.

Warhammer 40K Inquisitor - Martyr, as suggested by the title, will allow players to become an Agent of the Emperor's Inquisition. There will be a full single player campaign with a horror vibe (the protagonist will be on a ghost ship trying to figure out what happened to it), but even more interesting is what the developer is planning beyond the single player.

After the end of the campaign the story continues in a colossal sandboxed game set in the same secluded sector of this vast universe. This persistent setting grants years of constant entertainment, gradual development and a continuous flow of content that enriches the Action-RPG gameplay.

In this sandbox mode of Warhammer 40K Inquisitor Martyr you'll be able to join up with up to seven friends (for a party of eight players in total) to take on harder challenges, which obviously will yield better loot. While there won't be a direct PvP mode since Inquisitors don't really attack each other, Neocore wants to represent the ongoing schemes within the Inquisition by allowing Inquisitors to attack each other's stronghold. Each Inquisitor will be able to set up challenges (and, we assume, various kinds of traps) for potential invaders.

We'll keep an eye on this Action RPG set in the Warhammer 40K universe. Stay tuned for more.